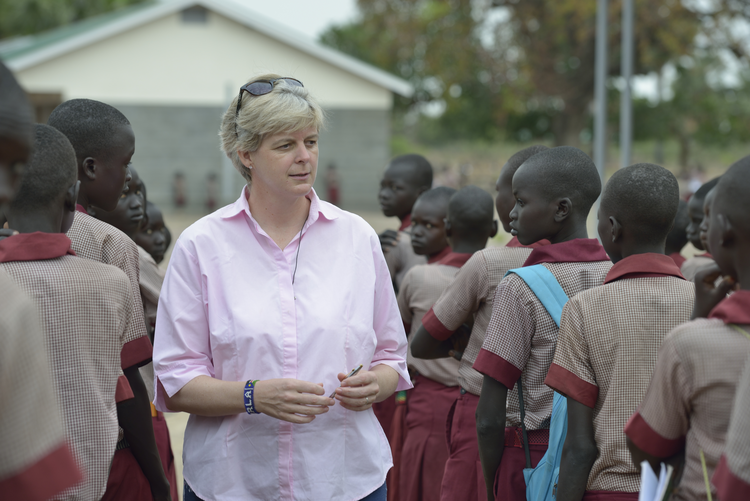 ROME (CNS) -- Church leaders in South Sudan and Congo often wonder if they have labored in vain because, too often, their own people are waging war on each other, said Father Maurice Ibiko, a South Sudanese.

The root of the conflict, he said, is "the wrong answer to the question, 'Who is my neighbor?'"

Hundreds of women and men belonging to dozens of religious orders gathered at Rome's Pontifical Urbanianum University Jan. 18 for a roundtable to share their experiences of living and ministering in South Sudan and Congo.

The event was a follow-up to a papal-led prayer service for peace in the two countries in November. The international unions of superiors general of women's and men's religious orders, Caritas Internationalis and the Vatican Dicastery for Promoting Integral Human Development sponsored both the prayer service and the roundtable.

Callista Gingrich, U.S. ambassador to the Holy See, spoke briefly at the event, pledging the U.S. government's support for peace and the upholding of human rights in the two countries.

One superior general, the head of a men's order, publicly asked why Gingrich was added to the program when "the politics of the U.S. are the cause of the suffering of poor people." His question was met with applause, although organizers did not reply.

For most of the speakers at the event, the church's key contribution to peace must be education, formally in classrooms, but also in being models of how men and women from different nations and ethnic groups can live together in peace and build community.

The church's key contribution to peace must be education, both in classrooms and as examples of diverse people living in harmony.

The two unions of superiors general together run Solidarity with South Sudan, staffing five communities in the country with men and women religious who live, pray and work together to train teachers, nurses, midwives, farmers and pastoral workers.

Father Ibiko spoke in the place of Bishop Eduardo Hiiboro Kussala of Tombura-Yambio, president of the South Sudanese bishops' conference, who did not get an Italian visa in time for the event.

Borrowing from his bishops' prepared remarks, Father Ibiko noted how the majority of South Sudanese people are Christian -- and some 38 percent are Catholic -- yet the violence continues.

Starting from the parishes, he said, the Catholic Church must "be attentive and responsive to the needs of different groups and members of our communities so that everyone feels welcomed, at peace and at home. Once our communities are bound together, there will be no room for divisive policies to infiltrate and to sow seeds of division, hatred and violence."

And because South Sudan's population is predominantly young, he said, education for jobs and for peacemaking must be a priority. "The huge population of uneducated and unemployed young people has become a strategic reservoir," which politicians and warlords tap into for their militias, Father Ibiko said.

In both South Sudan and Congo, women and girls are a priority concern for the Catholic Church's outreach.

Loreto Sister Orla Treacy, principal of the Loreto School in Rumbek, South Sudan, said when she first arrived in the country 11 years ago "it was a country of hope" because a peace agreement had set a path for independence.

"Sadly, it didn't last long," she said. Independence came and so did war and the poverty war brings.

Daniel Ellsberg on the most dangerous threat we face
Peter Steinfels

"There is much injustice, but for me working with young people and girls in particular, the greatest injustice we face each day is that of forced marriage," she said. It is not usual for parents to take their daughters out of school before graduation because they have promised them in marriage.

But with the increased poverty and, therefore, increased reliance on dowries -- in Rumbek, it's usually between 20 and 300 cows, she said -- parents are giving their daughters in marriage at a younger and younger age.

Despite having parents sign an agreement that they will not withdraw their daughters from school to force them to marry, she said, "each year in our school we lose about 2 percent of our girls through forced marriage. It's not too bad when you look at the national average for marriage -- 52 percent of 18 year-old-girls are married while 17 percent are married under 15."

The situation for women is even worse in Congo, which is known as "the rape capital of the world," and where rape as a weapon of war also is used against men and children.

"I believe that consecrated people make a difference" in helping survivors, even if some nongovernmental organizations have staff with more professional training, he told the roundtable.

The religious and diocesan priests, he said, come from or live within the communities, "they are committed for life" and not just assigned for a short-term project, and they are supported by their parishes and religious communities.

The Catholic response, Father Ugeux said, is "compassion, indignation and solidarity," and all three always must be present.

"It is not enough to treat and pray for the victims, we must act in such a way that there are no more victims," he said. While political demonstrations are useful, "the pursuit of abusers and murderers and the end of impunity remain priorities for the church."