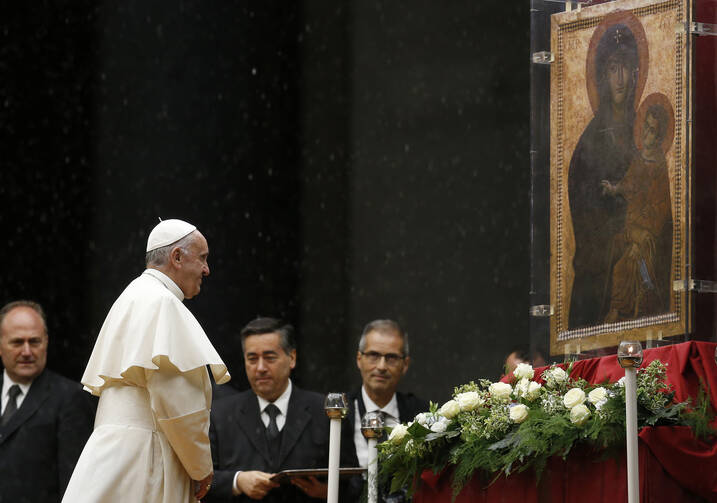 Pope Francis prays in front of the Marian icon "Salus Populi Romani," (health of the Roman people), during a Marian vigil in St. Peter's Square at the Vatican in 2016 (CNS photo/Paul Haring).

Pope Francis' favorite icon of the Madonna in Rome has gotten a face-lift.

The Vatican on Wednesday unveiled photos of the restored Salus populi Romani, the Byzantine-style painting on wood located inside the St. Mary Major Basilica. The icon, revered by Romans, will be displayed to the public Sunday when Francis celebrates a special Mass at the basilica.

Francis famously slipped out of the Vatican the morning after his election as pope to pray before the icon, which features an image of Mary, draped in a blue robe, holding the infant Jesus who in turn is holding a jeweled golden book. Before and after every foreign trip, Francis goes to the basilica to pray before the icon and leaves a bouquet of white roses.

Before and after every trip, Pope Francis prays before the icon and leaves a bouquet of white roses.

The head of the Vatican Museums, Barbara Jatta, said the restoration uncovered the "delicate" colors of the faces of Mary and Jesus, and the brilliance of the child's golden robe and the blue of Mary's tunic.

The restoration also will help scholars date the painting, whose origins are disputed. Tradition has it dating from Jerusalem in the 5th century and purportedly painted by St. Luke himself. In an article in Thursday's Vatican newspaper, L'Osservatore Romano, Jatta said the true date is more likely between the 11th and the 13th century.

In addition to cleaning the image and repairing issues dating from previous restorations, restorers made a new showcase for the icon — lighter and with handles — to allow for easier and safer transport for the various religious celebrations where it's displayed.

History's first Latin American pope is particularly devoted to Marian iconography, and as a bishop and cardinal would come to St. Mary Major to pray before the Salus popoli Romani ("Salvation of the people of Rome") every time he was in town on business. The other Marian icon for which he is known to have particular affection is the "Mary Untier of Knots" painting, which he saw for the first time in a Bavarian church when he was studying in Germany in the 1980s.