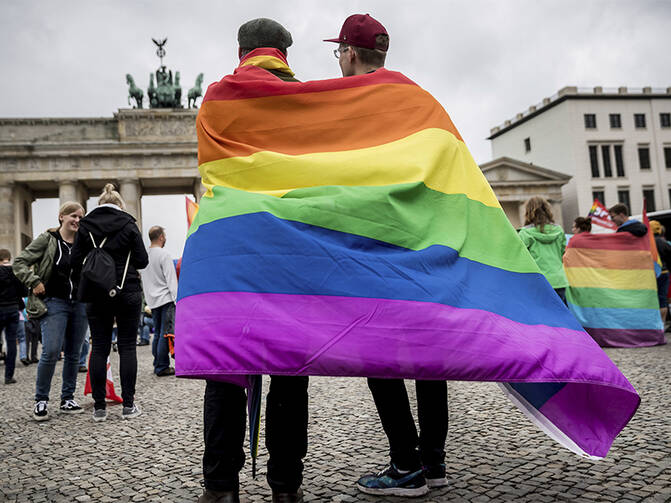 Men with rainbow flags stand in front of the Brandenburg Gate in Berlin at an event organized by the Social Democrats to celebrate the legalization of same-sex marriage in Germany on June 30, 2017. (Michael Kappeler/dpa via AP; caption amended by RNS)

(RNS) — Germany’s unexpected legalization of gay marriage last year has created a pastoral dilemma for the country’s Roman Catholic bishops, who campaigned against the “marriage for all” bill and now have to maintain that doctrinal stand while also showing respect for gay and lesbian parishioners.

Roman Catholicism firmly opposes same-sex marriage as unnatural, so even Germany’s creative theologians have little leeway there. But the theology of giving a blessing to a gay couple is less clear, and two bishops have now spoken out in favor of considering some form of benediction as a way to adjust to the changing times.

The country’s Protestant churches already offer gay couples at least a blessing ceremony, if not a full church marriage, and even the main association for lay Catholics supports allowing blessings. While Pope Francis has ruled out approving gay marriage, he raised expectations of some kind of reform early in his papacy by famously asking “who am I to judge?” about gay people.

“Even though ‘marriage for all’ clearly differs from the church’s understanding of marriage, it is now a political reality,” Bishop Franz-Josef Bode of Osnabrück, the deputy chairman of the German Bishops Conference, said earlier this month.

“We have to ask ourselves how we should deal with people who tie this knot. Some of them are active in the church. So how are we going to accompany them with pastoral care and in the liturgy?” Bode asked. “We could think about giving them a blessing.”

"How are we going to accompany them with pastoral care and in the liturgy? We could think about giving them a blessing."

After Bode spoke in an interview with his local newspaper, it emerged that another prelate, retiring Auxiliary Bishop Dieter Geerlings of Münster, had essentially said the same a month earlier in a lesser-known provincial daily.

“I’m not for ‘marriage for all,’ but if two homosexuals enter a same-sex relationship, if they want to take responsibility for each other, then I can bless this mutual responsibility,” he said.

“This is valuable and praiseworthy, even if this bond is not in complete agreement with the church.”

Roman Catholicism, though it opposes same-sex marriage, preaches respect for individual gays and lesbians. Both bishops made clear that a church blessing would not amount to a church wedding, because marriage in Catholic teaching is a sacrament reserved for a man and a woman.

This suggestion comes after the bishops protested last June when Chancellor Angela Merkel did an abrupt U-turn that allowed nuptial equality to become legal starting on Oct. 1.

Cardinal Reinhard Marx of Munich, who as chairman of the bishops conference is the country’s top Catholic leader, reiterated his opposition to same-sex marriage just before Christmas and has not publicly reacted to his deputy’s comments.

But the issue is not likely to disappear and may come up again soon — when the bishops hold their next half-yearly meeting in the spring.

Legalization of same-sex marriage came as a surprise because Merkel, the daughter of a Lutheran pastor, had long opposed it. But she allowed a parliamentary vote on it under strong pressure from her Social Democratic coalition partners and the opposition parties.

The issue may come up again soon—when the bishops hold their next meeting in the spring.

In the end, Merkel cast her vote against legalization, but it passed with a comfortable majority.

Right after the law was passed, Marx expressed hope that the traditionally Catholic state of Bavaria, where Munich is the capital, would challenge it in Germany’s constitutional court.

The staunchly conservative state government, normally keen to line up with the Catholic Church when it serves its political purposes, commissioned a long legal study but does not seem ready to file a suit.

By contrast, all but one of the 20 regional churches of the Evangelical Church in Germany (EKD), the country’s main Protestant federation, began offering blessings for same-sex couples even before the national law changed.

Five of them allow full church wedding ceremonies and 14 offer blessings, some during a public service and a few only in private.

The church in Württemberg, the region around Stuttgart, is the only holdout. Influenced by a conservative Pietist tradition in Lutheranism, its synod blocked a resolution to allow blessings last November. Reform supporters vowed to keep up their campaign.

About 60 percent of Germans are Christians, with slightly more Catholics than Protestants. Ecumenical cooperation and intermarriage are common, so developments in one denomination are often debated in the other, even if the same change is not made.

Commonly called “homo marriage” because it was not available to heterosexual couples, the law on same-sex civil unions expired in October when gay marriage was made legal.

The Central Committee of German Catholics, an influential association of lay church activists, came out in favor of blessing same-sex couples in 2015. “We must build bridges between church doctrine on marriage and the family and the world that believers are living in today,” it said.

Although most church officials still reject it, the idea of blessing gay couples has been under discussion long before Bode’s interview in the Neue Osnabrücker Zeitung made national headlines.

“I know the issue is out there, not only in Osnabrück or in the (episcopal conference’s) Pastoral Commission, but across Germany,” said Holger Dörnemann, the new delegate for relations with gay people in the Cologne Archdiocese, the largest and richest in the country.

“The discussions in recent years have shown this. (Bode) has only expressed what is actually under discussion in every diocese,” Dörnemann told the archdiocese’s radio station.

“Dogs, cats and motorcycles get blessings, but we’re not worth one?”

We Are Church, a leading lay reform movement, urged the faithful to join in these discussions. “The people in the pews must hold constructive conversations with church leaders in which the bishops are the ones who have something to learn,” it said.

The blessing issue made headlines in September when a bishop barred a priest in Emmerich, near the Dutch border, from giving one in church to the city’s gay mayor and his partner.

“Dogs, cats and motorcycles get blessings, but we’re not worth one?” Mayor Peter Hinze complained. “It can hardly be made clearer that we’re second-class people.”

Several Catholic theologians have chimed in to say blessings are a sign of God’s mercy and should not be refused to believers who do not live up to church teachings completely.

“I think it’s a problem theologically if we make blessings dependent on a moral assessment of human behavior,” Benedikt Kranemann, a professor of liturgy at the University of Erfurt, told the church’s official news site, katholisch.de.

“When a car is blessed, the driver is also blessed, regardless of how he drives,” he said. “The church was authorized to pass on God’s blessing as a promise. The person blessed is supposed to live according to what he was promised.”