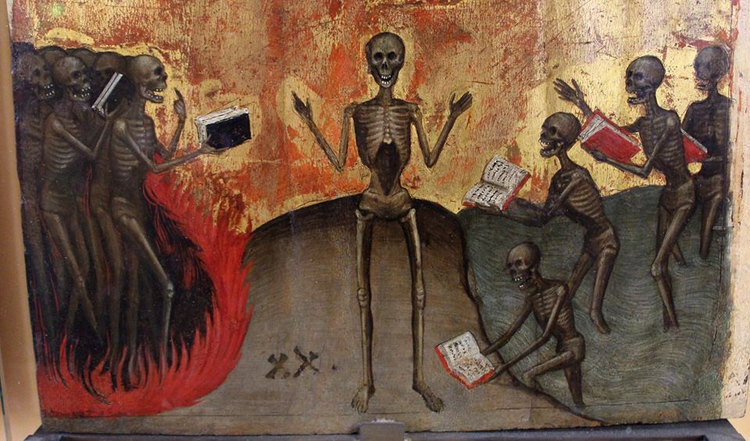 Sometimes when you peer into the past, you see the present. Something that happened a long time ago, in much different circumstances, still occurs today. Of course, that is the purpose of studying history. The world never stops changing, but we humans, in our virtues and vices, hold rather steady.

Reading The Empire at the End of Time, by Frances Courtney Kneupper, I discovered that late medieval German prophecy is a lot like Twitter and Facebook posts. It is stridently one-sided. Ms. Kneupper, an assistant professor of medieval history at the University of Mississippi, examines a number of 15th-century prophecies, which gained wide circulation in German-speaking lands on the eve of the Reformation.

We speak to others, but we do not dialogue with them. We only send words their way.

These prophecies are bitter and violent, predicting the forcible restructuring of the church. They tend to be written in German, rather than in Latin; they side with German, rather than Roman, interests; and they are stridently anti-clerical, predicting savage chastisement. Ms. Kneupper writes, “Prophecies circulating in German-speaking lands seem to have emerged as a medium in which people felt free to sling insults at what they saw as the worst clerical vices.”

Are you doubtful that something so arcane can speak to our current situation? Here is a sample: “Through the German emperor, the clergy will be destroyed by the wrath of God. They will be impoverished for eternity.” That is from the Gamaleon prophecy of 1420. And here is one from around 1460, called the Visio Gigebaldi: “The Roman King and the Imperial cities will permanently abolish the clergy’s power and purify the land of all villains and sorcerers...heathens and their collaborators.... Justice will again appear in the good old way, up to the time of Antichrist.” Around the same time, Dietrich von Zengg prophesied that “the Roman priest will fall from the Roman seat on account of the sins of simony and lechery...and the clergy will gnaw and scratch no more.”

The great temptation in one-way talk is to become strident, but truth does not need to scream or scold.

Were these late medieval seers false prophets? Ms. Kneupper rejects the idea that these prophecies were simply vehicles for propaganda. “They were more like prayers flung to the heavens, wishes so fervent that they manifested themselves as visions of the future.” They are also examples of what might be called “one-way talk.” We speak to others, but we do not dialogue with them. We only send words their way.

Twitter and Facebook also foster one-directional discourse, something of a modern soapbox. Maybe that is why, so often, they become strident, so similar in tone to late medieval prophecy. Goodness, right and intelligence all seem to belong to the one who is speaking. Those targeted are simply evil, wrong or stupid.

If you grow accustomed to speaking at people, it is a small step to begin speaking for God himself.

Open your Facebook feed and look for the pattern. President Trump is the antichrist. No, that’s Obama. Don’t be silly. It’s Hillary. If the seat-of-all-evil shifts a bit, congratulations, you have friends who disagree. Still, the tone stays the same in medieval prophecy and on Twitter and Facebook: Look how wrong, stupid and evil those who disagree with me are.

What is being said on social media today was, no doubt, popped off by a previous generation on their backyard patios and before that on front porches. But now, social media gives everyone a broader platform, making us sound like experts, but, sadly, rather mean ones.

He Speaks With Authority
Michael Simone

Moses told the people that the Lord would raise up a prophet like himself for them. But remember that Moses resisted his call, and every true prophet who followed him did as well. None of them were presumptuous. They were all reluctant to say, “I speak for the Lord.”

The great temptation in one-way talk is to become strident, but truth does not need to scream or scold. It is confident enough to speak plainly and courteously. Even the demons acknowledged the truth of what Jesus spoke, yet we have no record of him shouting, of him being snide.

Here’s a twist at the end. Who wrote all that mean-spirited, anti-clerical prophecy? Ms. Kneupper thinks that most of it came off the desks of clerics, bitter and angry at their fellows. Evidently, if you grow accustomed to speaking at people, and if you are sure that what you say is right, it is a small, almost unnoticed, step to begin speaking for God himself.