Pope Francis is heading to Chile and Peru. Here’s what to look for. 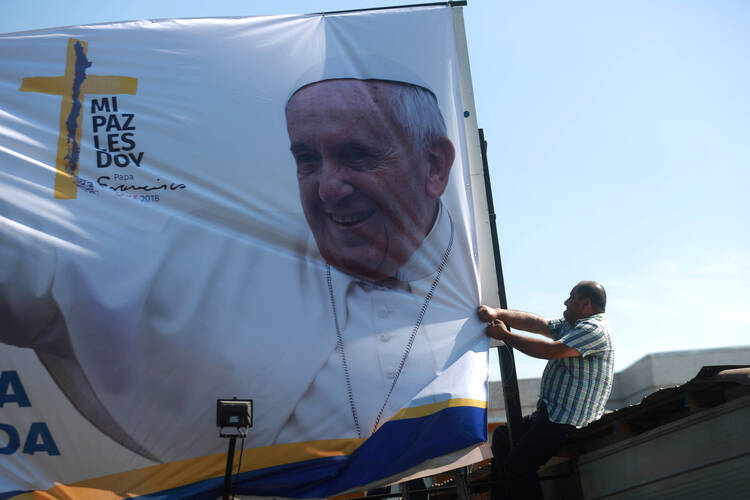 A man arranges a banner with an image of Pope Francis Jan. 11, ahead of the papal visit to Santiago, Chile. (CNS photo/Pablo Sanhueza, Reuters)

Pope Francis will set out on his 22nd foreign trip on Jan. 15, a visit to Chile and Peru that offers a number of daunting issues for him to address—from the plight of indigenous peoples, the condition of migrants; the urgent need to address poverty, inequality and corruption and the state of the environment to the question of the sexual abuse of minors by priests in Chile and lay leaders in Peru.

It will be Francis’ sixth journey to Latin America since becoming pope. He visited Brazil for World Youth Day (2013), Ecuador, Bolivia and Paraguay (2015), Cuba (2015), Mexico (2016) and Colombia (2017). He has yet to visit his native Argentina but will fly over it on route to Chile, and since it is the common practice that the pope sends a message to the head of the state that he is passing over, there is much interest in what he will say.

He will arrive in Chile on the evening of Jan. 15, after a 16-hour flight from Rome. He will spend the first day, Jan. 16, in Santiago, the capital city with a population of five million people.

Pope Francis will set out on his 22nd foreign trip on Jan. 15.

In the morning, he will pay a courtesy visit to the president, Michelle Bachelet, at the Moneda Palace and deliver a major address to the civic authorities and diplomatic corps, in which he is likely to comment on the model of development and economic growth of which Chileans are proud, even though it has also produced great inequalities. Ever attentive to those discarded by the economic system, Francis is likely to put his hand in this wound and underline the need for solidarity. He might also refer to the recent laws passed under President Bachelet legalizing same-sex marriage and abortion.

That afternoon Francis will visit a women’s prison; address priests, religious and seminarians in the cathedral; and speak to the bishops before celebrating Mass in O’Higgins Park, just as St. John Paul II did when he came to Chile in 1987. Thousands of Argentinians are expected to attend the Mass. Francis is likely to recall the great figures and elements of the Chilean church in the past century: St. Alberto Hurtado, S.J., Cardinal Raul Silva Henriquez and the Vicaria de Solidaridad, a church group famous because of its defense of human rights and assistance to victims of Mr. Pinochet’s repression.

Ever attentive to those discarded by the economic system, Francis is likely to underline the need for solidarity.

That evening, he will visit the sanctuary of the Jesuit saint Alberto Hurtado and have a private meeting with the 90 Jesuits who work in this country where the share of Catholics has decreased from 80 to 60 percent since 1987. Thirteen million of Chile’s 18 million people profess to be Catholic today. It remains to be seen if Francis will meet with the victims of sexual abuse by clergy; the meeting is not on the program but it cannot be excluded given recent appeals for his intervention on this issue.

On Jan. 17, Francis will fly to Temuco, 416 miles south of Santiago, in heart of Araucania, the land of the Mapuche. This indigenous people, who defeated the Incas and blocked the Spanish conquistadors, suffered injustice and loss of their ancestral lands at the hands of the new Chilean republic; they are now demanding their rights and their lands, and Pope Francis is expected to support them in some way. He will not endorse the use of violence to reach this goal of course. He might even draw attention to the fact that Chileans today are “a nation of mestizos,” as Fernando Montes, S.J., former rector of the Universidad Alberto Urtado, told America, referring to the fact that 80 percent of its 18 million people are of combined Spanish and Amerindian descent.

On Jan. 18, Francis will take the plane from Santiago to Iquique in the north, one of the largest duty-free ports in South America. The city has attracted migrants from all over Latin America. Indeed, Chile today has welcomed more immigrants than most other countries on the continent; they come from Bolivia, Colombia, Haiti, Peru and more recently Venezuela. Francis is likely to address the question of migrants here. He will also meet victims who suffered under the military dictatorship of General Augusto Pinochet.

From Iquique, the pope will take a two-hour flight north to Lima, the capital of Peru, a country where the Catholic faith is very much alive—28 million of its 31 million inhabitants are Catholic.

Next morning, Jan. 19, he will fly to Puerto Maldonado, a city in south-eastern Peru, in the Madre de Dios Region, in the Amazon rainforest that is sometimes referred to as one of the two lungs of planet earth. Thirty-four million people live in the Pan-Amazon region that includes eight other countries, including more than 350 indigenous groups, but already 17 percent of the Amazon jungle has been destroyed, putting the health of the planet at risk.

17 percent of the Amazon jungle has been destroyed, putting the health of the planet at risk.

Pope Francis has spoken about this in his encyclical “Laudato Si’,” and in October 2017 he announced that a Special Assembly of the Synod of Bishops for the Pan-Amazonian region will be held in Rome in October 2019. His visit is being considered as the opening act of that synod, and his speech is expected to be one of great importance. Here, too, he will meet and address the indigenous peoples of the Amazon and have lunch with a small group of them.

Later that day he will return to Lima and address the political and civil authorities and the diplomatic corps in the government palace. His visit to Peru was originally considered the easier part of the week-long trip, but now the political climate in Peru is in turmoil.

President Pedro Pablo Kuczynskinarrowly managed to avoid impeachment for corruption thanks to support from the son of the former president Alberto Fujimori, then in prison because of corruption and human rights violations. He then granted pardon to his predecessor Fujimori, sparking outrage among many people who suffered under his regime, some of whom want to meet the pope.

The pope’s visit to Peru was originally considered the easier part of the week-long trip, but now the political climate in Peru is in turmoil.

Pope Francis is expected to address the problem of corruption during his trip, but he may wait to do so until the next day when he goes to the coastal city of Trujillo in northwest Peru, which is considered the “cradle of liberty and cradle of the judiciary in Peru.” He decided to come here to express his closeness to the city’s inhabitants who suffered during the severe flooding caused by El Nino in March 2017. Before returning to Lima that afternoon, he will give a talk to priests, women and men religious and seminarians.

‘The next bombs will be in your cassock.’ Chile churches firebombed days before Pope Francis’ visit
Associated Press

Pope Francis will spend Jan. 21 in Lima, the capital city with 10 million inhabitants, which was founded by the Spanish conquistador, Francisco Pizzaro, on Jan. 18, 1535. Known as “the city of the saints” because all five of “the great saints of the first evangelization” lived in Lima and were renowned for their dedication to the poor and their deep spirituality.

Francis is sure to refer to these saints on this, his last day in Peru, as he seeks to confirm the faith of the people during his visit the Sanctuary of the Lord of the Miracles (El Santuario del Señor de Los Milagros), in his address to the bishops and at the open-air Mass he will celebrate before taking the plane back to Rome. He will give a press conference on the flight home—and will have traveled 42 hours by plane by the time arrives back in Rome on Monday afternoon, Jan. 22.