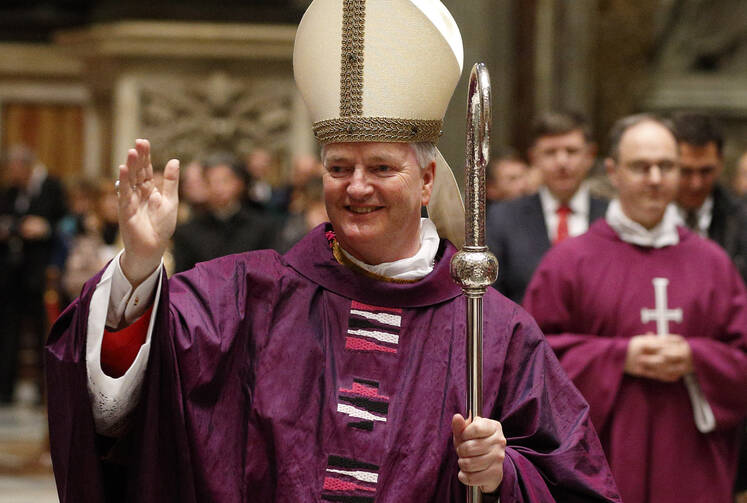 Newly ordained Bishop Paul Tighe, a priest of the Archdiocese of Dublin, greets the faithful during his ordination to the episcopate in St. Peter's Basilica at the Vatican Feb. 27, 2016 (CNS photo/Paul Haring).

John Allen recently called you “the Vatican’s nicest guy.” How did you get that reputation?

My mother’s reaction was quite good: “Well, if you’re the nicest, I wouldn’t like to meet the nastiest.”

Yeah, no. I suppose when I arrived at the Vatican one of the things that I hadn’t realized was how small a reality it is, the Holy See as an administrative reality. When we were studying theology we read the documents produced by the Pontifical Council for Justice and Peace, documents on economic justice and things like that. Then you arrive here and realize it’s only about 10 or 15 people.

Bishop Paul Tighe, the secretary of the Vatican’s Pontifical Council for Culture, has been called “the Vatican's nicest guy.”

But that actually became a strength, because we immediately looked on digital as the future. We might not have known anything about it, but neither did anyone else. So we weren’t particularly disadvantaged.

We also began to realize that the way in which people’s social networks function have been radically transformed by social media. So for churches it’s not just about how we communicate to these people, but how are you going to get present in the environs in which they are living their lives?

Then on the other hand you began to realize that digital communications was affecting how people debate politics. Unfortunately, technology that seems to be wired to bring us closer together, to help us to appreciate better unity of the human family because it makes our world smaller, actually ultimately serves at times perhaps to radicalize existing differences.

Why is the church engaged in social media in the first place?

Although we live in different environments, most of us, if we were to step back and look at our own faith journey, we’d find connections.

I grew up in a small parish, which was linked to a diocese, which linked me to a universal church, so I had a normal, institutional feeling for church. At the same time, I attended a school that was run by the Loretto Sisters, who were people who had sent Mother Teresa to India, so therefore from a very early age I was hearing stories of India.

So, for all sorts of ways, I think social media was something of a natural fit for the church.

Pope Benedict basically said, “Are you saying this is something that will allow me to reach people I wouldn’t otherwise reach with short messages of hope, and it’s not going to demand a lot of work from me?” “Yes.” “Go with it. I don’t need any further explanation.”

At this stage now Pope Francis, who inherited that Twitter account, has built up something over 40 million followers across the different language platforms. That’s important in itself, but more important is that we’re told by Twitter that we have a very high reach range, so that the messages of the pope are reaching out to people who don’t follow him.

Why does Pope Francis communicate so well in our digital culture?

It is extraordinarily fortunate, and it’s not just fortunate, I think it’s providential, that we have a pope whose communication style is very direct and very simple. Very short video clips capture something of the essence of the spontaneity, the good humor, the smile, the simplicity, the generosity. We’re just very blessed in this moment we have somebody who is rather visual in his style of communications. But, I think he would be very disappointed if it didn’t get beyond him to where he’s trying to point people, which is to the Gospel itself.

I think it’s providential that we have a pope whose communication style is very direct and very simple.

So, one of the things that becomes very clear is that what people see is what they get. I think it’s a reminder for us all to recover a certain authenticity in terms of digital media, that we’re seen to be people who have a concern for the other.

Most people in social media may be trying to sell you something or convert you to a cause. We have to be there with a certain gratuity. We’re there as good neighbors. We’re there to listen. We’re there to spend time with people, and if appropriate we also want to share the grounds of our own faith with people, but not as a type of bombarding or trying to, but actually authentically to say, “Well look, the reason I can draw hope is because I have this privileged sense of being loved by God.”

What is the role of the laity in social media?

When I look at the social media engagement of Catholics, particularly in the English-speaking world, there is a risk is that we focus on our own internal debates.

I can understand strong convictions, and being Irish I can perfectly understand the desire for a good battle occasionally. But at the same time let’s say you came across this and you weren’t a believer. Is it something that you would find immediately life enhancing? Would you say, “Oh, I really would want to join that group”?

So, I think the other thing that we need to think more about is how, without being glib about it or superficial about it, do we find a way to offer witness to our faith that would be life-giving and supportive to other people.

In our part of the world it’s not quite cool to be too overt about the faith. But I think that the challenge for us, even then, is to somehow find a way of responding to things that shows a certain sort of tolerance and a certain understanding that people might ask, “Well, what’s the source of your hope?”

What we want to come across is a desire to support people rather than necessarily a desire to somehow sign them up for our cause.

What spiritual practices should Catholics engage in to keep our social media presences loving and hopeful?

The first thing is to engage with the platforms of the media that work for you. Not everybody has to be a content-maker, but a very useful job can be just if you’re good at spotting good, helpful materials and sharing that around without having to make it yourself. Some people can be good on Twitter, and other people can realize that Twitter brings out the worst in them.

On the more spiritual side, I think it’s about being self-reflective and conscious of social media. Somehow not allowing yourself to be brought down to the level of a bad conversation.

I want to encourage lay people and Catholics generally to stay involved in social media. You could say it’s a negative environment, there’s a lot of nasty comment, a lot of rough dealings with people. But then we’d abandon that field and let the trolls have it.

What role does social media play in your faith life? America readers weigh in.
Our readers

The key is how can we be there without fully sharing the culture. Sometimes people blame the culture of social media, saying things like, “Twitter made me do it. That’s not really who I am.”

But you have to say no. The culture of social media is itself generated by what individuals do, and we have to work together and encourage one another to be supportive of a better form of communication.

If somebody is looking at what I’m saying and things I’m engaged in, and the tool with which I engage with things, do they see somebody who’s shown signs of having been redeemed by the love of Christ, or somebody who seems rather antsy and cranky rather than blessed?