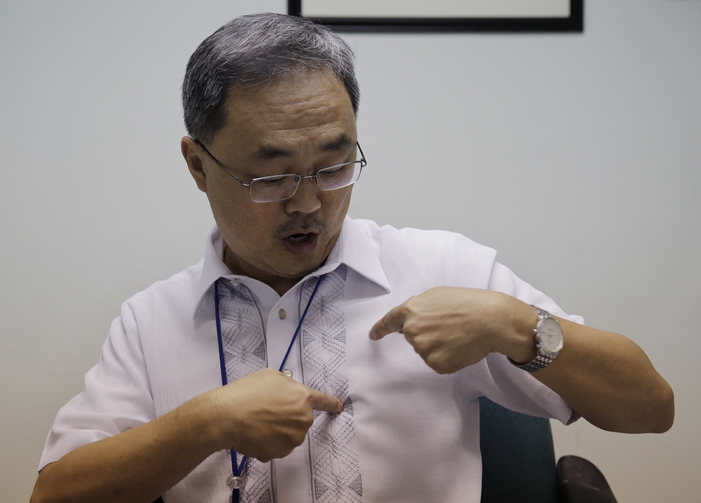 State Prosecutor Senior Assistant Peter Ong points to his chest to show where bullets hit the Italian Catholic missionary Rev. Fausto Tentorio during an interview at the Department of Justice in Manila, Philippines, Friday, Nov. 10, 2017. Ong said the Philippine government militiamen gunned down Tentorio in a 2011 attack, which state prosecutors say may have been carried out with the knowledge of two army commanders in the country's south. (AP Photo/Aaron Favila)

MANILA, Philippines (AP) — Philippine government militiamen gunned down an Italian Catholic missionary in a 2011 attack which prosecutors say may have been carried out with the knowledge of two army commanders in the country's south, a justice official said Friday.

A Justice Department panel led by Senior Assistant State Prosecutor Peter Ong recommended murder complaints be filed against a dozen suspects, including the militiamen and two army commanders, for the October 2011 killing of the Rev. Fausto Tentorio, a popular anti-mining advocate in Arakan town in North Cotabato province.

The investigation report, a copy of which was obtained by The Associated Press, overturns an earlier finding by authorities that blamed two civilians for the killing, which was condemned by the Italian government and environmental activists.

"He was perceived to be a sympathizer of the NPA," Ong said of Tentorio, referring to the rebel New People's Army, which has been waging a decades-long communist insurgency in the Philippines. "But that's not a reason for him to be killed."

"He was perceived to be a sympathizer of the NPA, but that's not a reason for him to be killed."

Military spokesman Maj. Gen. Restituto Padilla said the military has not received a copy of the findings but stressed that it does not condone such killings or any illegal action by combat forces. He said troops have shown their professionalism, including in the enforcement of martial law in the south.

"We appeal to the public not to judge our personnel until they're proven guilty beyond reasonable doubt," Padilla said.

"We must never let the greed of big businesses win over the constitutional rights of the people to a healthy and balanced ecology as well as the ability to defend that right," said Vince Cinches of the environmental group.

Tentorio, who led a campaign against mining operations which environmental activists feared could displace impoverished villagers and tribal communities, was shot several times with a pistol as he walked to his car in a church compound in Arakan, officials said.

Tentorio was shot several times with a pistol as he walked to his car in a church compound.

Hundreds of Arakan residents and environmental activists attended his burial.

The investigation cited several witnesses, including students and teachers attending a morning flag ceremony at a nearby school, who heard gunshots and later saw the suspected gunman walking away from the church compound, where Tentorio was found sprawled beside his car. The gunman fled with companions on two motorcycles.

A key witness, Danilo Bayawan, was cited in the investigation as saying that he attended a meeting called by Jan Corbala, a local leader of a militia force, who discussed the planned killing of Tentorio about a week before the attack. Corbala allegedly stated that he was ordered by military officials to kill Tentorio and was given money and a motorcycle to carry out the attack, the report said, adding that Bayawan backed out of the plot and later decided to tell authorities what he knew.

The killing reflected the danger foreign and local Catholic missionaries face in the volatile south, where other priests have been killed, kidnapped and wounded in attacks, including by Muslim militant groups.