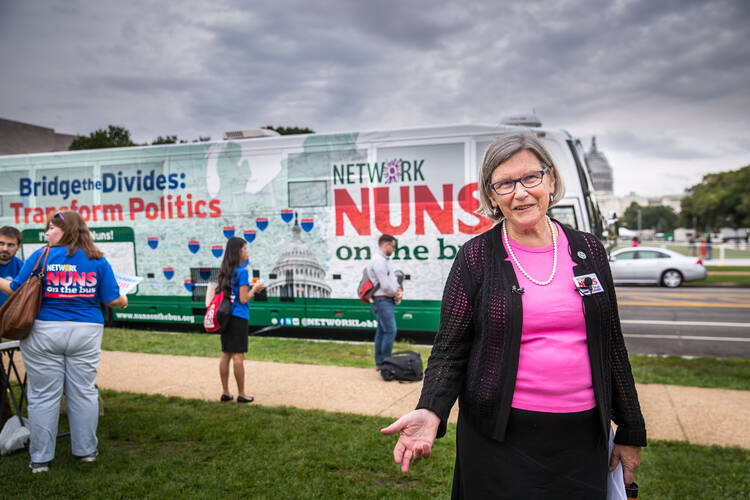 This week, we talk with celebrity nun, Sister Simone Campbell. Sister Simone is the leader of the Nuns on the Bus and executive director of the NETWORK Lobby for Catholic Social Justice. We talk balancing spirituality with fame, women religious, Catholic feminism, Paul Ryan and more.

In Signs of the Times, next week is Halloween, and some women religious warn: sexy nun costumes aren’t funny. Half of U.S. citizens don’t think you need to believe in God to be a good person—what exactly does it mean to be good? Have you heard of the Palmarian Catholic Church? Well, Dan Brown, author of The Da Vinci Code and infamous for getting Catholicism wrong, has a new book out focusing on the creepy, Catholic sect (as a bonus, you guys get to hear about Zac’s schismatic church rabbit hole). Earlier this year, the Vatican released a survey in anticipation of next year’s Synod 2018 on Young People, the Faith, and Vocational Discernment. The three of us took the survey back in July on episode 20. Since then, the survey now has over 60,000 responses.

And finally, earlier this year, Bill O’Reilly was fired from Fox News after several women came forward and accused him of sexual harassment. This week, O’Reilly, who is Catholic, claims that he is “mad at God” over the way he has been treated. This comes in light of similar allegations against Harvey Weinstein, James Toback and Terry Richardson. We talk about the right way for men to talk about sexual harassment and assault, toxic masculinity, the power of the #MeToo social media movement and more. (Editor's note: In the episode we say that Alyssa Milano started the #MeToo campaign, but she actually just reignited it—Tarana Burke is the founder of the movement.)

As always, we love to hear from our listeners. Make sure to follow us on Twitter, @jesuiticalshow or send us an email at jesuitical@americamedia.org. And please make sure to subscribe—and tell everyone you know to do it also—to us on iTunes. While you’re there, please leave us a review, and we’ll make sure to shout you out during one of our episodes.

P.S., we’re moving this week, so there won’t be a new jesuitical dropping next week. However, we’re back the second week of November with Tommy Tighe, author of The Catholic Hipster Handbook: Rediscovering Cool Saints, Forgotten Prayers, and Other Weird but Sacred Stuff.

Why your ‘sexy nun’ costume isn’t funny
Half of U.S. Catholics say belief in God is not necessary to be a good person
Dan Brown’s new target? The creepy Catholic sect with its very own pope and ‘Vatican’
Bill O'Reilly ‘mad at God’ over sexual misconduct allegations
Pre-Synod Survey has 65,000 responses (L’Osservatore Romano)
Can the Catholic Church keep millennials from passing it by?
I’m a Jesuit. How should I respond to toxic masculinity and #MeToo?

Since we’re moving, we drank whatever we had left in our fridge: Sierra Nevada Oktoberfest