The Museum of the Bible is ultimately a leap of faith 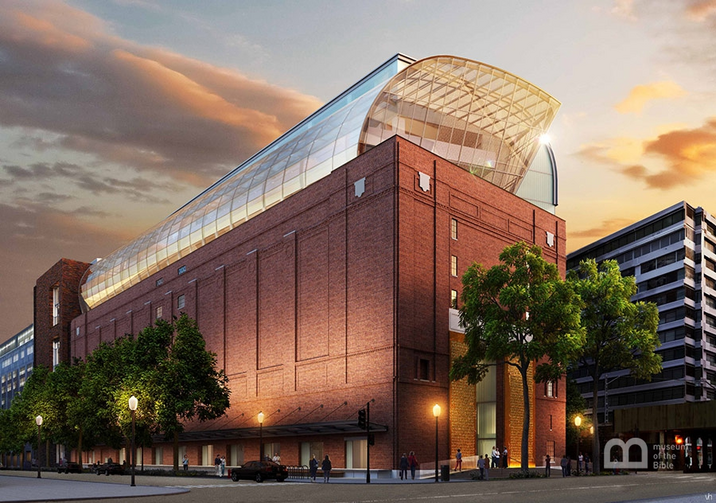 In the beginning, it was just a mostly abandoned warehouse just two blocks south of the U.S. Capitol. Over the last five years, its 430,000 square feet have been transformed into a six-story state-of-the-art museum—please pardon the cheap pun—of biblical proportions. The new Museum of the Bible, which opens on Nov. 17, will be the largest privately financed museum in Washington, D.C., with a collection and projected attendance that could rival those of its Smithsonian neighbors.

“We have no agenda,” the museum’s president, Cary Summers, told me during a recent tour of the new facility, “other than to help our visitors to appreciate the role that this unique book has played in the history of Western civilization and in the history of the United States.” In one sense, most Americans know that already. Eighty-four percent of Americans own at least one Bible and there are 2.2 bibles for every American household. In fact, there are more Bibles in circulation today than at any time in the history of the world. Yet there is also more ignorance about the Bible than ever before, says Mr. Summers. “The goal of the museum is to help visitors to appreciate how these texts touch almost every aspect of our lives.” Yet the mission, he says, is to inform and inspire, not proselytize.

It is hard to imagine, however, how this place could not inspire visitors to investigate further the faiths that created this book. It’s a very impressive undertaking. The second, third and fourth floors are devoted to the impact of the Bible, the narratives of the Bible and the history of the Bible, respectively. Each exhibit is presented in a dazzling display of technology and scholarship, all designed to appeal to both the most and least informed among us. On the first floor, there is approximately 13,000 square feet reserved for temporary exhibitions, including what will be the largest-ever exhibition organized by the Vatican Museum outside of Rome.

Each exhibit is presented in a dazzling display of technology and scholarship, all designed to appeal to both the most and least informed among us.

What’s also clear is that the museum has the potential not only to educate and inform, but also to inspire a revolution in how visitors experience museums. Mr. Summers and his team have invested a substantial sum in developing new technologies to enhance the visitor experience. Every visitor will receive a handheld personal device, for which the museum owns the patent and trademark, that will tailor a tour of the museum to the individual’s tastes and interests: You tell the device how much time you have to visit and what topics you are interested in; the device then instantly devises an itinerary for your stay, tracking your position by GPS to a point within four inches of where you are standing. It is like having a personal guide for every single visitor. And all that will be available free. The museum will not charge admission, though it will ask for a voluntary donation.

No undertaking of this size and scope, of course, is uncontroversial. The initial funding for the project was provided by the Green family, the owners of Hobby Lobby, who were recently embroiled in a controversy about archeological artifacts that were illegally (and unknowingly, according to the family) obtained from Iraq. Mr. Summers is keen to point out that none of the artifacts in question are included in the Green Collection at the museum, which itself constitutes only a small percentage of the items in the museum’s possession. He also notes that while the museum is grateful for the Greens’ leadership gift, the museum is a distinct and independent entity, funded by donations from more than 55,000 people and institutions.

The museum has also received some criticism from academics who feel that the museum has been insufficiently scholarly in its approach. Yet it is hard to see how that is the case. Mr. Summers and his team have assembled more than 100 biblical, archeological and cultural scholars, who are working full time to tell the story of this book. It is an ecumenical and interreligious effort. One-third of the scholars are Protestant, says Mr. Summers, one-third are Catholic and one-third are Jewish. They include some of the most accomplished biblical scholars in the world, some of whom have written for America.

According to Mr. Summers, that unprecedented ecumenical and interreligious cooperation is the museum’s greatest accomplishment. “We have learned here that the major traditions that share the bible can, in fact, work together,” he says. So even before the doors officially open next month, the place has made a difference. But when those doors open, how many will walk through them? While he has what he thinks are reliable predictions, “there’s more to measuring our success than the numbers,” Mr. Summers says. In other words, in the end, it’s a leap of faith.