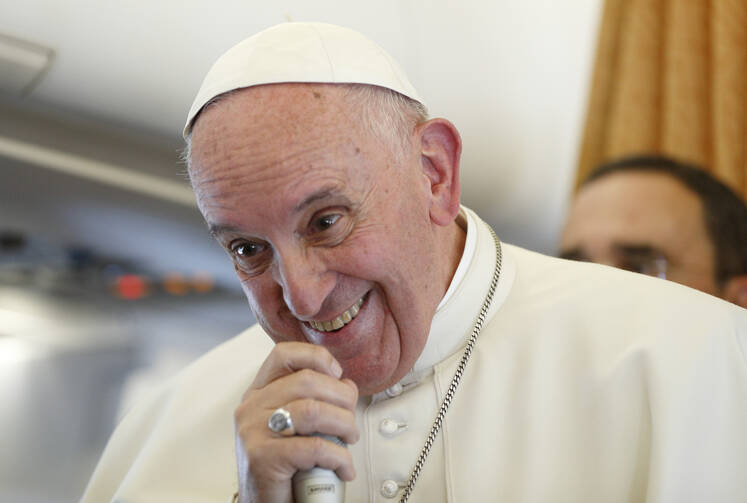 That is what Pope Francis stated in his introduction to a new book, released in Italy this week, that contains several interviews he has given since becoming pope in March 2013. Now ask me your questions (in Italian: Adesso fate le vostre domande) is the title of the 235-page book that will be presented in Rome on Oct. 21 by Antonio Spadaro, S.J., the editor of this volume and editor in chief of the influential Jesuit biweekly review, La Civiltà Cattolica. The title comes from what Pope Francis always says to journalists at the beginning of press conferences on the plane returning from visits to foreign countries.

Pope Francis: “I desire a church that knows how to insert itself into the conversations of people.”

The book, currently only in Italian, contains eight interviews. Six of them are with Jesuits, including Father Spadaro’s groundbreaking interview in the summer of 2013 and Father Spadaro’s second one for the 1,000-page publication of the homilies and talks that he gave as archbishop in Buenos Aires. The four other interviews with Jesuits are: an unpublished conversation with the Jesuit communities in the Philippines (January 2015); in Poland during World Youth Day (2016); and another with the Swedish Jesuit, Father Ulf Jonsson, editor of a Jesuit cultural review in that country, about Luther and the Lutherans.

The latter (October 2016) was given on the eve of the pope’s visit to Sweden for the commemoration of the 500th anniversary of the Protestant Reformation. Then there is the pope’s conversation at the General Congregation of the Jesuits after the election of the new superior general, Father Arturo Sosa (October 2016).

Two of the interviews are with the Union of Superiors Generals of men’s religious orders in Rome. These are spontaneous, sincere conversations, with questions and answers, that were never intended to be made public.

Pope Francis confessed that while he has “chutzpah,” “I am also timid.”

In his introduction to this volume of interviews, Pope Francis confessed that while he has “chutzpah” (“faccia” tosta, in Italian), “I am also timid.” He recalled that as archbishop of Buenos Aires he was at first “a little frightened” of journalists because he feared they could give “bad interpretations” to what he said.

His attitude changed, however, after the good experience with Francesca Ambrogetti and Sergio Rubin for the interview book El Jesuita and similar experiences in interviews with Marcelo Figueroa and Rabbi Abraham Skorka. He now feels more relaxed with reporters, and “while I must not lose prudence, I must also not lose trust [in people].” Nevertheless, he confided, “I always pray to the Holy Spirit before hearing the questions and responding.”

Pope Francis said he has come to see interviews as an integral part of his “pastoral ministry.” Interviews “always have a pastoral value for me, in one way or another. It’s a way of communication of my ministry. I link these conversations in the interviews with the daily form of the homilies at [the Mass] at Santa Marta,” he added. He said he likes especially, to give interviews to small, popular papers or magazines because in those “I hear the concerns and the questions of the common people.”

Pope Francis said he has come to see interviews as an integral part of his “pastoral ministry.”

In new book, Pope Francis says he consulted a psychoanalyst, speaks about the women in his life
Gerard O’Connell

Several of the interviews in this volume were originally meant to remain as private conversations. “They were very free, spontaneous encounters in which the pope spoke frankly and from the heart,” Father Spadaro told America. He was present at all of them and originally recorded them for his own personal use. But on re-listening to them, he said he noted that “a vision of church and a vision of the world” kept reappearing in each of them, and he felt it would be good to gather them all together and make this “rich vision” available to a wider audience.

He requested the pope’s authorization to publish them in one volume, and after re-reading them carefully and making some “minor corrections,” Pope Francis gave his consent and agreed to write the introduction.

Pope Francis: “I desire a church that knows how to insert itself into the conversations of people.” https://www.americamagazine.org/faith/2017/10/17/pope-francis-speaks-candidly-church-new-book-interviews via @americamag
The Pope has the opposite of what he claims to "desire"; and he does not realize it. Instead of that, the one true Church has allowed a new doctrine invented by people rather than by God, to be inserted into the Church. These fallen-away people, and unfortunately the fallen-away clergy and bishops, have interjected a new "tradition" into the Church in order to affect change while rejecting the gospels and God himself!

To be fair, the Pope inherited a lot of this from previous generations. However, he is encouraging more of the same through what he says and writes and even does, right down to his appointments to Vatican positions and his greater willingness to speak with modernists than those who seek to uphold Catholic tradition. The change demanded by this modernist culture more closely resembles false Protestant theology.

Prior to Luther, "new traditions" never gained much traction. However, Luther and his followers and now, even so-called Catholic priests and bishops have set themselves up as God--no longer subject to God's laws and no longer faithful the one true Institution founded by Christ to help believers avoid the snares of the devil. They falsely believe that they know better than two thousand years of Catholic Tradition. If they are the least bit inspired in any way, they are most inspired by the evil deceiver.

So what more could be expected of these faux leaders? They have no moral high ground and no true moral compass because, by all credible news and now even their own personal testimony, they have violated their priestly vows of chastity, and seem more willing to continue in sin than to repentant. They are now left with a sad predicament. They cannot ask Christians to do what they themselves have not done and are unwilling to do. Furthermore, they refuse to change.

Will these people see God? Do they even care? Do they even believe in God? Each one will answer to God. Gods' mercy depends upon forgiveness, and His forgiveness depends upon individual repentance. Without repentance, there will be no mercy for those who continue to sin and especially for those who continue to lead the little ones astray. These false leaders will one day wish that they could be cast into the sea with a giant millstone tied around their necks rather than face the reality of eternal damnation.

Have I missed something from my education?. Do these leaders have some unwritten knowledge of philosophy and theology that was not shared with me in all those courses that I took in Jesuit institutions? I thought that we studied our share of heretics and illogical philosophers.. Did my professors allow me to unpack and debunk the false beliefs and teachings while allowing other students to embrace error? Are we to believe that truth has become relative? Of course not! There are objective truths; and truth reveals itself to those who earnestly seek it.

Unfortunately, sometimes people who find truth abandon it because it's more alluring to fall into sin and remain in it. I did that as a teenager and young man, so I get it. But, at the same time, I didn't try to drag multitudes of people to hell with me The thing that is baffling is how one can pretend to be a shepherd when one is in reality a wolf or assistant of the devil who preys upon the sheep. This is a deep infection that plagues the Church from within. Although the hypocrites ought to admit their sin and quit it (either the sin or the Church), Pope Francis seems content to let the infection spread.

Humble my foot. Were Francis not such an arrogant insulting narcissist, he might perform some actual study of the Catholic religion and give a moment's thought to the murderous damage through abortion that he indirectly supports by condoning frivoulous attitudes towards what really constitutes the family. He might actually consider why the rate of persued abortion is seventy times higher among his praised shack-up couples than those in stable first marriages.