How does Pope Francis write his homilies? No surprise, he starts with listening. 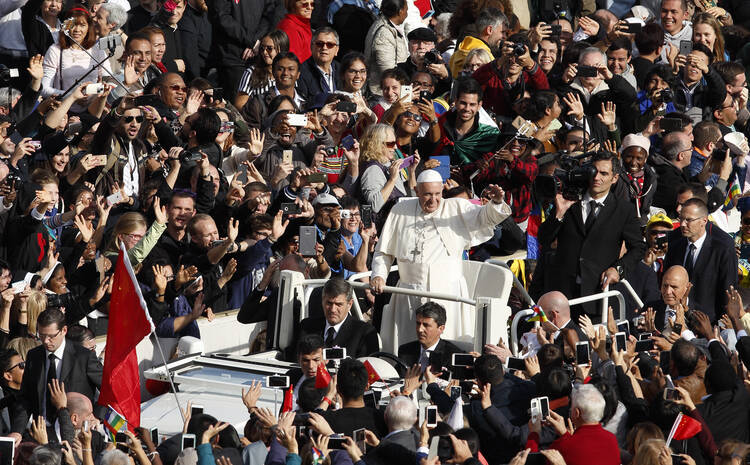 Pope Francis responded to several questions in the fascinating conversation with Antonio Spadaro, S.J., that introduces the new 1,000-page book Nei Tuoi Occhi È La Mia Parola, comprising his principal homilies and talks as archbishop of Buenos Aires. Two relate to the liturgy: how he prepares his homily, and why he says it is “an error” to speak of “the reform of the reform” of the liturgy. I will focus on the first here and the second next week.

In his programmatic document “The Joy of the Gospel,” Francis devotes several pages to the homily. Describing it as an “important ministry,” he labels it as “the touchstone for judging a pastor’s closeness and ability to communicate to his people.” The faithful “attach great importance to it,” he writes, but “both they and their ordained ministers suffer because of homilies: the laity from having to listen to them and the clergy from having to preach them!” (No. 135).

Referring to this “sad” situation and speaking from decades of experience, Francis affirms that “the homily can actually be an intense and happy experience of the Spirit, a consoling encounter with God’s word, a constant source of renewal and growth.” It can “set hearts on fire,” as Jesus did when he spoke with the disheartened disciples who were leaving Jerusalem for Emmaus after the events of Good Friday and Easter morning.

As pope, Francis has shown how this can happen with his morning homilies, which he delivers without reading from a prepared text. And for the first time in history, all these closely watched homilies are recorded by Vatican Radio, frequently reported by the media and now made available in book form.

“What is the secret?” Father Spadaro asked the pope. Francis revealed his method: “I begin at midday, the day before. I read the Scripture texts of the following day, and I choose one of the two. I then read aloud the text I have chosen. I need to hear the sound, to listen to the words. And then I underline, in the notebook that I use, the words that struck me most. I circle the words that hit me. During the rest of the day, as I do what I have to do, the words and thoughts come and go. I meditate, reflect, savor the things….”

He admitted that “there are days when I reach the evening and nothing has come to mind, and I have no idea what I will say the following day.” On such occasions, he said, “I do what St. Ignatius said: I sleep on it. And then, suddenly, when I wake up, the inspiration comes. The right things come, sometimes strong, other times weaker. But it is this way, and I feel ready.”

Francis emphasized, however, that besides creativity there are two other essential elements that help a priest prepare his homily. First, “listen to the lives of people. If you do not listen to people, how can you preach?” he asked. “The closer you are to people, the better you will preach or bring the word of God nearer their lives. In this way, you link the word of God to a human experience that has need of this word.” But, he remarked, ”The more distant you are from people and their problems, the more you will take refuge in a theology that is framed as ‘You must,’ and ‘You must not,’ which communicates nothing, which is empty, abstract, lost in nothing, in thoughts. At such times we respond with our words to questions that nobody is asking.”

He recalled that Jesus was “in contact with people” when he spoke; his homilies “are direct, concrete: he spoke of things that the farmers and the shepherds knew well from experience. He did not use abstract concepts.”

Francis identified a second essential element: “To preach to people it is necessary to look at them, to know how to look and how to listen, to enter into the ebb and flow of their lives, to immerse oneself in them,” to be “in contact with them, touch them, caress them” or “in silence look into their eyes.”

He is against reading the homily from a prepared text “because if you are reading, you are not looking into the eyes of people.” He considers it important “to look into the eyes” of the people to whom one is preaching, or at least into the eyes of one person.

With these hints, Francis has shared his secret to good preaching.