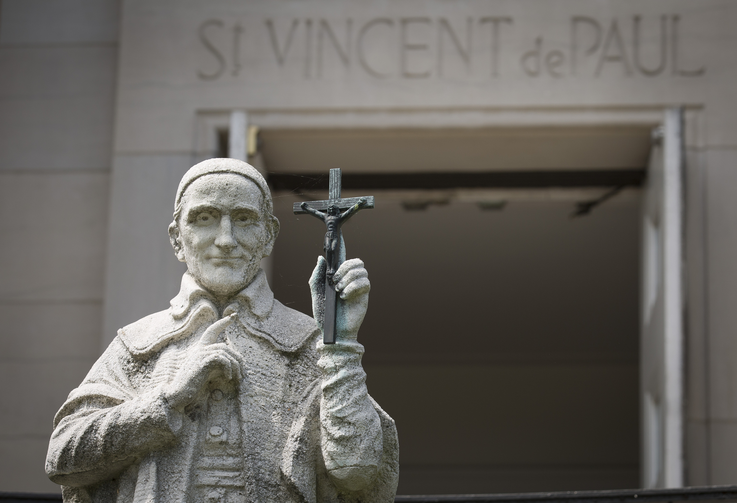 A statue of St. Vincent de Paul is seen in an April 30 photo in front of a chapel that bears his name on the Washington campus of The Catholic University of America. (CNS photo/Chaz Muth)

Ten thousand members of the Vincentian family from all over the world are in Rome this weekend to celebrate with Pope Francis the 400th anniversary of their founding by St. Vincent De Paul (1581-1660), in the hope of advancing “the globalization of charity across the world.”

The Vincentian family, which includes priests (Vincentians) and nuns (the Sisters of Charity) and countless lay people, was founded 400 years ago by a young man from a peasant family in southwestern France, who was ordained a priest at the age of 19. He discovered his mission from two strong experiences he had as a priest in 1617: the experience of spiritual poverty in a rural area around the village of Folleville and the experience of material poverty in the city of Chatillon. Because of this, he set out to evangelize the poor by helping them in both spiritual and material ways. He spelled out his understanding of his mission and charism when he told the Sisters of Charity: “When you leave your prayer to care for a sick person, you leave God for God. To care for a sick person is to pray.”

Today, the Vincentian family is composed of some two million persons of all ages who follow his example in 156 countries and all continents, including at least 500,000 in the United States. Three other countries have big concentrations of Vincentians: Brazil, India and the Philippines, Father Joseph Agostino, coordinator of the international Vincentian family, told America.

Today, Father Agostino said, very many Christians, Jews and Muslims work with the Vincentians “because the charism of Vincent attracts people of all different races, creeds, languages, who have a heart for the poor and they understand the dignity and presence of God in the poor.” He summarized the charism this way: “Vincent gave us a model, the evangelization of the poor: to serve the poor both spiritually and materially, seeing Christ in them.”

Born in Brooklyn, N.Y., Father Agostino works from an office in Philadelphia and is also coordinator of this week’s symposium in Rome. It opens Thursday evening in St. John Lateran’s basilica, continues Friday with workshops on “Vincentian themes” and reaches its high point on Saturday when they meet Pope Francis in St. Peter’s Square.

This is the first time in its 400-year history that the Vincentian family has come together.

At the meeting with the pope, Father Tomaz Mavric, the 24th successor of St. Vincent De Paul, will officially launch their two major initiatives for the globalization of charity: “The Global Alliance for the Homeless” and “The Vincentian Film Festival.” The symposium concludes with a prayer vigil that same evening, and the celebration of the Eucharist on Sunday, at the Basilica of St. Paul’s Outside the Walls.

Father Agostino explained their three-year-long “Global Alliance for the Homeless” project is part of the mission of the Vincentians “to go out to the peripheries.” He noted that this is what Pope Francis is doing. Indeed, he said, “We laugh and say he should have been a Vincentian, not a Jesuit, because he has that spirit of love for the poor. Our spirit aligns with his.”

He recalled that “Vincent was not one who wanted to be in the cities, he sent out his missionaries to the most remote places, because that’s where people need to feel and experience the presence of God.” And, he added, “that missionary charism is very much at the heart of who we are. The challenge is always seeking those new peripheries, as new needs and realities develop, and that’s what we are in the process of doing.”

It is with this perspective that the Vincentians are launching their “Global Alliance for the Homeless,” he said. He described it as “another attempt by the family to go into an area that is in desperate need.” Homelessness is “a very big problem in the United States; every city has an area with underserved and inadequate housing.” Indeed, every country in the world has its homeless.

The Vincentian family hopes to help the homeless in two ways. First “by trying to sensitize society to the reality and plight of the homeless, to try and create momentum around systemic change so that we’re not just doing band-aid solutions but can really try to work to change the fabric of what keeps people homeless.”

Second, by trying to get all the members of the Vincentian family to work together on this project, rather than each person doing his or her own thing. The aim is “to harness our energies and gather collaborators to work with us, so that we can have a greater impact on the practical reality of the homeless, and the issues linked to it: housing, education and jobs. So, it’s necessary to look at the structures that create the homeless.”

This is the first time in its 400-year history that the Vincentian family has come together, Father Agostino said. They hope that from this symposium—and especially from their meeting with Pope Francis—they will give “new energy, a rekindling of the zeal that is part of the Vincentian charism, and that sense of family that all of us around the world are in this mission together, to advance the globalization of charity.”