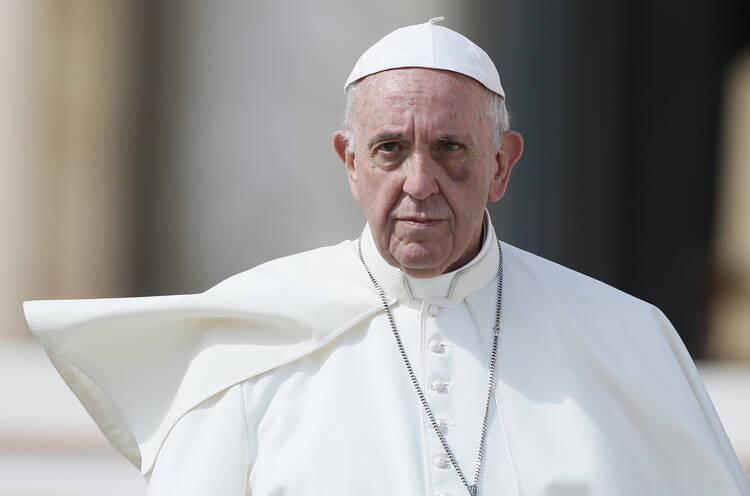 Pope Francis said that “the church irrevocably, and at all levels intends” to respond to the sexual abuse of minors with “zero tolerance,” in a meeting with members of the Pontifical Commission for the Protection of Minors this morning, Sept. 21.

Putting aside his prepared text, Francis told the commission of 14 women and men from 13 countries that they had “a right” to know what he thought about the subject.

Having listened to abuse survivors and having made what he described as a mistake in approving a more lenient set of sanctions against an Italian priest abuser, the pope said he has decided whoever has been proven guilty of abuse has no right to an appeal, and he will never grant a papal pardon. “Whoever has been condemned for the sexual abuse of minors can appeal to the pope for a pardon,” he said, but “I have never signed one of these and I never will. I hope that is clear!

Whoever has been proven guilty of abuse has no right to an appeal, and he will never grant a papal pardon

"Why? Simply because the person who does this [sexually abuses minors] is sick. It is a sickness.”

“Today the person repents, he goes forward, we pardon him, but two years later he does the same,” the pope said. He acknowledged that “the church became aware of this too late” to realize the gravity of the problem and the church’s own responsibility in the matter. Referring to the past practice of moving priests around, and not facing the problem, he thanked God for sending “prophetic men and women” in the church who involved others and got the church to face the problem head-on. Acknowledging that there is a backlog of cases to be dealt with in the Congregation for the Doctrine of the Faith, Francis said that more personnel would be assigned to this work.

The prepared text spoke of “the profound pain” that Francis feels in his soul “for the situation of abused children” and said, “the scandal of sexual abuse is a terrible ruin for the whole of humanity, which affects children, young people and vulnerable adults in all countries and in all societies.” For the church too, it is “a most painful experience” and “we feel shame for the abuses committed by sacred ministers.” The text referred to sexual abuse as “a horrible sin, completely opposed to, and in contradiction with what Christ and the church teaches us.”

Francis insisted that “the disciplinary means that the particular churches [in different countries] have adopted must be applied to all those who work in the institutions of the church.”

Francis also praised the commission, which over the past three years “has continually emphasized the most important principles that guide the efforts of the church to protect minors and vulnerable adults.” Expressing appreciation for the work being done by members of the commission, he singled out Cardinal Sean O’Malley and Marie Collins for their work.

The prepared text noted that Francis accepted the commission's proposal regarding responsibility in the church for the protection of minors, when he issued the motu proprio, “Like A Loving mother” in June 2016. That decree “addresses the cases of those diocesan bishops, Eparchs, and Major Superiors of Religious Institutes who through negligence committed or through omission facilitated acts that have caused grave harm to others, either to physical persons or to the community as a whole.”

The prepared text also mentioned a number of the commission’s proposals that have been implemented, including a Day of Prayer each year in local churches to dialogue with the victims and survivors and the fact that many bishops’ conferences have sought the commission’s advice regarding directives for the protection of minors and vulnerable adults. He praised the “valiant work” of the commission, especially for those churches with least resources.

The prepared speech concluded by expressing confidence that the commission would continue to be a place “where we can hear with interest the voices of the victims and the survivors because we have much to learn from them, from their personal histories of courage and perseverance.”

I pray to God that this new, bold, long-awaited acknowledgement of the Church's failure to support the victims of sexual abuse by clergy by Pope Francis is real and tangible. Pedophelia is a sickness for which there is no cure and the Church's long held practice of moving abusers from parish to parish, without ever informing the new parish of their crimes, must end. These priests should be defrocked and reported to the civil authorities without haste. As a teacher, I am obliged and held accountable for reporting any child abuse of which I become aware or that I suspect. My first reporting must be to the civil authorities and then, to the principal of my school. My duty is to the children in my care, not to the abusers. This should be the same standard held by the clergy of our Church!
The magnitude of the child sexual abuse cases in Australia under the "supervision" of Cardinal Pell should stand as an example of what should never be condoned. To read the accounts of the children who were abused and of the adults who committed suicide as a result of living with this abuse is heartbreaking! Pell moved these priests around and even accompanied the most dire abuser to court. Guess who accompanied the abused children/adults to court? No one from the church...not one soul! Cardinal Pell should be held accountable for shielding these abusers and live with the consequences of his inactions and his unwillingness to place the lives of the children before the corruption of his priests!

No mention of Mahony and the criminal bishops who knew and did nothing, who moved these monsters around so other children would be abused. Nothing the Vatican does will mean anything until these creeps see justice.

Did Marie Collins return to the commission? I was so sorry to see her leave, I respected her integrity in doing so, but I had hoped she might return.

Well, I guess Francis has found one sin which can't be forgiven. Busy re-writing last week's Gospel I guess.

All sins can be forgiven, but when the sin is a crime there are consequences for the sinner.

Ellen B
4 years 9 months ago

It's not forgiveness of sin, it's not allowing wolves to shepherd the flock.

In the three years that the commission has existed, how many members of the hierarchy have been called to account for the roles that they played in aiding and abetting pedophile priests? In some respect their sins are even greater than the pedophiles themselves, since they had the duty and the authority to intervene and stop these priests actions and failed to do so.
Besides the wounds inflicted on the direct victims of pedophilia, the larger wound to the laity, collectively, was that the bishops, collectively, placed the needs and the rights of the pedophile priests and the Church's "reputation" above the needs and rights of the victims and their families.

The pressures of the flesh are insistent. I am not Catholic, but I suspect that the Roman Church might find far fewer scandals if we made celibacy optional for priests.

Would it help if every Bishop and Religious Superior who,
in some manner, abetted, those who caused the scandal,
stepped down from their offices ?

Perhaps Francis should have said there is no "known" cure.
Minor surgery on the brain can eliminate sexual desires,
which would seem better than to go through the rest of
your life plagued by thoughts/impulses that one
should not seek to satisfy.

What does this "no appeal" mean? That his sin cannot be forgiven? It is understood that this is a grave and serious matter, as Christ Himself said of those who cause scandal to the little ones, "It were better for him, that a millstone were hanged about his neck, and he cast into the sea, than that he should scandalize one of these little ones." (Luke 17:2) But then he does follow that with, "Take heed to yourselves. If thy brother sin against him, reprove him: and if he do penance, forgive him." (Luke 17:3)

And how can such a condemnation come when in his own work "Amoris Laetitia" his Holiness wrote: "No one can be condemned for ever, because that is not the logic of the Gospel! Here I am not speaking only of the divorced and remarried, but of everyone, in whatever situation they find themselves"? It is true that eternal condemnation is very real, Christ Himself speaks of it. But if there is true repentance, has the sinner no recourse of appeal? So again, I ask what does this "no appeal" mean?

Ellen B
4 years 9 months ago

It means not allowing pedophiles to be placed in a position where they can continue to abuse.