A theology of trash: What I learned during my summer as a garbage man 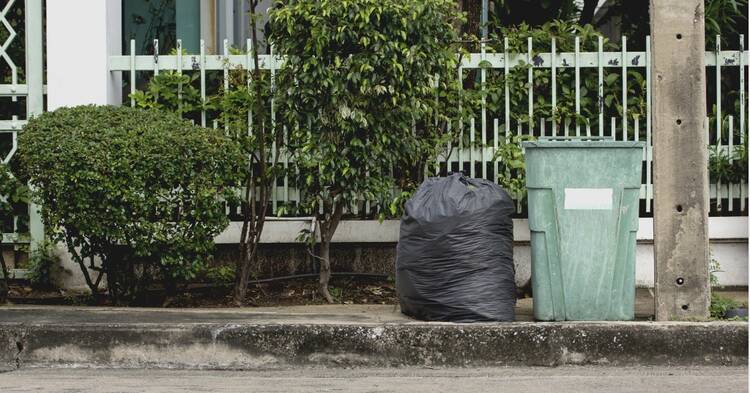 I jump off the back of the garbage truck and flip the first lid. Trash cans with wheels are the easiest. I pull one toward the back of the truck and let the momentum lift the weight. I bring down the side of the can on the lip of the hopper, and bags tumble into the stinking mess: coffee swirls with exploded ketchup packets and fetid leftovers. If there is a bulk pick-up, Craig, the driver, will come out to help me, but I am usually alone. It’s just me and people’s trash.

One summer during college, I worked for my hometown’s road department as a garbage man. I rode the back of the truck as the cool morning gave into the hot afternoon. Our route was taped to the dashboard: a thousand-time photocopied map of side streets and cul-de-sacs. We had to be finished by lunch. A swift run meant that we had time for an omelet and toast at the Hanover Diner and some days a nap at a dead-end street. I never could sleep for long. I was afraid that I would get caught. The other guys, who knew better, said that nobody would care unless we missed a house.

We have to throw away most of our lives.

We never did. Some people lined thick rubber trash cans against the curb. Others slouched over-stuffed bags over the curb, their contents spilled during the night. Bears loved to lap yogurt containers, and often left a trail of ruptured diapers and torn bags of fast-food across dewy lawns. Some people rushed down their driveway at the last minute, in robe and slippers, pushing one can in front and pulling one behind, as if a missed week of trash meant their home would be overwhelmed.

It might. We have to throw away most of our lives. Shredded bank statements. Mildewed jeans kept in a humid attic. Black and white televisions, their rounded screens split with cracks. High school quizzes, saved for a nostalgia that evolves into clutter. Wool sweaters pocked with jagged tears. Sooner or later, it all has to go.

A. R. Ammons once wrote, “garbage has to be the poem of our time because/ garbage is spiritual, believable enough/ to get our attention.” Before becoming a garbage man, I never gave much thought to dragging trash cans to the end of the driveway. I didn’t worry when I packed cans full of shredded grass spit from my father’s mower. I didn’t realize those heavy lifts probably stressed or strained some backs. We don’t understand most jobs, most lives until we inhabit them. I was only thinking of getting rid of what was not needed. Trash cannot stay in a house. The new has to replace the old.

There is only so much room—in our houses, in our hearts—and at some point, we have got to let go.

There is a rhythm to garbage. There is only so much room—in our houses, in our hearts—and at some point, we have got to let go. Unto dust we return our food, our pillows and sheets, our clothes, our mirrors, our carpets and rugs. Our material comforts serve a purpose, and then they become worn and warped, and they need to be tossed.

There is a strangely silent communion between us on the truck and the people who often leave very personal things—reams of bank statements, old college love letters—bundled in the road at the end of their driveway. It is an offering based on faith. Every other week was bulk collection. People would put out old recliners and chipped bookcases. Sometimes we found Atari consoles, warped from early morning rain, among the big items. We knew that people drove pick-ups after dark the night before, looking for tossed treasures to sell and maybe sometimes to keep.

That refrain, the idea of garbage given new life, makes me think of our once-a-week trek to the county recycling center. I climbed onto the edge of a giant dumpster and waved Frank back as the truck droned a loud beep. He dumped the collection of brown beer bottles, aluminum soda cans and half-and-half cartons into the dumpster. I turned my eye from the show of smashes and cracks, convinced a shard of something would cut me. This garbage would become useful again. And then it would be back here at the center.

Some people hoard their junk. They stuff more and more in back rooms and basements. Others throw their black bags in the back of a pick-up and drive them into the woods, where they are thrown to rest, are overgrown with brush and settle (or not) into the earth. Others burn their trash in 50-gallon drums and then the next morning spin the ash with a long stick to reveal garbage that survived the blaze: corners of candy bar wrappers, screws and nails. Most people placed their offerings curbside. Hacked and poorly-tied branches from a tree split during a storm. Supermarket circulars from years past or sunglasses smashed at the bottom of luggage.

We would take our weekly route to remove the unwanted, and after we left, there were a trail of empty cans, stuck like scarecrows in the road. When the wind didn’t lift the truck’s stench into my nose, and I could instead turn my head toward the sweet summer air, it all made sense. Garbage stinks, but somebody’s got to deal with it.

You provided a valuable service to the community by engaging waste management.

There is honor and dignity in hard work. Well done.

We used to burn our trash when I was young.
In old 55 gallon barrel - I stirred the ashes.

The Garbage we gave to a neighbour who had two pigs
and piglets.

Nick Ripatrazone’s essay, “A Theology Of Trash: What I Learned During My Summer As A Garbage Man,” is not just interesting, but also insightful and best of all beautiful! The final line of his essay says it best, “Garbage stinks, but somebody’s got to deal with it,

That line made me think of God as the Author of the Theology of Trash, the Garbage Collector of the Seas, a task under his guidance assigned to the Shrimp, a humble shell fish of the deep. This creature is a scavenger, dining on ocean debris, its job to keep the water ways clean. And so it goes about consuming as food, material that other sea creatures disdain mandated and instinctively directed by the Creator to enjoy its job, encouraged by these words, “Garbage stinks, but somebody’ got to deal with it and you’re the one!” I think there are others too, like Clams and Oysters, maybe others as well, who as scavengers also relish the requiems of the sea avoided by others, fulfilling their assigned tasks and liking it.

How miraculous to realize Shrimp, Clams, Oysters, can turn the dregs of the deep, ocean excrement in effect, into body content so delectable, that fish-lovers pay big bucks to dine on them! And to do so with delightful but very different culinary outcomes, Shrimps, Clams, Oysters dining on the same food in the deep, but providing body content different in flavor, one from the other!

It seems to me only an all-powerful God would be able to transform deadness into life, a new creation as it were, that redemption into heavenly repasts! And that’s exactly what happened – God turned death into a life-sustaining sustenance. So great! He is the very Source and Summit of all Goodness, our instinctive Divine Garbage Man of the Deep our Benificent Creator! Another reason why we should be front and forward in protecting our Common Home, Sister Earth?