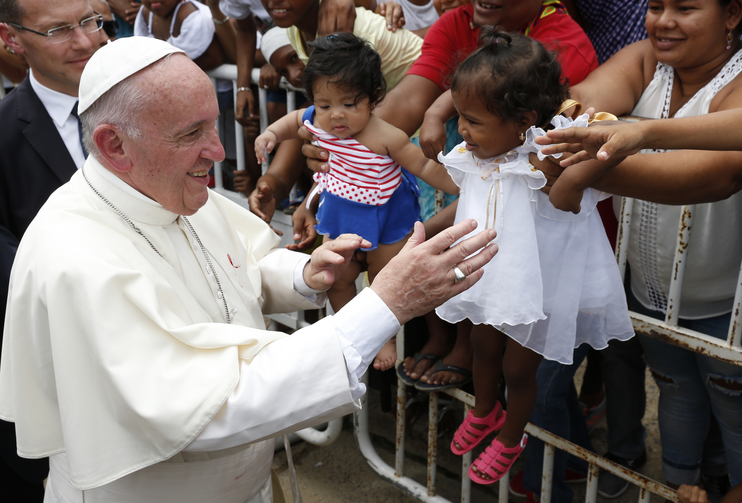 Pope Francis greets people near the Talitha Qum homeless shelter in Cartagena, Colombia, Sept. 10. The pope cut his head in the popemobile when it braked suddenly. (CNS photo/Paul Haring)

Like so many other people in Colombia and in the international media, Professor Alexander Buendía, who teaches at the University of Cauca, one of the country’s oldest and most distinguished institutions of higher education, evaluates Pope Francis’ visit to Colombia “very positively” from “many points of view.” He told this to America in an exclusive interview as the papal trip came to a close.

Mr. Buendía was born, lives and teaches in Popayán, the capital of the department of Cauca, one of the country’s poorest regions and one that suffered greatly during Colombia’s decades-long civil war. Like the majority of Colombians, Mr. Buendía was unable to attend any of the pope’s public events, but he followed them on television and the social media. He and his wife are members of the St. Pius X Secular Institute, which also counts among its ranks Cardinal Gerald Lacroix of Quebec, who worked here in Popayán, a city of 253,000 people, for nine years.

He described the pope’s visit as “supremely interesting and very enriching from many points of view.”

Pope Francis “showed a renewed face of the hierarchy—that of a pastor with the smell of the sheep.”

From the faith perspective, Mr. Buendía said, “the response of the Colombian people to the pope’s visit shows unequivocally that this is a majority Catholic nation, which sees in Francis a spiritual leader and that the church is dynamic.”

He pointed to the fact that “the pope brought together millions of faithful, both in the public acts as well as in the streets where he passed. It was a mass phenomenon such as I have never seen.” Some four million people attended Francis’ Masses, and millions more lined the streets to cheer him on.

“I think the pope brought the church closer to those who do not feel part of it, and he was able to connect also with the non-believers and showed a renewed face of the hierarchy—that of a pastor with the smell of the sheep,” he said.

Francis “is a pope who speaks clearly but, at the same time, speaks with serenity and goodness.”

Mr. Buendía, who teaches social communications, underlined the fact that Francis “is a pope who speaks clearly but, at the same time, speaks with serenity and goodness, and that enchants people because he makes transparent the love and mercy of God. He sets us right as a church, and he encourages [us] to go forward with hope.”

From the political perspective, the Colombian professor rated Francis’ visit “as most valuable.” Mr. Buendía said that “even if there is a political sector, a minority one but with much echo and presence in the media, that does not decisively support peace, the presence of Pope Francis was a clear invitation to seek the paths of pardon and reconciliation.”

Mr. Buendía agrees with the pope’s message to the Colombian people that “we must overcome the understandable temptation to vengeance” because “only in this way can we build a new country.”

“An imperfect peace is preferable to permanent confrontation.”

“We are taking the steps in this direction,” Mr. Buendía said, “and I believe that we who want peace are in the majority, even if it is imperfect. An imperfect peace is preferable to permanent confrontation.” He considers it significant that “the victims understand this perfectly well, and it is they who most support the peace.”

Still, the professor said, “there are voices that prefer to return to confrontation to seek a total military defeat of the enemy,” something “that could take another 50 years and who knows how many more millions of victims, of dead and displaced persons.”

Negotiations between the national government and the Revolutionary Armed Forces of Colombia, or FARC, have led to the demobilization of guerrilla groups and the end of military hostilities. But, he said, “an integral and sustainable peace in this time is still a pending task that we have as a nation.”

“The achievement of ending a five-decades old armed conflict is a gigantic step in the search for this peace.”

“The achievement of ending a five-decades old armed conflict is a gigantic step in the search for this peace,” Mr. Buendía said. “And this fills us with hope and encourages us to face the challenges ahead.”

Mr. Buendía explained “many challenges” remain at the local and national level that need to be confronted. “The biggest problems in Cauca are high levels of poverty and unsatisfied basic needs.” It is also one of the most unequal departments in the country, with wealth concentrated in the hand of a few.

He pointed to another disturbing fact: “After the signing of the peace accords, there was a series of assassinations of social and indigenous leaders, and even if the authorities affirm that these are isolated instances, the fact is a good number have been threatened and even assassinated.”

Pope Francis came “at the opportune moment and gave us encouragement and hope.”

Even before demobilization of the guerrillas, Mr. Buendía said, “the territories they controlled began to be occupied by other sectors on the margins of the law, including...paramilitary groups or drug-trafficking or criminal groups.” He said, “It is necessary that the state becomes a real and integral presence in these territories, providing accompaniment in every way and on all fronts to the civilian population.”

In the final analysis, however, Mr. Buendía said that “the principal problem of the country is corruption.”

“The signing of the peace accords has allowed us to see that even though the armed conflict was serious and caused many deaths, the corruption is worse and has reached unimaginable levels and permeated many strata of Colombian society,” he said. “This has caused social inequality, poverty and marginalization.”

Moreover, Mr. Buendía continued, “if the money that belongs to all is stolen, it is difficult to have sustainable development in the country.” In recent times, he said, “grave scandals of corruption have become known in different strata of our society, and for this reason we face serious problems of institutional legitimacy and political polarization.”

Mr. Buendía concluded his analysis by telling America that “there are a series of enormous challenges in the country which we will have to take up so as to build a better future for the new generations.” In terms of peace, he said, “the main challenge is to create the conditions for pardon and reconciliation because after many years of conflict there are many wounds that have to be healed and repaired and only then can we reach a true peace.”

Emphasizing the fact that “we are at a historic moment for the country,” Mr. Buendía said, “we believers must give a witness of hope and joy, of pardon and reconciliation, of the will to change and of peace.” Pope Francis, he said, came “at the opportune moment and gave us encouragement and hope.”

If you wants to play free online game then here on our website https://solitaire-klondike.net on just single click without any registration and download you will play klondike solitaire online game this is the multiplayer card game this game is full of fun and entertainment this is really an amazing and fantastic game you must have to play this game.

Peace is precious. Peace is the way forward.