Irish church aims to end stigma for the children of priests 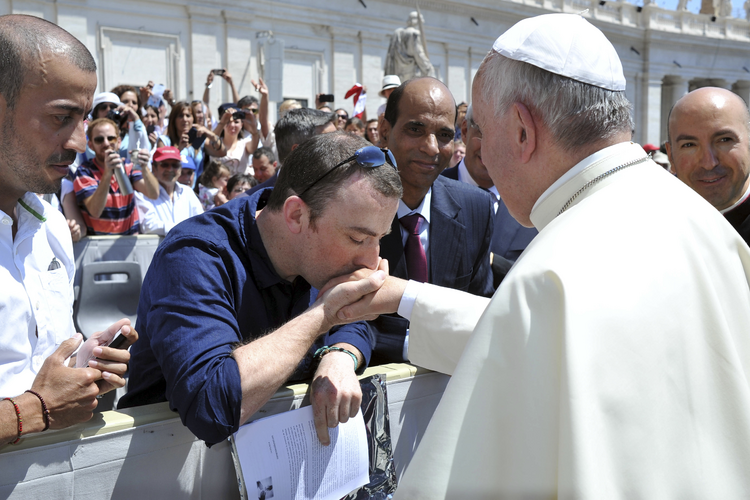 In this June 4, 2014 photo Irish psychotherapist Vincent Doyle kisses Pope Francis' hand during a general audience in St. Peter's Square, at the Vatican. With the support of the archbishop of Dublin, Doyle in 2014 launched an online resource for children of Roman Catholic Priests and was instrumental in the development of guidelines by the Irish bishops’ conference to address the issue. (Pool Photo via AP)

VATICAN CITY (AP) — Bishops in Ireland have created detailed guidelines to address an issue the Roman Catholic Church has tried to keep under wraps for centuries: the plight of children born to Catholic priests and the women who bear them.

The policy, approved in May and made public recently, states that the wellbeing of the child is paramount. It says the mother must be respected and involved in decision-making, and that the priest "should face up to his responsibilities — personal, legal, moral and financial."

The mother must be respected and involved in decision-making, and the priest "should face up to his responsibilities — personal, legal, moral and financial."

The guidelines are believed to represent the first comprehensive public policy by a national bishops' conference on the issue, which has long been shrouded in secrecy given the perceived scandal of priests having sex. While eastern rite Catholic priests can be married before ordination, Roman Catholic priests take a vow of celibacy.

The policy is, in many ways, the fruit of a campaign by an Irish psychotherapist, Vincent Doyle, who discovered late in life that his father was a priest.

With the strong backing of the archbishop of Dublin, Doyle launched Coping International, an online self-help resource for the children of priests and their mothers. The aim, he said, was to help eliminate the stigma he and others like him have faced, and educate them and the church about the emotional and psychological problems that can be associated with the secrecy often imposed on them.

Those problems, which can include depression, anxiety and other mental health issues, were the subject of an exhaustive series last week in The Boston Globe.

There are no figures about the number of children fathered by Catholic priests. But there are some 450,000 Catholic priests in the world and the Catholic Church forbids artificial contraception and abortion.

Even without publicity, the Coping International website has been accessed by 13,500 different people in 175 countries since its December 2014 launch, Doyle said.

"The issue is the mental health of children who are suffering," he said in a telephone interview this week.

"Even if I'm the only one, the church should do something," he said. "Obviously I'm not. But what is the church doing?"

"Even if I'm the only one, the church should do something. Obviously I'm not. But what is the church doing?"

Pope Francis addressed the issue in the 2010 book "On Heaven and Earth," written with a Jewish rabbi friend, in which he said if one of his priests told him that he had fathered a child, he would persuade him that his obligations to the child trump his right to be a priest.

"As a result, he should leave the ministry and care for the child, even if he decides not to marry the woman," then-Cardinal Jorge Mario Bergoglio said. "Because the child deserves to have a mother as well as a father with a face."

More recently, in the pope's landmark 2016 document on Catholic family life, "The Joy of Love," Francis said children should never be punished for the sins of adults. While he didn't refer directly to children of priests, he wrote: "If a child comes into this world in unwanted circumstances, the parents and other members of the family must do everything possible to accept that child as a gift from God and assume the responsibility of accepting him or her with openness and affection."

The issue is likely to come up at two big church events next year: the World Meeting of Families, which Francis is expected to attend in Dublin in August 2018, and the meeting of the world's bishops at the Vatican in October 2018 on how to better minister to young Catholics.

The Vatican must report to the U.N. Committee on the Rights of the Child on steps it has taken to assess the number of priests' children in the world and ensure that their rights are being respected.

In addition, the Vatican must report to the U.N. Committee on the Rights of the Child on steps it has taken to assess the number of priests' children in the world and ensure that their rights are being respected. In a 2014 report, the Geneva-based committee called for an end to the confidentiality requirements that the Catholic Church often imposes on mothers as a condition for receiving financial assistance.

Doyle said the Irish bishops' guidelines represent a first major step in addressing the issue, and said he hopes the policy can become a template for other bishops' conferences. Doyle has won the respect of church authorities because his campaign hasn't attacked the church but aims to help some of its most vulnerable people.

The Coping International website has a cover letter and form for children and their mothers to fill out and present to religious authorities when one of their priests is a father.

The cover letter was written by Dublin Archbishop Diarmuid Martin, who has fully endorsed Doyle's campaign. In the letter, Martin acknowledged the long-term psychological effects that can result from the "silencing and stigmatizing" that children of priests often suffer.

"I want you to know that there is a place for you in the church; there exists pastoral support to assist your concerns," Martin wrote.