When you’re tempted to be like the Prodigal Son’s older brother, remember this 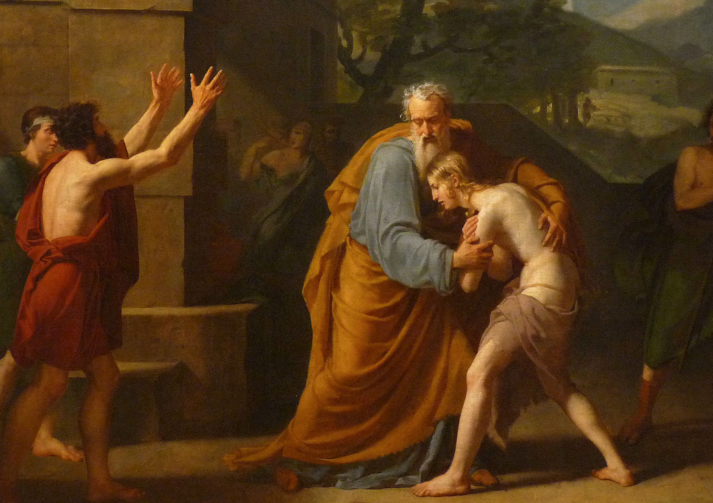 Once during adoration, someone nudged me in the ribs with an elbow. Which was odd, because the only other person in the room was an old man in high pants, deep in prayer or possibly fast asleep, way on the other side of the chapel.

I had been reading something about Jesus as brother, and there he was, by my side, pestering me.

It is hard to tell stories like this without coming across as spiritually self-congratulatory and/or insane. No, Christ did not appear in the flesh, and there were no beams of light or audible hosannas, but I sure felt that elbow with my actual, physical nerves.

I can still feel it, years later. It has meant different things to me at different times. One thing: Jesus is not a glowy, hollow-eyed, bleachy-robed, mystical, ultraman but a man, a guy, who looked and acted so normally that most of the world assumed he was just another Jew. Just our brother.

I thought of that nudge, that “by your side” sensation, when I was chatting with my husband about the Prodigal Son, who had a brother, too: the infamous elder brother. Commonly, Christians assume the elder brother is the Jewish people, kicking up a fuss as the Gentiles are grafted onto the tree. Or else maybe the elder brother is all of us, everyone who has been a good child to the father, and just cannot deal with the screw-ups getting mercy and welcome.

But my husband asked: What if the elder son is Jesus? Jesus, our brother?

What if the elder son is Jesus? Jesus, our brother?

He is the obedient son, the faithful one. The one who always does what his Father asks. And then there is this young punk, his little brother (that would be you and me), who is brought up in the same household but runs off and squanders everything on booze and prostitutes. When he finally staggers home again (and is he truly contrite or mostly just hungry?) his father rejoices, puts a ring on his finger, slaughters a fatted calf.

The elder brother is mad and hurt. He asks his father how this can be fair. He himself never got so much as a goat to eat with his pals, but here is his rotten brother getting a party. How is this right?

And his father’s explanation: You are always with me, and everything I have is yours. But your brother was dead, and now he is alive. And that is the only answer the elder brother gets from his father.

Christ is not annoyed with the Father for sharing his inheritance with humanity.

Never will you hear from me that Jesus has a problem with God the Father. That is dangerously close to the Nestorian heresy, which taught that Christ the human is distinct from Christ the divine. This teaching is false. God the Father and God the Son are always together, and everything the Father has does belong to the Son, but the mystical union of the Trinity is infinitely satisfying to all its persons.

Christ is not annoyed with the Father for sharing his inheritance with humanity. Christ freely chose to pour out his lifeblood for the salvation of that frivolous young punk, mankind. Far from resenting us for receiving such a lavish, unearned outpouring of the Father’s mercy, Christ’s perfect love made Him rejoice to personify that mercy, even as he bled.

And yet. Christ is our brother. I don’t know what to make of that elbow nudge, that insistent reminder that he is right next to me. I am not comfortable saying that Jesus is the elder son; but if he is my brother, he is brothers with the elder son, too. Even if he did not resent his little brother the way the elder son in the parable did, he almost certainly understood the resentment.

The church is a big tent. But it does have walls.
Simcha Fisher

Here is what I am left with: That nudge in the ribs felt jocular but also challenging, very much like a typical older-brother jab. Pestering the younger ones but also getting them to rise to the occasion, get stronger, have courage. Be more like your brother.

When we play the part of the elder brother in our own lives—when we see the punks, the screw-ups and the bums getting second and third and fourth and fifth and 100th chances and coming into yet another inheritance they did not earn, plus a ring and a hug and a party just for being alive instead of dead—then that is our call to remember who is by our side.

Have courage, says our brother Christ. I do know how it is. No, it is not fair; but it is better than fair, and you'll see how if you will come and sit with me.

Elder brothers of the world, you are not alone. Christ is right by your side.

I can certainly identify with the spoiled YOUNGER brother. I abandoned the love of my family by striking my loving Dad when I was drunk and was upset because I was depressed about being gay, and stole money from my loving Mom to have sex with prostitutes. However, I am grateful to my family, friends, former co-workers (I'm a retired Special Education teacher who now lives in a good nursing home/rehabilitation center) for accepting and loving me despite my own distress about my sexual orientation. I have often watched the two children of my elder brother Kevin, and although I often feel left out because I'm single and have no children, I feel fortunate that as a teacher, I was blessed.to be a "surrogate" father. Also, my brother is a loving husband, son, father, and is in many ways like Jesus, who loves God and his neighbors. I do my best to help others, and about once a month confess my many sins as an imperfect Catholic to my compassionate pastor during the Sacrament of Reconciliation. I also pray daily, not only for my intentions, but for the intentions of those whom I love, and even try to pray for those I don't particularly like. I hope that Jesus, our loving Savior, will have mercy on me.