The church is a big tent. But it does have walls. 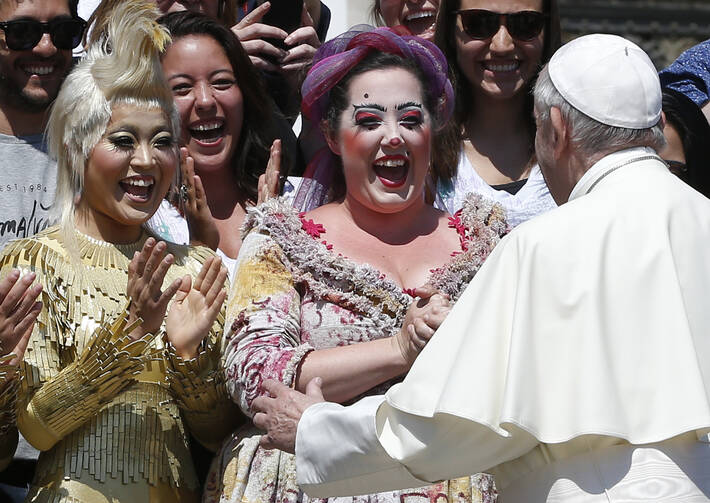 Pope Francis greets artists from Cirque du Soleil during his general audience in St. Peter's Square at the Vatican May 31. (CNS photo/Paul Haring)

“They got two Hail Marys going,” my husband whispered. And so they did. The lector near the front of the procession was calling out, “The Lord is with thee!” but the folks in the back were already up to “the hour of our death.” It was the Corpus Christi procession, which miraculously comes on the hottest, muggiest, least walkable day of the year. Father, in his heavy vestments, sweated a river before we even left the church grounds.

According to tradition, we had forgotten the stroller. A few of the kids sulked fruitlessly, and one was shoeless, possibly underwearless. Our mostly pagan 5-year-old scuffled joyfully through hawkweed and asters, openly worshipping summertime. We paused as an elderly woman helped her even more elderly mother assemble her walker, and the procession bunched, broke apart, thinned out and then re-formed. And the battle of the rosaries continued: “Pray for us sinners...” “Full of grace, the Lord is with thee!”

Besides the time I almost got shanked by a four-foot-high nun trying to get a photo of the pope, this procession was the most Catholic thing I had ever experienced.

Besides the time I almost got shanked by a four-foot-high nun trying to get a photo of the pope, this procession was the most Catholic thing I had ever experienced. A few folks were loudly gabbing about the weather, while others tripped on the curb, their eyes screwed shut as they prayed. Someone’s suffering, veiled abuela hobbled painfully past her contemporary, a fellow sporting athletic shorts and a pendulous ear gauge. A woman hung in the doorway of the Church of Christ, Scientist, gawking through the screen at this Church of Christ, Everyone. The traffic roared, the squirrels groused, and we lurched on, praying as we went.

We make this procession every year to bring Christ out into the streets, to proclaim that we really believe this strange little white host is actually God’s real, physical body. We’re so excited to have Him, we want to go run and share Him.

We make this procession every year to bring Christ out into the streets.

The emphasis of the day is on Christ in the Eucharist, his body, blood, soul and divinity. But as we climbed the hill, I thought: “And we are the Body of Christ. This is what it looks like: like us.” Kind of a mess, but by God, at least we’re all headed in the same general direction.

It was an emotional moment, one that is maybe a little too easy to package into a feel-good lesson about unity and tolerance. Before you know it, at times like this, you’ve stumbled past cliché into heresy. The church is universal and exceptionally tolerant of different kinds of spirituality; but, like the Israelites in Sunday’s first reading, we still do have to follow the commandments. You’ll see folks in all stages of health and development in this “field hospital for sinners,” but there are some beliefs, some attitudes, some behaviors and, yes, some people who simply cannot rightly call themselves “Catholic.” It is a big tent, but it does have walls.

If you want to call yourself a part of the Body of Christ, then make sure it is Him you are following.

It is not enough to say, “We all basically want the same thing, so why sweat the details?” Some details are more important than others; and it is all too easy to believe that all the unappealing aspects of our faith are the meaningless details, while all the stuff that comes easy is the truly true heart of Catholicism.

Nevertheless, in this year so marred with wild and violent divisions, so blighted with chaos and strife, I saw on that feast day what I desperately needed to see. Strolling, marching, stumbling, straggling or being pushed along by someone stronger, we were all following Christ, literally. I could see the shining rays of the monstrance up ahead, and that is how I knew which way to go. Father’s arms must have been numb, but still, he held the monstrance up, and still, we followed.

We celebrate the Eucharist every week. Why do we need Corpus Christi?
Terrance Klein

We made our way to the grassy commons for a short benediction. Father climbed the steps of the little gazebo, and the rest of us rested in the shade of the trees, bathed in the light of the presence of God. We were the Body of Christ. It is the only thing worth being.

Walk how you want. Wear what you want. Be stoic or reverent or jocular; look left and right, admire the view, or keep your head down. But if you want to call yourself a part of the Body of Christ, then make sure it is Him you are following—not only on Sundays, not only on solemnities, but every day, in your family life, in your work, in your friendships, in your sexuality, in your politics, in the way you approach one another. Make sure He is why you do what you do.

Why are the walls so important to you? When did Jesus build a wall? He is famous for a ministry of love and mercy. How are walls part of following Him? How do you decide where to place these walls of yours? Do you not see the face of Christ among the strangers outside your wall?

Lovely writing on the Corpus Christi procession and Catholic culture, reminding me of those hot June Sunday afternoons when we all walked the lanes of the Motherhouse of the Sisters of Charity of Nazareth bringing our belief, and our Lord, to the streets. I watched the one in Rome this year, from St. John Lateran to the Basilica of St. Mary Major. It was impressive.

These outward signs are important. Recently Joe Biden, talking to Terri Gross on Fresh Air, spoke about how much comfort he got from the outward gestures of the Catholic faith. The anointing. The crossing. The processing. We are human, after all, and we are more than just words and intentions, but physical and visible beings.

I would quibble about the walls, though, and the people who cannot rightly call themselves "Catholic". Inclusiveness IS the hard part. Isn't this mixing tribalism up with theology? Yes, there is a Catholic culture that is built up around believers. But there is also the Body of Christ, which includes every last one of us, believer and non-believer. Is the Catholic Church a club or is it the communion of God's people on earth?

What is meant by the "unappealing aspects of our faith", or the "truly true heart of Catholicism"?

Briefly, the walls DO keep us from falling off the cliff, and I suppose the "unappealing" aspects of the faith are those times when we recognize that Christ wants us to pick up our cross and follow Him. It wasn't "appealing" to St. Teresa of Calcutta when she described feeling "physically ill" the first time she lovingly picked up a dying, maggot-infested man from the gutter because in him she saw the face of Jesus. "As often as you have done it to the least of my brethren, you did it to Me."
The joy comes in loving the will of God.