Remembering 9/11 as a Christian, not an American 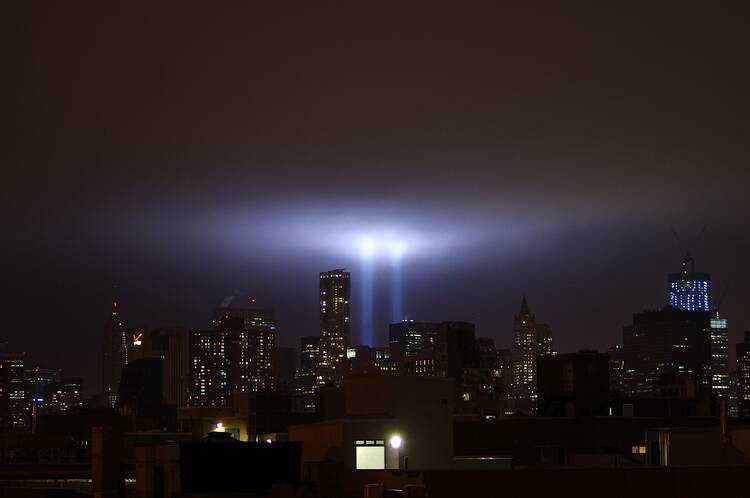 When I was living in London, each year on the anniversary of 9/11, I would encounter one or two sympathetic Englishmen who assumed that, as an American, I might have something special to say about the event. I didn’t then, nor do I now. I suppose I have some memories that are peculiar to me as a U.S. citizen; and I did, in fact, know someone who died on that awful morning. Yet when I call to mind those anxious hours, I do not remember as an American but as a Christian. “Think of the Commandments,” the Scriptures say, “hate not your neighbor; remember the Most High's covenant, and overlook faults.”

Overlook faults? How is that possible? How is it possible to forgive those who with cruel intention and without regret committed the mass murder of thousands of innocents? Frankly, the how of forgiveness is not so clear to me. What is clear, however, is that Jesus Christ himself asks me, no, he commands me, to forgive them. Time after time Jesus calls on his followers to forgive, not just the people we love, but especially those we do not. Why? As Sirach reminds us, “Wrath and anger are hateful things.” In other words, at a minimum, we forgive to free our souls from the wrath and anger that lead to death. To choose forgiveness is to choose life.

How is it possible to forgive those who with cruel intention and without regret committed the mass murder of thousands of innocents?

We forgive also because it is the ultimate act of justice. Jesuits like to say that the Catholic faith is “a faith that does justice.” That is true, but in isolation that phrase fails to capture fully the truly radical nature of our Christian calling. The ultimate reason for our hope is that our faith is the faith that does forgiveness, the faith that reconciles, even in the face of the most ferocious injustice. The work of social justice is an important dimension of Christian living, but forgiveness is our distinctive calling, the unique way in which we are invited to co-create with God, to create new possibilities of conversion and justice. Even if those who have offended us do not ask for our forgiveness, forgiveness is still powerful enough to transform our own hearts, to convert us from hatred to love, from fear to faith. Jesus himself pointed the way when he exclaimed from his cross, “Forgive them, Father, for they know not what they do.”

Still it seems impossible, doesn’t it, this radical life-changing forgiveness? Yet it only “seems” impossible. It must be possible. “The Lord is kind and merciful and rich in compassion,” the psalmist tells us. In other words, God does not ask us to do what is impossible. That would be cruel. Yet he also knows that we cannot do the difficult work of forgiveness without his help, without the aid of grace. And so we pray. We pray to see our enemies as our neighbors; we pray to see them as God sees them. We pray for the grace of understanding, of compassion; we pray, we plead if we must, for some share in just a tiny bit of God’s infinite love and mercy.

This much we also know: Forgiveness—for the perpetrators of 9/11, for the perpetrators of all violence whether global or local, in word or in deed—in the end, forgiveness is our only hope. I mean that literally. Forgiveness is the only way out. For 9/11, in all its horror, was just one day in history’s long rampage of war and destruction. The Gospel is clear: if we believe that we will escape this vicious cycle of violence without the radical acts of love and forgiveness to which the Gospel testifies and Christ commands us, then we are simply fooling ourselves.

I do not know what justice was or might have been for the 9/11 hijackers. Only God knows that now. Yet during these many years of grief, in which I have moved from sadness to rage to resignation and back again, I have learned anew that forgiveness is the final measure of our love for one another. I have learned anew the meaning of that favorite hymn, as familiar to you, I’m sure, as it is to me: “Let there be peace on earth; and let it begin with me.”

I have learned anew that forgiveness is the final measure of our love for one another.

O.K., so be it. I speak for myself and for no one else: To Mohamed Atta and your 18 fellow 9/11 hijackers, wherever you are according to the judgment of God: For the sake of the world’s peace and for the sake of my own, I forgive you. I pray for those you killed and for their loved ones, that they may know the peace that comes to us through Christ, the peace that you denied them.

And finally, to you, my brothers and sisters in Christ, I ask for your forgiveness “for what I have done and for what I have failed to do. And I ask the blessed Mary, ever virgin, and all the angels and saints to pray for me—to pray for us— to the Lord our God.”

I know the exact moment when I learned that the towers had been struck. I was a teacher in NYC and was responsible for over 300 children (Grades K-3) on that day. The panic, the horror, the prayers to God by so many who wailed to the Heavens will never be forgotten by me. After all of my students were dismissed, I began my own journey home. I was stunned to see the Avenues filled with people covered in dust - some with shoes, some without, and for some, clothes in shreds. These were the survivors of that day. They walked in trance-like symmetry - they resembled the walking dead! I cannot forget any of the images that still live vividly in my heart and mind. Forgiveness? 16 years removed and I am not yet able to do this - maybe one day.