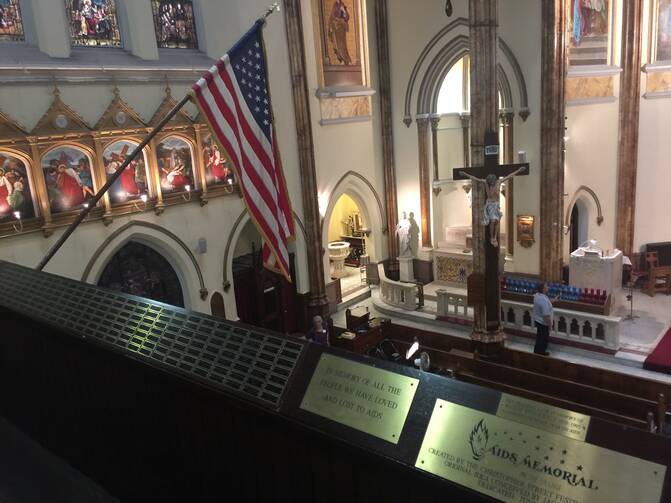 As the H.I.V./AIDS epidemic upended countless lives in New York City in the 1980s, a squat brick-red building in Greenwich Village became an unlikely focal point for many gay men, as well as their friends and families, struggling to make sense of the suffering.

But three decades later, with the AIDS crisis under control and changes in attitudes toward religious practice, about 200 people gathered inside that building on July 23 to bid farewell to the Church of Saint Veronica. Even as the church prepares to shutter for good, questions remain about what will happen to its many artifacts, including a humble AIDS memorial that historians say is one of the first public memorials to victims of the plague years in New York.

“You know, I do tours of churches. So I’ve been around to almost every place in Manhattan, so I’m so familiar with churches,” Terri Cook, who attended Mass at St. Veronica’s for a number of years and who is part of an effort to keep the building open, told America. “But there’s an aura here that’s just indescribable. It really is.”

The church opened in 1890 and its own history mirrors that of changes in the West Village. It first served Irish dockworkers and their families and later on, as members of the parish headed off to two world wars, a plaque was installed near the church’s entrance to honor those men who gave their lives fighting for their country.But it was the AIDS crisis that most dramatically shaped the St. Veronica’s community.

“St. Veronica’s is located on Christopher Street, which historically has been the center of the L.G.B.T. community in New York,” Andrew Berman, executive director of the Greenwich Village Society for Historical Preservation, said. “Like all of Greenwich Village, it was impacted quite heavily by the AIDS crisis.”

“It was the saddest thing you’ve ever seen. You just wanted to cry,” she said, recalling the mothers, in particular, mourning the loss of their dead sons.

He noted that in 1985 the church rectory was given to some of Mother Teresa’s nuns, who opened one of the city’s early AIDS hospice centers. A few years later, in 1991, the church installed the memorial, a series of plaques with the names of men who died from the disease drilled into the choir loft. A small table with fresh flowers and a lone candle completed the memorial.

For many, this out-of-the-way memorial, somewhat hidden up in a choir loft, was one of the few places where they could grieve the deaths of loved ones. Ms. Cook said she often witnessed individuals climbing the rickety wooden steps leading up to the memorial.

“It was the saddest thing you’ve ever seen. You just wanted to cry,” she said, recalling the mothers, in particular, mourning the loss of their dead sons.

The Rev. Kenneth Smith, the pastor of the church beginning in 1990, said he reached out to leaders from the gay community to see how the church might help. He was met with skepticism, the result of difficulty between the institutional church and the gay community. But of those suffering with few spiritual resources, he said, “I was certain they needed a priest.”

Mr. Berman, the historian, reflected on some of the tension.

“While the Catholic Church has had a sometimes uneasy relationship with the L.G.B.T. community and faced heavy criticism because of it,” he said, “There’s also been ample evidence, particularly in the Village, of Catholic institutions and Catholic-affiliated institutions like St. Veronica’s or St. Vincent’s Hospital...taking some bold steps in addressing the presence of AIDS in this community.” St. Vincent’s closed its hospital doors in 2010.

“The problem was,” she said, “the Roman Catholic Church had shut out most of the AIDS victims. The cathedral was sealed to them.” But St. Veronica’s was different, she said. Beginning in 1991, it hosted an annual interfaith prayer service for people dying of AIDS, a tradition that continued until 2015.

Monsignor Smith said people dying from AIDS often had no one to pray with them, a role he tried to fill for several years during the height of the crisis.

“It was like to ministering to anyone else who’s dying from a disease. If you were a priest, you’d understand what I mean,” he said. “They’d go to a hospital. I visited them in the hospital. I administered the sacraments. I’d be with them when they died. I would celebrate their funerals.”

While the ministry made sense to him, he said ordinary parishioners were sometimes less accepting. Ms. Cook recalled some leaving the parish altogether because of the church’s outreach to those suffering from the disease.

“It was difficult. Extremely difficult,” Monsignor Smith said. “There were many people who didn’t think the church should be involved with people who were suffering from AIDS or involved in the burial of people who died with AIDS.”

On July 23, alumni from the former parish school, members of the Missionaries of Charity and longtime stalwarts of the parish gathered for one last Mass. The church’s art, colorful depictions of the stations of the cross and other events from the life of Christ, had been restored over the previous decades—its radiance something of a shock to alumni who had not visited in a long time.

The future of the building is not known. It was granted landmark status about a decade ago, which means it cannot be torn down or significantly altered. A local activist is hoping that a music ensemble affiliated with a nearby Episcopal church might make use of the space. Mr. Berman, the preservationist, wants it to remain open to the public, and some parishioners are appealing to the Vatican to keep St. Veronica’s open as a worship site, possibly attached to another parish.

Joseph Zwilling, a spokesperson for the archdiocese, said in an email to America that the decision to close St. Veronica’s was made at the parish level. The number of worshippers has been dwindling in recent years, with fewer than 100 people attending services each weekend.

Since the church itself was downgraded from a parish a decade ago, the recent closure was not a surprise to many. As for the AIDS memorial, Mr. Zwilling said “items of sacred, historical, or financial value are assessed and stored for possible future use in other churches.”

But Ms. Cook refuses to think about a future where St. Veronica’s is shuttered.

“What we’d like to do, we’d like to be assigned to another parish. We know that we can build this parish back up,” she said. “What [St. Veronica’s] does is it tells the history of Greenwich Village. How sad would it be if it never opens again.”

Anna Marchese contributed to this story.

Please figure out a way to link online subscribers to allow reading FB posts.
Understand increasing paying readership, To read the above article I went
off Facebook and onto my current America issue online. No problem if you
want to keep it this way.

I lived blocks from this church in the 80's and 90's during the height of the AIDS crisis in the Village. This church needs to be preserved perhaps as a house of prayer or for other appropriate cultural events, maybe linked to St. Joseph's in Greenwich Village, another church with many gay parishioners and a history of outreach to the community. Despite the historically frosty relationship been the church's hierarchy and the gay community, this St. Veronica's is sacred ground to those who suffered through the AIDS epidemic.