Pre-Cana or Engaged Encounter? America readers tell us how they prepared for marriage 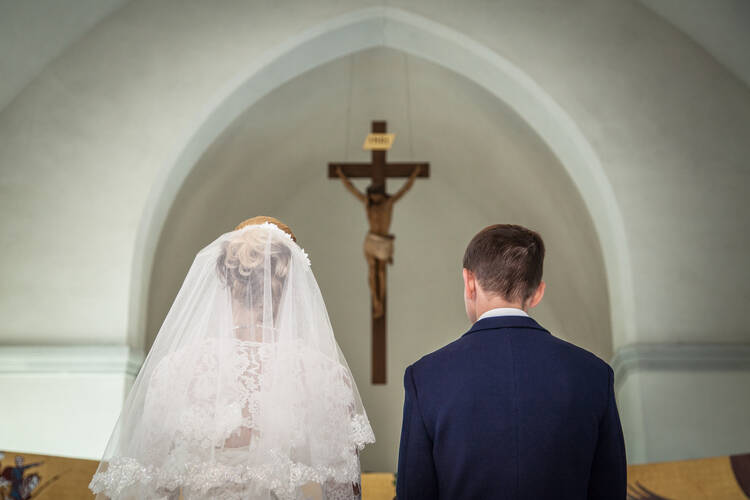 When asked to characterize their experience of marriage preparation, the most common response among America’s readers (33 percent of respondents) was “very positive.” Kate Murray of Arlington Heights, Ill., was one such reader. “We met with the priest who helped us see past the wedding and into the marriage,” said Ms. Murray. “We spent lots of time recognizing that we won’t always see eye to eye and then discussed positive ways to work together.”

Only 9 percent of our reader sample said they had a very negative experience of marriage preparation. These readers gave various reasons for their disappointment. Jena Thurow-Mountin of Collegeville, Minn., told America that her course lacked the idea that the church should “support married couples beyond the wedding day.” Ms. Thurow-Mountin added: “Marriage preparation is a fantastic opportunity for evangelization, catechesis and pastoral care—our diocese dropped the ball on this opportunity.”

A large contingent of readers gave various neutral (17 percent) or mixed (somewhat positive: 21 percent; somewhat negative: 11 percent) characterizations of their marriage preparation. Tom Lavin of Baltimore, Md., noted that due to “the instructors’ reluctance to go off script at all, the course really didn’t help us deal with issues.” Lesley Geldart of Cleveland, Ohio, also described her marriage preparation as neutral. “The approach seemed to be, ‘Let’s figure out every disagreement you might have in your marriage and solve them before you get married.’ But that’s not how married life works. What matters in marriage is unselfish love and communication. Not who takes out the garbage or even where you’ll go to church.” 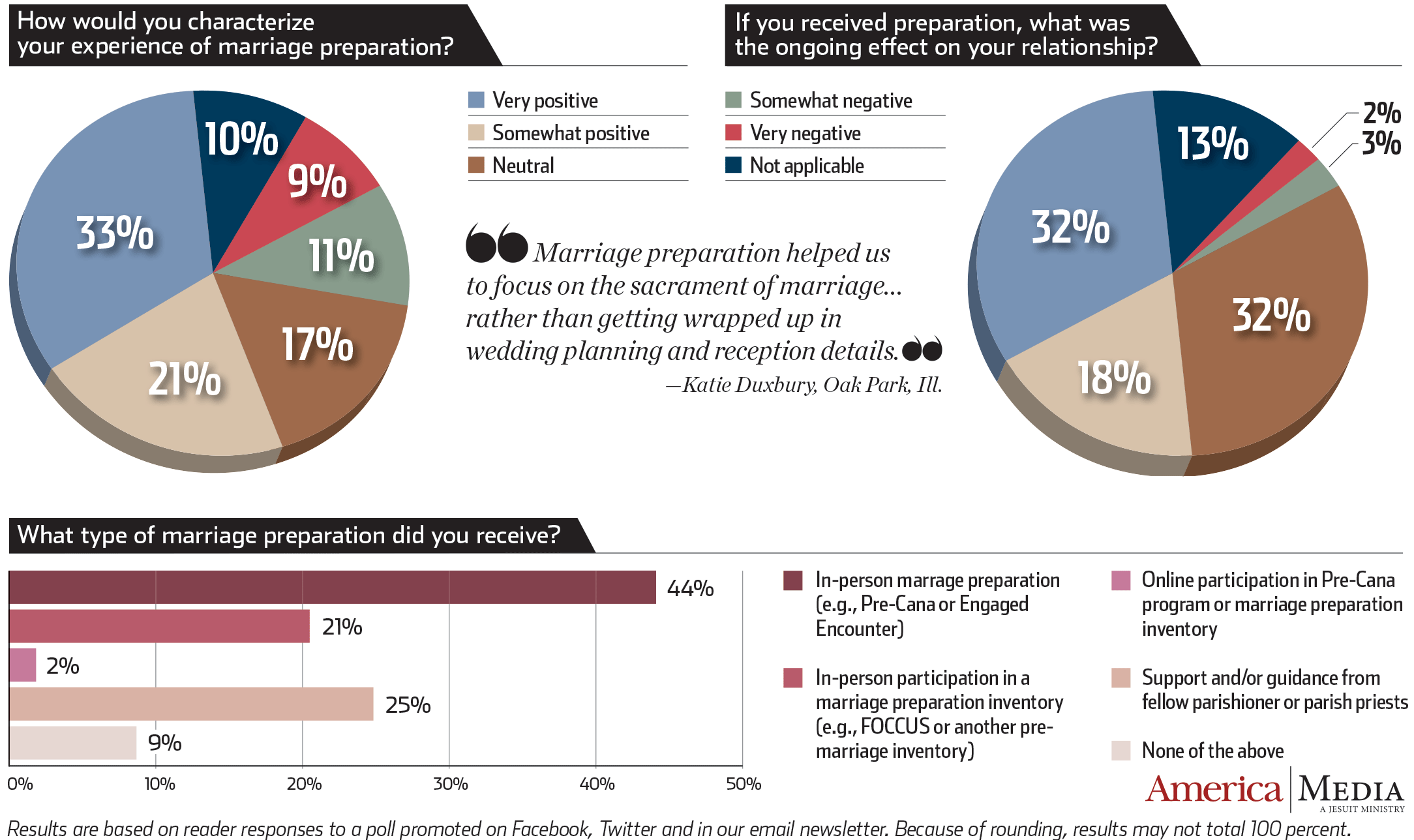 Our parish has regularly sent engaged couples to an Engaged Encounter program after the initial pastoral interview. After that experience, we then help them with a time of "debriefing" and begin the task of planning their wedding ceremony in detail. Most couples now expect to do an Engaged Encounter weekend and when they return they thank us for insisting that they go. One issue that needs constant attention is mixed marriage. Often only one of parties has been raised in any religious faith tradition. Non-catholics appreciate some insights into the Catholic faith, including similarities with other Christian faiths as well as specific rituals and traditions that differ, especially the Real Presence in the Eucharist. Many times this opens the door to later deeper exploration through RCIA.

I don't think this survey is very helpful in understanding the trends/problems that other surveys have historically pointed to among Catholics: low Mass attendance, a high divorce rate, and the low percentage of Catholic children who do not attend RCIA education or Catholic elementary and high school.

It also does not attempt to breakdown how Catholic couples who enter the marriage encounter truly understand and believe in the Church's doctrine on marriage. For example, it would interesting to know:

> What percentage of Catholic couples believe that divorce and remarriage is sinful and prohibited regardless of the reasons (e.g., adultery and abandonment)?
> How many believe that the innocent spouse must practice a lifetime of sexual abstinence and can only remarry upon the death of the other spouse?

There are no easy answers to the problems we face. However, I believe that one step in the right direction must start with adequate Catholic RCIA education. By this I mean that RCIA education should be expanded as a requirement through high school or the 12th grade. During high school years, theology and practical courses in moral decision-making should be taught, much like in some Catholic high schools.

Nevertheless, it would be interesting to know if a survey would uncover a significant difference in beliefs between those couples with a standard RCIA education and those who went to Catholic elementary and high school. I can tell you from my limited experience, I would not be surprised is there was not much of a difference. Therefore, I believe that the answer may reside in the 'message' or what is taught which will have to change.