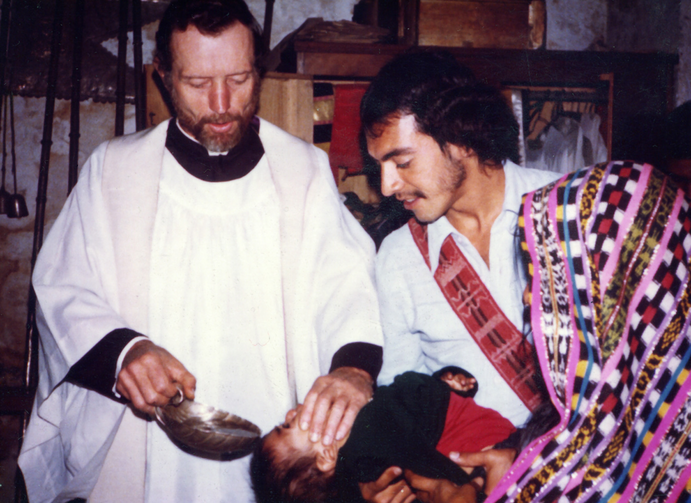 Father Stanley Rother, a priest of the Oklahoma City Archdiocese who was brutally murdered in 1981 in the Guatemalan village where he ministered to the poor, is shown baptizing a child in this undated photo. (CNS)

Okarche is a farming town of 1,200 people, just to the north and west of Oklahoma City. Settled by German immigrants, its two largest churches are St. John’s Lutheran and Holy Trinity Catholic. Eischen’s Bar is the town’s claim to fame. Purportedly the oldest in the state, it has a renowned but secret fried chicken recipe.

Franz and Gertrude Rother raised three sons and a daughter on a farm outside Okarche. Stanley, their oldest son—tall, slender and strong—was adept at farm work, which he relished. He also loved being an altar boy at Holy Trinity. When he graduated from high school those two loves seemed to diverge. Stanley told his parents that he wanted to be a priest. His father laconically replied, “Why didn’t you take Latin instead of working so hard as a Future Farmer of America?”

Stanley excelled as a sacristan, groundskeeper, bookbinder, plumber and gardener—but not at his studies.

Franz had a point. Seminary studies were quite difficult for Stanley. At Assumption Seminary, in San Antonio, Tex., he excelled as a sacristan, groundskeeper, bookbinder, plumber and gardener—but not at his studies. Asked to withdraw, his hometown pastor took him to see Bishop Reed in Oklahoma City, who asked him, “Do you want to be a priest, Stanley?” The young man answered, “Yes, but it’s all over for me, isn’t it?”

It wasn’t. The bishop let Stanley bat one more time, and, a few years later, the rector of Mount Saint Mary’s Seminary, in Emmitsburg, Md., could write to Bishop Reed that “Mister Rother has made excellent progress at this seminary and he should be a very valuable parish priest.”

Stanley was ordained in 1963 and served five years as a parochial vicar, in four churches of the diocese, before he volunteered for the Catholic Mission of Oklahoma in the Diocese of Solola, Guatemala. His first assignment there was the ancient Catholic Church in Santiago Atitlan, a village of 40,000 souls cradled in the country’s western highlands. Thirty thousand of them were Tzutuhil Indians, descendants of the Mayans.

The country is as lush and beautiful as western Oklahoma is arid and windswept.

Population density was not the only contrast. The country is as lush and beautiful as western Oklahoma is arid and windswept. Yet it was, as Ron Jackson, writing in The Oklahoman, put it, a paradise in hell.

Locals were plagued by a miserable poverty, malnutrition and a litany of health landmines. Before Rother’s arrival, nine out of 10 people were afflicted by intestinal worms from drinking polluted water. Flu, diarrhea and measles claimed the weakest, while malnutrition killed roughly half of the children by the age of 6.

An Oklahoma contingent of Catholic missionaries fought back after their arrival in 1964. They dug wells, opened a clinic, started an experimental farm, and began schools.

The farmer in Father Stanley rose to the challenge. He was once seen operating a bulldozer from 7 a.m. to 4:30 p.m., stopping only to celebrate Mass. He mastered Spanish and then Tz’utujil, the local Mayan tongue, preaching and celebrating Mass in it, and eventually translating the New Testament into it.

The God of many of our contemporaries does not come to us through the mediation of others: not holy men and women, nor prophets, nor priests, neither saints nor church. No, the strongly held but deeply shallow conviction of our contemporaries is that, whatever God might be, God is something to be approached on our own terms: at a time of our choosing, according to our own understanding and in the manner we see fit to choose. Hopefully, in God’s mysterious mercy, they are right. Even so, their attitude is far removed from the witness of the Scriptures and the preaching of Christ.

The God of many of our contemporaries does not come to us through the mediation of others: not holy men and women, nor prophets, nor priests, neither saints nor church.

In Second Kings, an unnamed woman in Shunem gives the prophet Elisha “a little room on the roof” and furnishes it “for him with a bed, table, chair, and lamp” because he is “a holy man of God” (4:9-10). Through his intercession, she will be blessed with a child.

The Lord Jesus, speaking of the reception his disciples will receive—those present and future—spoke of taking up the cross and of losing one’s life. Yet he insisted that

Father Rother’s people loved him. Their language had no equivalent for the name Stanley, so they called him by his middle name of Francis, which in Tz’utujil became Padre A’Plas. They certainly did not think of God as a mystery that they themselves could master on their own terms. They looked at this man and others like him as visible channels of God’s presence, God’s compassion, God’s mercy.

Father Rother’s people did not think of God as a mystery that they themselves could master on their own terms.

In the 1980s Guatemala was torn by civil war. The government essentially presumed that poor people were the enemy. Father Rother reported that soldiers with submachine guns

didn’t do anything but put everyone on edge, walking around in groups of three or four, standing on the corners watching everything…. [W]e have had strangers in town, asking questions about the priests, this catechist or that one, where they live, who is in charge of the Cooperative, who are the leaders, etc. Because of this intimidation, several of the leaders of the different organizations are out of town or in hiding.

By then, four priests had already been murdered in Guatemala. In one parish, Father Rother spoke of “about sixty men of the Church lined up by the wall” and soldiers “killed every fourth person.” He explained:

The Country here is in rebellion and the government is taking it out on the Church. The low wages that are paid, the very few who are excessively rich, the bad distribution of land – these are some of the reasons for widespread discontent. The Church seems to be the only force that is trying to do something (about) the situation, and therefore the govt. is after us. There are some that say the Diocese of Solola, where the mission is, is the next area on the list for persecution.... The reality is that we are in danger.

Called to Be Sent
Michael Simone

Learning that his own name was on a hit list, Father Rother fled for his life, but, back in Okarche, after only two months of rest with his family, Stanley told his brother, Tom, “A shepherd cannot run from his flock.” The priest returned to Guatemala.

On July 29, 1981, three armed men broke into his rectory and forced a terrified servant to lead them to the pastor’s door, which Father Stanley opened to them without hesitation. There was a tussle. The priest was not so much laying down his life as throwing it at them. He was shot dead.

Outside, villagers began running to the church. By sunrise, thousands of Tzutuhil stood in silent vigilance in the church plaza.

“It was like their God had died,” noted Raymond Bailey, a U.S. Embassy staff member from Guatemala City. “It was a sight I’ll remember the rest of my life.”

In some ways, their God had died, because the only God they knew was not some erudite notion, awaiting their leisurely consideration. It was a man who had farmed with them, had listened to them and had spoken to them of God.

We live in an age where many reject the church, the disciples of Christ, and speak instead of “being spiritual,” meaning: finding God on one’s own terms. The Tzutuhil people do not live in such an age. Jesus did not either, and Jesus still doesn’t.

It's wonderful to hear the story of a priest with gravitas, one close to the earth and close to the people. May the lord call many such men and women to the priesthood.