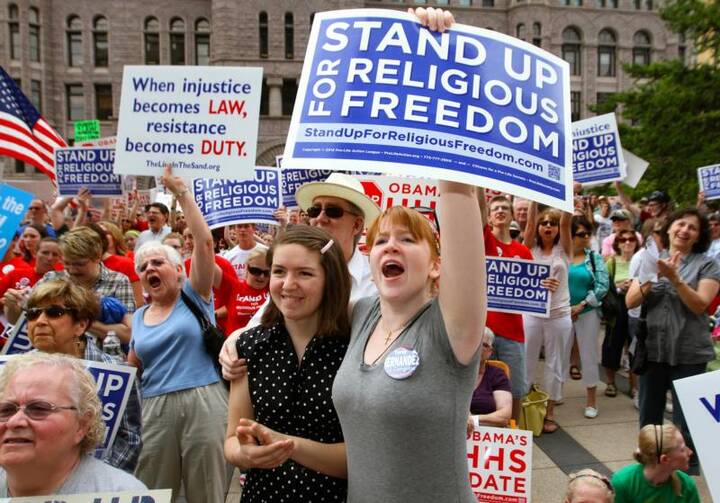 People display signs showing their support for religious freedom during a 2012 rally in downtown Minneapolis. It has been 20 years since the International Religious Freedom Act was passed by Congress and became law. (CNS photo/Dave Hrbacek, The Catholic Spirit)

In launching this year's Fortnight for Freedom, the U.S. Conference of Catholic Bishops is calling for renewed dedication to protecting religious freedom.

"Freedom for Mission" is the theme of the 2017 Fortnight for Freedom, taking place on June 21 to July 4. The 14-day observance of action, education and prayer focused on religious freedom began in 2012, stemming from a 12-page statement released that June by the bishops' Ad Hoc Committee for Religious Liberty titled "Our First, Most Cherished Liberty."

The U.S. bishops recently voted to make the ad hoc committee permanent. It has been chaired since its creation by Baltimore Archbishop William E. Lori.

The archbishop opens the fortnight by celebrating an evening Mass June 21 at the Basilica of the National Shrine of the Assumption of the Blessed Virgin Mary in Baltimore. He will celebrate a special Fortnight Mass July 3 in Orlando, Florida, during the U.S. bishops' Convocation of Catholic Leaders.

Hillary Byrnes, assistant general counsel for the USCCB, works with the bishops on protecting religious liberties from government infringement, which is the focus of the fortnight.

Byrnes said the media tends to hide the fact that religious freedom is an actual issue, leaving people reluctant to talk about threats to that freedom.

"We have been dealing with religious freedom issues for a really long time in our country," Byrnes told Catholic News Service in an interview June 20. "And especially for Catholics, dating back to the 19th-century Blaine amendments, up to the present day, there have been threats from the federal government as well as state and local governments that really restrict our freedom to be able to serve people in our charitable ministries, as well as people trying to live out their Catholic faith or whatever faith they have. Religious freedom isn't just for us as Christians, but it's for everyone."

Blaine amendments are in the constitutions of 37 states. Named for Rep. James Blaine of Maine, the amendments bar public money from going to churches. Blaine tried unsuccessfully in 1875 to have the U.S. Constitution prohibit the use of public funds for "sectarian" schools.

This amendment to the Missouri Constitution figures into a case currently before the U.S. Supreme Court, Trinity Lutheran Church v. Comer. The case involves a Missouri state grant that gives schools and nonprofits recycled tire pieces to use as a safer playground surface. Although Trinity Lutheran received a high score on its application for the grant, the school was denied because of its affiliation with a church. The court's ruling is expected during the Fortnight for Freedom.

"They were denied solely because they were a church, so it's a pretty clear-cut case of discrimination based on religious status," Byrnes told CNS. "We are hoping that the court will rectify that situation and say that there is an equal playing ground that includes people of faith."

Byrnes pointed to other issues threatening religious freedom, including the Health and Human Services contraceptive mandate of 2011 requiring most religious employers to cover contraceptives for employees even if they are morally opposed to such coverage. The Little Sisters of the Poor and many other Catholic entities have fought the mandate in court for several years, but now under the Trump administration, an HHS rule has been proposed to exempt religious employers from the requirement.

She also noted a transgender mandate that took effect on Jan. 1 that redefines "sex" for anti-discrimination purposes to include sexual orientation and gender identity. It requires hospitals and physicians—including Catholic ones—to "provide the hormonal treatments and even the surgeries even if it's contrary to their professional judgment" to patients who want to become a different sex.

The two weeks that make up the Fortnight for Freedom coincide with observances on the liturgical calendar that recall the examples of saints who fought religious persecution and the first martyrs of the Church of Rome.

It opens on the vigil of the feast of Sts. Thomas More and John Fisher, who were martyred for their faith. Both men were associates of Henry VIII, who ordered their execution. June 24 is the feast day of St. John the Baptist, who was beheaded at the request of Herod's stepdaughter. June 29 is the feast of Sts. Peter and Paul, honoring their martyrdom.

Is religious freedom really under threat?
The Editors

In addition to the Fortnight for Freedom observance, the USCCB has a reflection series, "Pray-Reflect-Act," providing daily mediations throughout the fortnight for specific intentions for which the church can unite in prayer. In addition, the USCCB also issued a document on "How to Speak About Religious Freedom."

"Its something that we need to keep in our minds and really pray about, because prayer is really the most powerful thing that we have to try to solve these issues," Byrnes said. "We can educate ourselves, but really prayer is the most important."

Reading the article, it becomes clear that the bishops want to use the law to obtain public funding for church schools, to exempt hospitals and other businesses operated by the Church from laws that apply to all employers, and to permit these businesses to enforce religious rules on patients. It seems to me that it adds up to expanding the rights of the Church at the expense of the rest of us. You already have the right to go to sectarian schools. Nobody makes you use contraception. Nobody is asking you to undergo gender-transformation. This is establishment of a privileged religious status, and an affront to religious freedom.