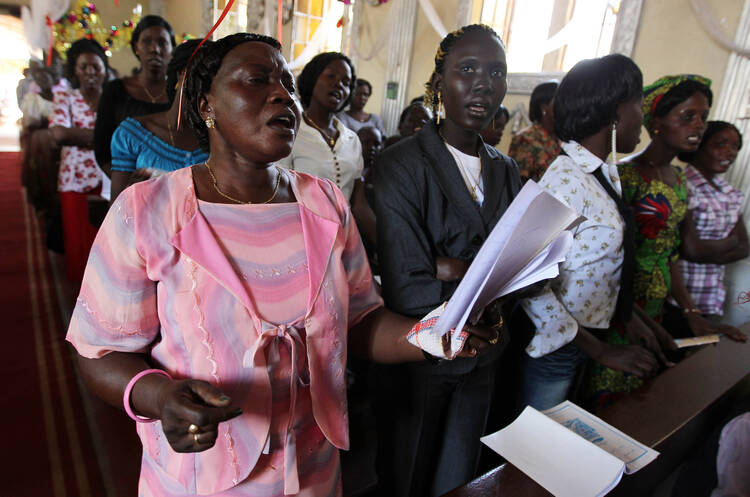 Pope Francis is providing concrete aid to the war-stricken people of South Sudan and is calling on the international community “to make greater and renewed efforts” to find a solution to that devastating conflict that has left half of the country’s population hungry every day, Cardinal Peter Turkson told a Vatican press conference on June 21.

The Holy See has been seeking ways to mediate a solution in this terrible conflict since it first started in 2013, according to the Ghanaian cardinal who was also involved in the peace efforts. But in the absence of a solution, he said Pope Francis has decided to intervene to help the war-stricken, suffering people with concrete projects in the fields of health care, education and agriculture.

The war has “caused a grave humanitarian crisis that has left half of the country’s population, around 7.3 million people, hungry every day."

The war is now spreading across the country and, the cardinal said, “is producing victims” and “has forced one and a half million people to leave their villages” while “death and desperation afflict the population.”

The war has “caused a grave humanitarian crisis that has left half of the country’s population, around 7.3 million people, hungry every day" and “thousands of people are at risk from a cholera epidemic without precedent,” the cardinal stated.

“Massacres and atrocities, systematized and generalized, are being perpetrated against the civilian population for ethnic reasons, women and children are subjected to daily violence and abuse,” he added.

Another speaker at the press conference, Yudith Periera-Rico, R.J.M., associate executive director of the group Solidarity with South Sudan, said the world should know that “a silent genocide is taking place in the country” and the suffering people are asking the world “please don’t forget us.” She urged people across the globe to express their concern by connecting with #SouthSudanWeCare in order to raise public opinion.

Michel Roy, secretary general of Caritas Internationalis, told the press conference that if public opinion could be awakened across the world to the dramatic tragedy and pressure were put on governments then perhaps many of the 193 member states of the United Nations might decide to act.

Sixty percent of the population of this oil-rich country, which gained its independence in July 2011, are Christian; 37 percent are Catholic. Cardinal Turkson recalled that Pope Francis had wanted to visit the country in October (together with the archbishop of Canterbury, Justin Welby) to show his personal closeness to this suffering population, to seek to advance the peace process and to join his voice to that of the local church in saying “no more arms, no more rape, no more death.”

The visit had to be postponed, however, because the conditions were not yet right and so he decided to intervene immediately with projects in three areas: health care, education and agriculture.

Two of the health care projects will provide assistance to two hospitals run by the Comboni missionary sisters at Wau and Nzara in South Sudan. A project in the field of education, managed through the Solidarity with South Sudan association, will provide two-year scholarships to the Solidarity Teacher Training Center at Yambio. The project in the field of agriculture will be managed by Caritas Internationalis and aims to help 2,500 families in the cultivation and raising of livestock in the dioceses of Yei, Tombura-Yambio and Torit, to enable them to be self-sustaining.

We can, and must, defeat famine in Africa
Margot Patterson

“Pope Francis does not forget the unheard and silent victims of this bloody and inhuman conflict, nor does he forget all those persons who are forced to leave their homeland because of abuse of power, injustice and war. He keeps them all in his prayers and in his heart,” Cardinal Turkson stated.

He assured the people in South Sudan that the pope “strongly hopes to be able to make an official visit to the country as soon as possible.”

Correction, June 21: The number of people of South Sudan suffering from hunger is 7.3. million, not half of that number, as originally reported.