Pope Francis will not visit South Sudan in 2017 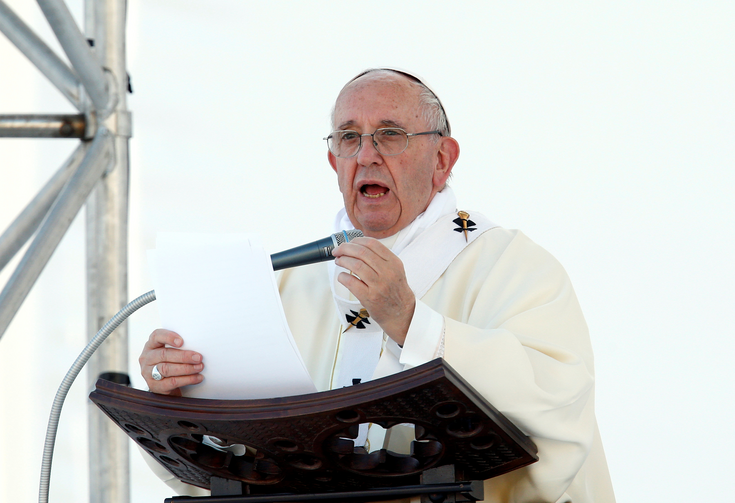 Pope Francis delivers the homily as he celebrates Mass on May 27 during his pastoral visit in Genoa, Italy. (CNS photo/Georgio Perottino Garofalo, Reuters)

Pope Francis will not visit South Sudan in October with Anglican Archbishop Justin Welby of Canterbury as he had hoped, the Vatican spokesman said.

Greg Burke, the spokesman, told reporters on May 30 the trip "was not for this year."

With the civil war worsening and famine spreading, Pope Francis already in March had expressed doubts about the possibility of making the trip. In an interview published March 8 with Germany's Die Zeit newspaper, he said visiting South Sudan would be "important," but he added, "I don't believe that it is possible."

Still, a small team from the Vatican visited Juba in May to study the situation and see if it might be possible even to do something only for a few hours at the Juba airport.

"Vatican security already did their inspection," Archbishop Paulino Lukudu Loro of Juba told the Italian station Radio InBlu. "I'm sorry the pope cannot come. The country certainly will be disappointed by this news."

In October, the Catholic archbishop, Episcopal Archbishop Daniel Deng Bul Yak of South Sudan and Sudan and the Rev. Peter Gai Lual Marrow, moderator of the Presbyterian Church of South Sudan, came to the Vatican to explain the situation in their country and to invite the pope.

They suggested the pope and Archbishop Welby could visit together to bring a message of peace and brotherly love directly to the people and the squabbling members of the government and political parties.

South Sudan became independent from Sudan in 2011 after decades of war. But, just two years after independence, political tensions erupted into violence.

Pope Francis and President Trump meet: what you need to know
The Editors

Visiting an Anglican church in Rome in February, Pope Francis noted how leaders of the different churches were working together for peace and that the South Sudan invitation was an ecumenical one.

"We are thinking about whether it can be done, whether the situation is too difficult down there. But we must do it because they—the three (bishops)—together want peace and they are working together for peace," the pope said.