The once officially atheist China is booming with religion 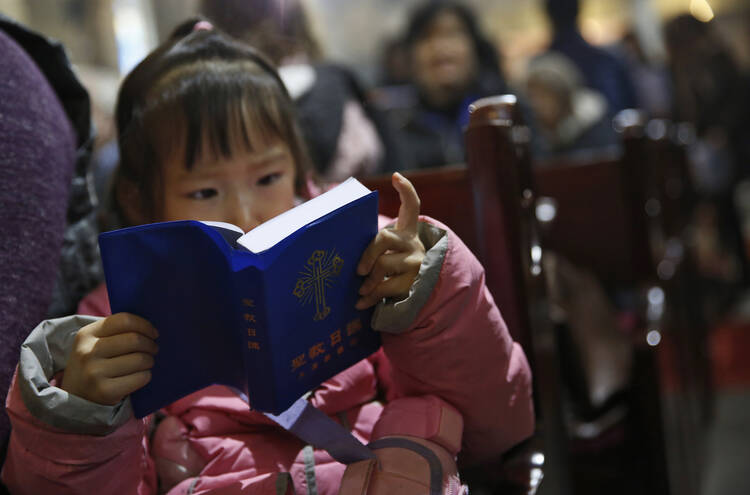 A girl looks at a Bible during Mass in 2016 at a Beijing cathedral. As young people move to cities, Catholic grandparents in rural areas are passing on the faith to their grandchildren. (CNS photo/How Hwee Young, EPA)

When Ian Johnson first went to China as a student three decades ago, he pronounced religion there “dead.”

But Johnson, a Pulitzer Prize-winning American journalist now based in Berlin and Beijing, has witnessed a transformation, one he documents in “The Souls of China: The Return of Religion After Mao,” published in April.

China is experiencing “one of the great religious revivals of our time,” Johnson writes. “Across China, hundreds of temples, mosques and churches open each year, attracting millions of new worshippers. … Faith and values are returning to the center of a national discussion over how to organize Chinese life.

“This is not,” he continues, “the China we used to know.”

No, it is not. Once officially atheist, China has roared with growth since the death of Mao Zedong in 1976. The upheaval of mass migrations from the countryside to the cities has disrupted families and support systems. Many have grown distrustful of the government since the 1989 massacre in Tiananmen Square. Globalization has brought outside influences—despite tight governmental control—through the internet and popular culture.

The result, Johnson said, is a society adrift, confused and looking for mooring.

In the new China, “churches and religious societies provide a sense of community, a sense of belonging, a sense of being in a group of people who share your values,” Johnson said between bites of carrot cake at an outdoor campus cafe before talking to a group at the University of California, Davis.

“Chinese people perceive society to be so corrupt and so chaotic, without any center of gravity or morality,” he said. “Religious associations are refuges from the radical secular society they find themselves in.”

As one person Johnson interviews in the book says: “We thought we were unhappy because we were poor. But now a lot of us aren’t poor anymore, and yet we’re still unhappy. We realize there’s something missing and that’s a spiritual life.”

That has not always been true. At the end of the 19th century, there were 1 million temples in China and religion flavored every aspect of public and private life. Mao destroyed half of the country’s temples. Religion—what was left—went underground.

A 2015 WIN/Gallup poll found China to be the least religious country in the world, with atheists making up 61 percent of the population. Only 7 percent said they were religious.

But, as Johnson writes, Western pollsters often botch their Chinese numbers. Because religion is so highly politicized in China, most Chinese respond “no” when asked if they adhere to one. Instead, when questions focus on religious behaviors—do you attend a church or believe in heaven?—the level of religiosity rises.

A 2005 survey conducted by a Chinese university found that 31 percent of the population—about 300 million people—are religious. Two-thirds of those are Buddhists, Daoists or members of other folk religions, while 40 million people said they are Christian.

In the book, Johnson experiences the ongoing revival firsthand. An Episcopalian, he attends church with Protestants in Chengdu, participates in Daoist ceremonies in Shanxi and travels with Beijing Buddhists to meditate in caves.

Critics have been generally rapturous, citing his reporter’s eye and writer’s patience in illustrating China’s journey from underground “house churches” to open religious revivals in the space of about 35 years.

“I think what Ian conveys is the diversity of religious beliefs that are being revived,” said Jeffrey Wasserstrom, a University of California, Irvine, professor of history who specializes in China and appeared with Johnson at the Davis talk. “He does ethnographic work—getting to know people who practice these beliefs, where an academic would probably just specialize in one of the traditions.”

But the boom has its limits. The Chinese government recognizes only five faiths—Buddhism, Daoism, Islam, Catholicism and Protestantism. And it still bans Falun Gong, the suppression of which Johnson reported on for The Wall Street Journal, coverage that earned him a Pulitzer. There are state-run churches led by clergy in the government’s employ who give government-sanctioned sermons. Other houses of worship are monitored—one of the most chilling segments of Johnson’s book describes a Christmas Eve service with government agents watching from the back.

Still, the recovery from the time of Mao is significant. Johnson likens it to America’s own Great Awakening, the widespread 19th-century revival that led to many new religious movements, including evangelicalism and Mormonism.

Johnson thinks the religious boom in China will continue and predicts Christianity will see the most growth.

“When the Cultural Revolution—a 30-year period—ended, people wondered, ‘Are there any Christians left in China?'” he said. “But what is happening is Christianity, especially Protestantism, exploded underground during the Mao period. There were 1 million. Protestants in 1949 and there are 50 million today. That is huge.”

But Christianity—and any other religion—may only blossom so far. The state will not relinquish its role in controlling religion.

Cardinal Tong: The Vatican and China could be close to a milestone agreement
Gerard O’Connell

“Even though the government is officially atheist, they see themselves as wanting to have a hand in religion. They fear religion,” Johnson said.

“It is a force that is outside of political control. You can try to control it, but if you are religious your allegiance is partly to this world but the allegiance to God is higher and sometimes stronger.”