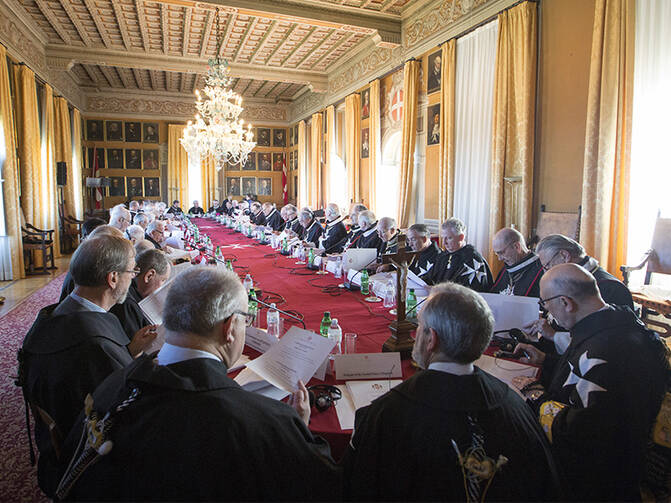 Knights of the Order of Malta gather in a villa in Rome on April 29, 2017, to elect an interim leader to carry out reforms of the ancient chivalric order following a bitter internal clash that promoted the intervention of Pope Francis. (Photo courtesy of the Order of Malta/Remo Casilli)

The nearly thousand-year-old Order of Malta is bracing for major reforms in the wake of the election of an Italian nobleman to lead the Catholic chivalric order that carries out charitable works around the globe.

The election of Giacomo Dalla Torre del Tempio di Sanguinetto came in a closed-door vote in a Roman villa on Saturday, April 29 and followed a bitter internal clash that led Pope Francis to oust the previous leader.

That dispute—ostensibly sparked by disagreements over the inadvertent distribution of contraceptives through an aid program in Myanmar—set up a proxy battle between traditionalists opposed to Francis and reformers who want to see the church take a more flexible approach.

It also proved to be a classic Vatican soap opera that featured out-sized personalities while casting a harsh light on a quietly influential church charity — one which is also a bastion of clerical and aristocratic privilege.

Dalla Torre—who is known as Fra’ Giacomo—was elected as “lieutenant” of the Grand Master, a temporary position with a one-year term instead of the long-standing custom in which a Grand Master held the job for life.

The 72-year-old Roman was chosen from a list of 12 candidates by the order’s council in a secret ballot held at its 14th century villa on a hill in Rome that has a stunning view of the dome of St. Peter’s Basilica across the Tiber River.

Dalla Torre—who is known as Fra’ Giacomo—was elected as “lieutenant” of the Grand Master, a temporary position with a one-year term.

Some 56 “professed knights” from European nobility—men who are not clerics but take vows of poverty, chastity and obedience to the pope—were eligible to vote.

Dalla Torre replaces the former Grand Master, Matthew Festing, who resigned from his position in January after open conflict with the Holy See over Festing’s removal of a senior deputy, Albrecht von Boeselager.

Festing and U.S. Cardinal Raymond Burke, the group’s chaplain and a frequent critic of the pope, had accused von Boeselager of violating church rules by turning a blind eye to the use of condoms in aid projects in the developing world when he was in a previous post.

But the pope and his allies thought von Boeselager, who is German, had been railroaded and directly intervened in the governance of an order that jealously guards its own sovereignty.

Festing, who is British, resigned at the pope’s behest and Francis sidelined Burke by naming an archbishop to oversee the order through the period of reform.

The papal delegate, Archbishop Angelo Becciu, had ordered Festing not to come to Rome for the election to avoid a scene and prevent any chance that he would be re-elected.

But Festing defied the Vatican order and came anyway, though his camp apparently lost the vote.

“Fra Giacomo Dalla Torre del Tempio di Sanguinetto was this morning elected lieutenant of the Grand Master of the Sovereign Order of Malta,” the order said in a statement.

It said that Francis, who was returning from a brief but closely-watched visit to Egypt, was “informed of the election by letter.”

An expert in art and archeology, Dalla Torre taught at Rome’s Pontifical Urban University for many years and published several articles on medieval art.

He previously served as the order’s lieutenant for an interim period after the death of a previous Grand Master, Fra’ Andrew Bertie, in 2008.

He has deep ties to the Vatican and reportedly used to care for one of the cats that Cardinal Joseph Ratzinger—a longtime Vatican chief who was elected Pope Benedict XVI in 2005—took under his wing.

The order said one of Dalla Torre’s top priorities would be reforming the order.

“The recent crisis has shown some weaknesses in the checks and balances in governance: the reform will take this into consideration,” the order said in its statement. “The reform will also focus on strengthening the Order’s spiritual life and to increase the number of its Professed members.”

Founded in Jerusalem in 1048 to protect pilgrims traveling to the Holy Land, the Knights of Malta is a Catholic charity that operates in 120 countries.

It is a sovereign entity with 13,000 members and 80,000 volunteers and runs refugee camps, drug treatment centers, disaster relief programs and clinics around the world.

But only the professed knights can hold positions of authority; the Vatican would like the order to, among other things, broaden the pool of eligible future grand masters, perhaps including commoners for the first time.

Reformers would also like the order, which has seen steady growth in its numbers in recent years, to be more transparent and less insular in its governance.

Reformers would also like the order, which has seen steady growth in its numbers in recent years, to be more transparent and less insular in its governance.

Wearing the order’s traditional black robes with a white Maltese cross, the 56 electors celebrated Mass at the Church of St. Mary of the Priory inside the villa’s spectacular gardens early Saturday before marching solemnly to the villa next door to cast their ballot.

Despite the pageantry—and drama—some of the electors could be heard chatting and laughing from the villa balcony before the vote began.

The pope had met with senior officials from the order at the Vatican late Wednesday and in another unusual move, Francis also sent a letter to the order offering “a word of encouragement and some reflections” ahead of the vote.

He also sought to explain his unexpected intervention.

“I believe, in fulfillment of the charge entrusted to me as Supreme Pastor of the Church, that I have responsibility for all Institutes of Consecrated life, and therefore also for your distinguished and ancient Order,” the pope said in the letter published on the order’s website.

“You are embarking on an important path of spiritual renewal in a spirit of fidelity to your tradition and with vigilance to the signs of the times and needs of the world,” the pope said.

In another blow to Burke, who technically remains the papal envoy to the order, the new leader will be sworn in by Becciu, under the pope’s orders, at the Church of St. Mary of the Priory at the order’s historical seat on Sunday.

The organization has unusual diplomatic status, including bilateral relations with 106 countries and permanent observer status at the United Nations.