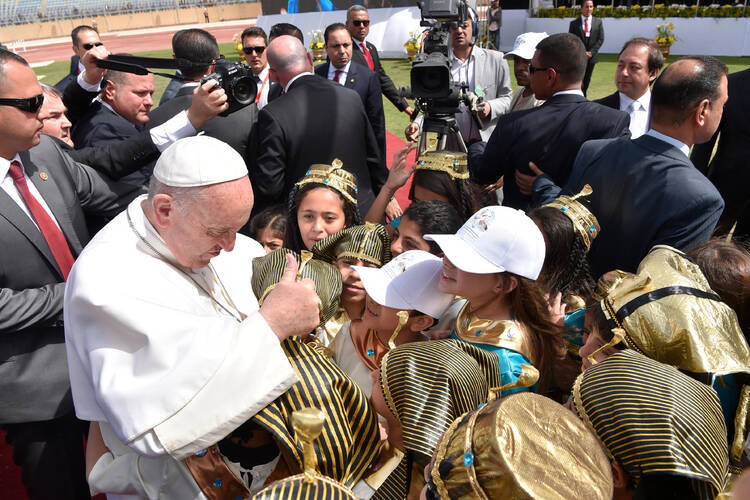 Pope Francis greets children dressed as pharaohs and in traditional dress as he arrives to celebrate Mass at the Air Defense Stadium in Cairo April 29. (CNS photo/L'Osservatore Romano)

Pope Francis scored a triple win on his two-day visit to Egypt: a win for peace, a win for Christian-Muslim relations and a win for ecumenism.

These wins can be symbolized by three images: his refusal to use a bulletproof car; his embrace of Sheikh Ahmed al-Tayeb, the grand imam of Al Azhar; and his placing his hand on the blood-spattered wall of the martyrs at the church of St. Peter in Cairo, where 29 people were killed in a terrorist attack last December.

The humble, open-windowed car he traveled in was a small victory for peace, offering hope on the political and economic front for Egyptians. Francis normally uses a small car, but given the major security concerns in Cairo, especially after the bombing of two Coptic churches on Palm Sunday, everyone realized that he was taking a big risk by refusing a bulletproof vehicle that would have isolated him from the Egyptian people.

The authorities took most extraordinary measures to protect him, as was especially evident when he celebrated Mass at the stadium of the Egyptian air-force, 12 miles outside the city in a desert zone this Saturday morning. Tanks and armored cars surrounded the stadium. Helicopters flew overhead. Soldiers armed to the teeth were everywhere; many were accompanied by dogs. The stadium was surrounded by barbed wire and the 15,000 people who attended the celebration were carefully selected and could not bring in mobile phones. Egyptian authorities were taking no chances.

“Francis sent a strong message to Daesh by coming to the heart of places where their attacks are taking place.”

But Francis took the risk, trusting in God. His decision transmitted a message of hope on the political front to all Egyptians, Christians and Muslims alike, who are well aware that their country is today a target for ISIS terrorists and is engaged in a battle against terrorism.

“Francis sent a strong message to Daesh,” Father Oliver Borg Olivier told America, using a slang term for ISIS intended to diminish the group’s Islamic authenticity, “by coming to the heart of places where their attacks are taking place.” Father Olivier is a Jesuit from Malta who has worked in the Middle East for the past 43 years—most of those years in Cairo.

The pope’s visit, and his refusal to use a high-security vehicle, also offered hope on the economic front to Egyptians. The economy is in crisis. Last September $1 equaled 8 Egyptian pounds; today the rate is almost $1 to 20 pounds. One of the main reasons for the crisis is that the tourist industry on which Egypt thrived has been hit hard because of the fear created by terrorist attacks.

“Francis sent a different message to the world by his visit. He shows our country is peaceful, it is secure to come here. We are very happy at this,” Ahmed Mussa, a Muslim and journalist from Al-Ahram told America at the Mass.

While many would like a society where civil liberties are more fully respected, several people told me they prefer the army to rule because they believed the alternative to a quasi-military rule was a revival of the Muslim Brotherhood, funded by Saudi Arabia and Qatar, which would make life far worse for the majority of Egyptians. For this reason they were happy with Francis’ visit with President Abdel Fattah el-Sisi, despite international concerns with the human rights situation in Egypt since he took office. 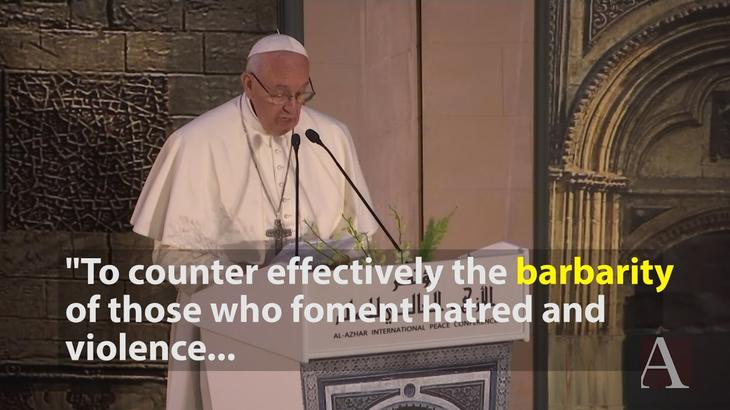 Pope Francis scored a second win by embracing the grand imam of Al Azhar twice in public at the conference for peace on April 28. It is said that a picture is worth a thousand words. The picture of their embrace was carried by all Egyptian media and by media in other countries in the region.

When the two first met in the Vatican last November, it was the first time ever that a grand imam had visited a pope. At that time Francis had said, “The meeting is the message.”

That was also true yesterday, but in a different sense when Francis agreed to participate in a meeting organized entirely by Muslims. There was something more too this time as they both made clear to the world that no one can justify killing or acts of terrorism in the name of God. Their presence together on the stage at Al Azhar University for a peace conference was an important step in removing moral legitimacy from ISIS and Islamic fundamentalists in the eyes of Muslims in the Middle East.

Pope Francis is already greatly respected and popular in the eyes of ordinary people on the “Arab street” in Egypt and other Middle Eastern countries, several Egyptians told me. His frequent references to Muslims as “brothers,” his concern for the Syrian immigrants and his decision to take Syrian Muslim refugees back to the Vatican with him after visiting a refugee camp in Lesbos, Greece, in April 2016 have endeared him to everyday Muslims.

His embrace of the grand imam, whom he called “my brother,” made a big impression too. Sources say the gesture has strengthened Christian-Muslim relations in the region. “His dialogue and good relationship with the imam is very important as it sends a message to the world that religions are not at war, that Muslim and Christians can live and work together in peace,” Father Paul Giaras, a Coptic priest from Sharm El Sheikh told America in the stadium on April 29.

“The visit of the pope and his meeting with the imam is a great event for Egypt because it sends the world a message of peace and love,” Amira Hesham, a Muslim who is a reporter for Al-Ahram for Coptic affairs, said.

Francis scored his third win in Egypt, this time in the ecumenical field, when at the end of his first day in Cairo he visited Pope Tawadros and afterward prayed with him at the Wall of the Martyrs of St. Peter’s church, near the Coptic pope’s residence and St. Mark’s cathedral. When Tawadros showed him the blood-splattered wall, the result of the killing of 29 Coptic faithful (whose photos are now on the wall) in a terrorist attack claimed by ISIS last December, Pope Francis was deeply moved. He stepped forward and touched the glass plate that now protects the blood stains, and then blessed himself and placed a lighted candle before it.

That was a mighty gesture of solidarity with this suffering church, just as his visit to them was meant to offer consolation and hope. He left Coptic Christians in no doubt that they are not alone, that they have a loyal and faithful friend in the Bishop of Rome, who is ever close to them, not only through his regular contact with Tawadros, but also by his very presence among them. This is “ecumenism in action.”

His visit with Tawadros also brought a significant step forward in terms of Christian unity when he and the Coptic pope signed a joint declaration recognizing the legitimacy of each church’s baptism, something that has not been the case before. In this context, Father Giaras said, “Francis meeting with Pope Tawadros was also very important for the Catholic-Orthodox dialogue.”

Pope Francis has always insisted that the Christian faith needs to be something “concrete.” These three wins are exactly the result of his effort to be “concrete” in relations with other Christians, Muslims and communities across the world.

This has to be the least convincing piece of propaganda I have ever seen. Pope Francis takes a great risk travelling in an ordinary car - but with tanks, armoured cars, helicopters and troops galore protecting him.
Pope Francis shows it's safe for those desperately needed tourists to return - provided they arrange a similarly massive escort.
And Pope Francis warmly embraces the Chief Imam at Al-Ahzar and calls him his brother. I assume this is a different Chief Imam from the Chief Imam who insisted a few months ago that apostates from Islam should be put to death. So any converts from Islam to Catholicism won't be put to death now as a special concession to His Holiness?