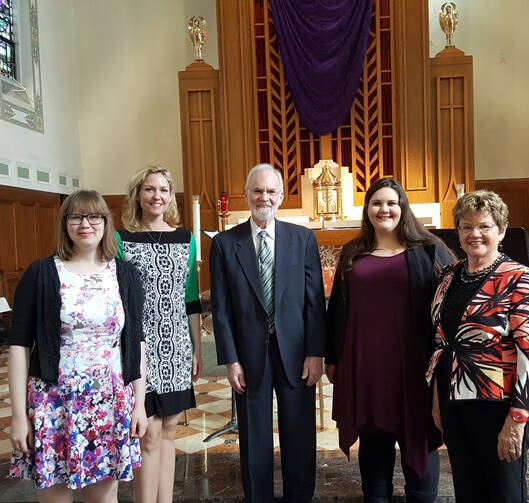 Edward Lally has loved traditional liturgical music ever since he attended Quigley Preparatory Seminary in Chicago in the 1960s. He did not continue on to the priesthood, but his passion for early church music never dimmed. Today Mr. Lally is music director at Divine Providence Catholic Church in the southwest Chicago suburb of Westchester. He is also a one-man ambassador for Gregorian chant, eager to introduce the uninitiated to ethereal beauty.

Gregorian chant is an ancient musical form characterized by sung melody unaccompanied by musical instruments. Chants developed along with the earliest versions of the Mass. Initially, the music was handed down from memory, cantor to cantor. By the ninth century, musicians had devised a system of musical shorthand called neumes, a grouping of notes to symbolize the melody.

Mr. Lally is in the process of translating the original Latin texts of every Gregorian chant into English. “I am careful about orthodoxy, and I have studied the music intently,” he says. He has also replaced the traditional neumes with modern musical notation to make it easier for today’s choir members to sing the chants and to arrive at what he calls “the truth of the music.”

His parish is one of the few places you can hear chant as it was used in early Masses. For instance, during the processional, before the entrance hymn is sung at Divine Providence, a schola cantorum, as liturgical singers are formally known, will chant a traditional Introit, the entrance psalm with its antiphon. Mr. Lally’s translation of the Latin Introit on Holy Thursday, for instance, began “Our glory must not be in anything except the cross of our Lord, Jesus Christ …”

Mr. Lally also uses traditional chant for the communion antiphon each week. Occasionally, the cantor will intone a long melodic line for the gospel Alleluia, with the congregation responding, and the schola extending the final syllable in what Mr. Lally calls “a burst of joy.”

“You’re expressing something in pure melody. It can express a text better that way than if you had orchestration, harmonies or accompaniment,” he says.

Chant, he adds, “is so old, it’s new. When I have to play some of the [modern] music people are familiar with in church, it pales in comparison.” That is certainly true in his assessment of much of contemporary church music. “I had to play a lot of junk,” he says of his years as a substitute music director at several Chicago-area parishes before joining Divine Providence.

Reaction at the various parishes where he has worked has varied. Mr. Lally says some priests do not want Latin used at all in the liturgy. Many parishioners, though, say they find the music, appealingly contemplative. “If they don’t know what it is, they tend to respond well,” he jokes.

Lately Mr. Lally has taken his show on the road. Recently, at St. Edward’s Church on Chicago’s Northwest Side, a four-member female schola he has been working with sang through traditional chants of the Mass, from the Introit and Kyrie to the Agnus Dei and the Communion Antiphon. Mr. Lally doesn’t like calling these events “concerts” or “performances,” preferring instead to refer to them as “encounters.” He called the St. Edward’s concert “A Chant Encounter.”

Local colleges have also invited Mr. Lally. At a humanities class in one community college, a student found the recordings he played so relaxing, he fell asleep. “That wouldn’t happen if the singers were there live. There would be so much energy,” Mr. Lally says.

Learned on the street: Chicago student finds a way out of college homelessness
Judith Valente

The name “Gregorian” refers to Pope Gregory I, known as Gregory the Great, who died in 604 A.D. The pope collected and organized texts of plainchant in use during his lifetime and then founded the first singing schola cantorum in Rome to train singers for the church. But cantors still passed on the music orally in Gregory’s day. Gregory did not invent musical notation (that fell to the Benedictine monk Guido of Arezzo), though a famous painting of Gregory shows a bird singing in his ear as he writes down a musical line.

The emperor Charlemagne popularized the use of Gregorian chant throughout the church, two centuries after Gregory’s death.

Mr. Lally says he is not trying to turn back the liturgical clock by re-introducing this traditional music into the Sunday liturgy. Nor is he advocating a return to the Latin Mass. “There were very good reasons to reform the liturgy,” he says. “People today participate, they understand what’s going on. I wouldn’t want to go back.”

What he does want to restore to a prominent place is the beauty of this ancient music. He acknowledges that Gregorian chant does not allow for much participatory singing from the people in the pews, as modern hymns do. But, he says, “listening can be a participatory act too.”

Vatican II called for the full, conscious, and active participation of all present, while Mr. Lally wants to make beautiful music rather than assist the congregation in praying communally. 'He acknowledges that Gregorian chant does not allow for much participatory singing from the people in the pews, . . . . But, he says, “listening can be a participatory act too.” ' That is, he wants the assembly to be his audience, participating in his concerts by listening.

Apparently Lally and author Valente have chosen to ignore that chant was originally sung by the entire congregation of the monasteries, lay and ordained, not just by some specialists. Chant, Gregorian or otherwise, is excellent for congregational use. Lally and others should be building up participation by the congregation, rather than performing for them.

There is a recurring problem demonstrated by Lally here. Artists of all types seek ways to promote their arts in the liturgy instead of seeking to understand the way liturgy is supposed to work and helping it to work better, be more communal and less clerical, with more participation and less observation. The "noble simplicity" advocated by the council fathers applies to the less elaborate, monophonic versions of chant which can be learned by congregations as much as it does to the other crafts used in the liturgy which in other places can aspire to artistry. During the liturgy it is time to serve the congregation not display one's accomplishments.

Good luck to Mr. Lally in promoting encounters with Gregorian Chant outside of Mass where people should be singing together, communally, not listening to others.

I loved this article and congratulate Edward Lally. In my part-time experience working as an organist/choir director, my success, or failure in sharing great music depended on the pastor. Fortunately, for 23 of my 40 years I had a pastor who knew how to spell Palestrina and loved chant. Most priests only knew the names Haugen and Hass. Leading people to great art and music is a difficult challenge, but for those who succeed, the rewards are immeasurable.