Holy Thursday: In mercy, poverty is more abundant than wealth 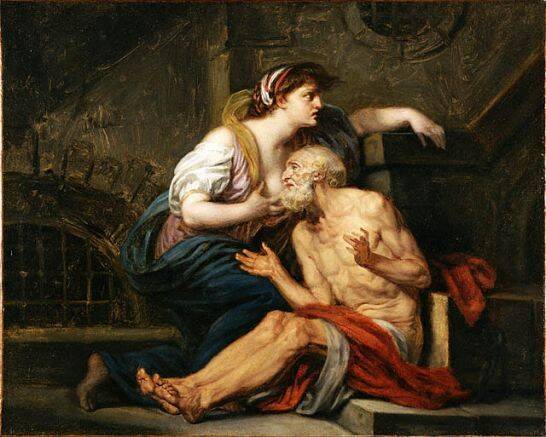 She’s only 19 when Steinbeck’s story opens. She is also newly-wed and carrying her husband Connie’s baby as the family leaves the dust bowl of Oklahoma for the promise of California in The Grapes of Wrath (1939).

Seeing the family dog killed by a car, just as the Joads are ready to depart, Rose of Sharon’s eyes grow wide with worry for her unborn child. She asks her husband:

Rose of Sharon’s world is small. Like the rest of us, she is limited by her education, her opportunities and her fears. In Oklahoma City she sees a man wearing a light suit, with white shoes and a flat straw hat. She and Connie get the giggles.

When her grandfather dies, only a short distance from the homestead, Rose of Sharon’s worry is again for her unborn child.

The burden, and the blessing, of youth is the inability to see how dire life can be. Unrealistic hopes are more easily kindled in the young. So it is that, in the midst of the Great Depression and after the foreclosure of the farm, Rose of Sharon and Connie dream of the white house they will one day own and the movies they will go to see, just as soon as Connie takes some night classes to work in radio or to repair tractors.

But in California and still out of work, Connie abandons Rose of Sharon and her family.

Rose of Sharon moved dizzily out of the tent. “Where’s Connie?” she asked irritably. “I ain’t seen Connie for a long time. Where’d he go?”
“I ain’t seen him,” said Ma. “If I see ‘im. I’ll tell ‘im you want ‘im.”“I ain’t feelin’ good.” said Rose of Sharon. “Connie shouln’ of left me.”
Ma looked up to the girl’s swollen face. “You been a cryin’” she said.
The tears started freshly in Rose of Sharon’s eyes.
Ma went on firmly, “You feeling sorry for yaself.”
The girl started to go back in the tent. She tried to avoid Ma’s stern eyes, but they compelled her and she came slowly toward the fire. “He shoudn’ of went away,“ she said, but the tears were gone.
“You got to work.” Ma said. “Set in the tent an’ you’ll get feelin’ sorry about yaself. I ain’t had time to take you in han’. I will now. You take this here knife an’ get to them potatoes.

Caught outside in California’s winter rains, Rose of Sharon takes fever and births a stillborn child. Her childhood dreams of motherhood and a white house in California are at an end, but so, too, are her repressive fears: that seeing dead animals or people, or watching folks sinfully dance might harm her child. No, the real evil in The Grapes of Wrath is something inflicted on the poor by the greed of the rich.

Knowing that hatred stalked his life, on the night before he died, Jesus gathered his apostles and shared his table with them. How the memory of that night must have marked their lives! There would be fellowship and food with the Lord after the resurrection, but the meal that created the nascent church came the night before he died. It was then, in his abasement and indigence, that Jesus proclaimed the resurgence of Israel’s covenant with her ever faithful Lord. He broke bread and spoke of his body, ready to be broken. He shared a chalice with them, sealing a new covenant in his blood about to be shed.

On this night, when he has nothing left to give, Christ gives all. He gives his very self.

It makes such sense that the risen Christ, the triumphant and glorified Christ, should establish this new dispensation. But it is the abandoned, the hunted, the impoverished, the soon-to-be-damned Christ who does so. On this night, when he has nothing left to give, he gives all. He gives his very self.

For you know the gracious act of our Lord Jesus Christ, that for your sake he became poor although he was rich, so that by his poverty you might become rich (2 Cor 8:9).

The early Christians thought that the pelican was an apt image of their Christ because of their belief that the bird fed its young from its own flesh. The table of the Lord had taught them that in mercy, poverty is more abundant than wealth, which withers in its ripeness.

The table of the Lord teaches that in mercy, poverty is more abundant than wealth, which withers in its ripeness.

At the close of The Grapes of Wrath, the Joad family seeks shelter in a barn, where they find a man dying of starvation. He has given all of his food to his young son. His time among the poor banished children of Eve is closing.

Suddenly the boy cried, “He’s dyin’, I tell you! He’s starv-in’ to death, I tell you.”
Hush,” said Ma. She looked at Pa and Uncle John standing helplessly gazing at the sick man. She looked at Rose of Sharon’s eyes, and then came back to them. And the two women looked deep into each other. The girl’s breath came short and gasping.
She said, “Yes.”
Rose of Sharon whispered, “Will—will you all—go out?” The rain whisked lightly on the roof.

A once silly, now wise, Rose of Sharon, an impoverished and now empowered woman, feeds a dying man from her own flesh. The mystery of what Christ did the night before he died has not vanished from the earth. It is still quite visible to those who are poor. In mercy, poverty is more abundant than wealth.

Good Friday: What ‘The Grapes of Wrath’ tells us about why we sin
Terrance Klein

The Gospel’s Easter promise: Love will win out over sin and death.
Terrance Klein

For a minute, Rose of Sharon sat still, in the whispering barn. Then she hoisted her tired body up and drew the comfort about her. She moved slowly to the corner and stood looking down at the wasted face, into the wide, frightened eyes. Then slowly she lay down beside him. He shook his head slowly from side to side. Rose of Sharon loosened one side of the blanket and bared her breast. “You got to,” she said. “There.” Her hand moved behind his head and supported it. Her fingers moved gently in his hair. She looked up and across the barn and her lips came together and smiled mysteriously.

The Rev. Terrance Klein is a priest serving in the Diocese of Dodge City and author of Vanity Faith.