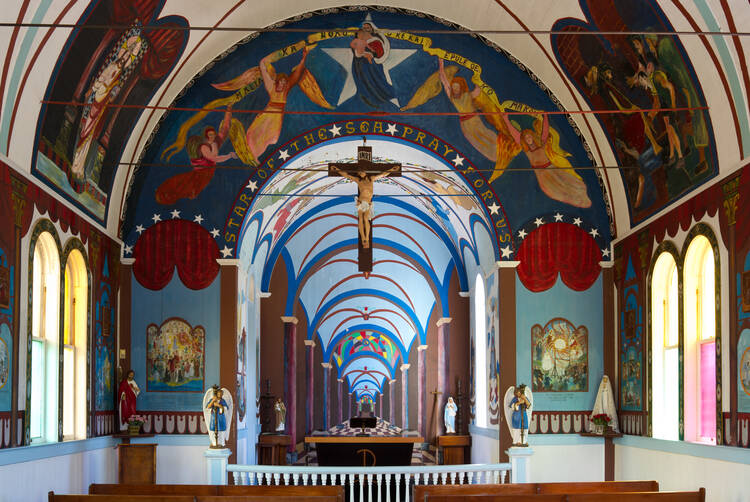 Hawaii abides in many Americans’ imaginations as that idyllic land we dream of visiting, a paradise of gorgeous beaches, sweet drinks and soft melodies, a land where we escape from the grind of our lives.

But for the 1.5 million people who live on its six islands, Hawaii is not a vacation fantasyland but home, with its own set of struggles and blessings.

For the 1.5 million people who live on its six islands, Hawaii is not a vacation fantasyland but home.

Bishop Larry Silva has been pastor of the church in Hawaii since 2005. The first native-born bishop of the islands, his Portuguese ancestors having worked in Hawaii’s sugarcane fields, he has witnessed the many graces and issues present in America’s only Polynesian state.

For instance: While a neverending stream of visitors flock to Hawaii’s many beachside resorts and hotel, a November 2016 study from the Department of Housing and Urban Development reports that in the last 10 years Hawaii has had the largest percentage growth in chronically homeless people in the entire nation, at 113.6 percent. It has also seen the largest growth in homeless veterans. And almost half of the homeless in Hawaii live outside even the shelter system.

Bishop Silva says about the only good thing about being homeless in Hawaii is that “nobody is going to die from the elements. No one here is going to freeze to death. But it’s not the way people should live.”

The diocese has put considerable effort into addressing the problem, including drawing together volunteers to renovate public housing units local government had left vacant because they were not up to grade—a project that put almost 100 units back into circulation.

And Bishop Silva wants to do more. “I’ve been trying to think of how to have a discussion on what are the causes of all this; why is our economy such that it causes so many people to be homeless or in substandard housing, with two or three families living together?”

Living in Hawaii also grows ever-more expensive, with gasoline, electricity and housing prices all among the highest in the nation. “Many times young people who grew up on Hawaii cannot afford to live here as adults,” Bishop Silva says. “When they start their own families, they have to move away to Las Vegas, California or other places because the cost of living is just too high here.”

“Many times young people who grew up on Hawaii cannot afford to live here as adults,” Bishop Silva says.

Still, unlike many other places in the United States, the church in Hawaii is growing. The state has 66 parishes and nearly 300,000 Catholics. “Our challenge,” the bishop says, “is to transform a little plantation-size parish that now has to deal with thousands of people.” The cost of land makes that a challenge.

Most of the diocese’s 110 priests also come from somewhere other than the islands, many lent from mainland dioceses for three to five years, making continuity a challenge. Parishioners, Silva explains, “can get a little frustrated because they don’t have someone that’s going to see them through a pastoral plan to the end.”

But this reality has also encouraged innovation. “To ameliorate our situation,” says Bishop Silva, “we have asked every parish to do a pastoral plan—and not just the pastor sitting at his desk but involving the people. And then, if there is a change in pastor, I can take that plan and say to him, ‘This is what you need to work on.’

“Of course, they’ll bring their own unique gifts to the job,” Bishop Silva notes. “But this is what the parish came up with, and so this is the plan that they need to work on.” It is a strategy that many Catholics on the mainland might also appreciate.

Bishop Silva finds that the church in Hawaii faces the same coolness (if not hostility) toward religion to be found elsewhere. Assisted suicide legislation recently passed the state Senate by an overwhelming majority—22-3. (Hawaii is, in fact, the only state in the union in which every state senator is a Democrat. Democrats also hold 45 out of 51 seats in the House of Representatives and the governorship.) A house committee has tabled the legislation, meaning it may not be considered this session. But it remains a serious issue.

And though it is as far from Washington, D.C., as one can get in the United States without a sled, Hawaii also faces the same political instability that the mainland struggles with. But Bishop Silva finds a silver lining in these troubled times. “I don’t think people were very involved in the political process before,” he says. “They were kind of letting things happen that maybe shouldn’t have happened without saying anything.

“Now the lines are drawn much more clearly, and people are speaking up more and getting involved more, which is a good thing.”

In his own diocese, he is heartened by the 10,000 Catholics who signed petitions against physician-assisted suicide; he encourages all to be active in their faith. “We’ve bought into this strict separation of church and state in many ways; as long as everything is fine in the parish and we’re getting along and doing wonderful things in the parish, we don’t really look beyond it.

“But we who are Christians also have a responsibility to be a leaven and an influence in the [public] square. And that isn’t really the responsibility of the bishop or the clergy; maybe I have my place to write a pastoral letter, which I’ve done, but they should be doing the lobbying, talking to legislators and so on.”

Over 11 plus years as bishop, Bishop Silva has grown to appreciate the attitude of the Hawaiian people. “There is what we call the ‘Aloha spirit,’ a gentler spirit. People try to get along with one another. There’s a great ethnic diversity here, and for the most part, it works well. There is a lot of interaction.”

Archbishop Gomez: We are the answer that God provides to those who suffer
Jim McDermott

He praises Hawaiians’ great capacity for laughing at themselves. “Unlike on the mainland, where political correctness seems to rule much of everything, there are lots of ethnic jokes here, and people don’t get upset about them. They laugh at themselves, and at each other. And I think there’s something healthy about that, that you can laugh at yourself and allow others to laugh at you, too.”

Asked what gifts the Hawaiian church might have to offer the broader church and country, Bishop Silva returns to these ideas. “The Aloha Spirit—a spirit that accepts people, that includes people of other races, of other cultures—is a gift that perhaps we can use to inspire others to not take yourself so seriously.

“And to realize when all is said and done, we all live on an island, and we need to get along with each other.”