Rod Dreher: Common ground is less important than "being faithful" for Christians 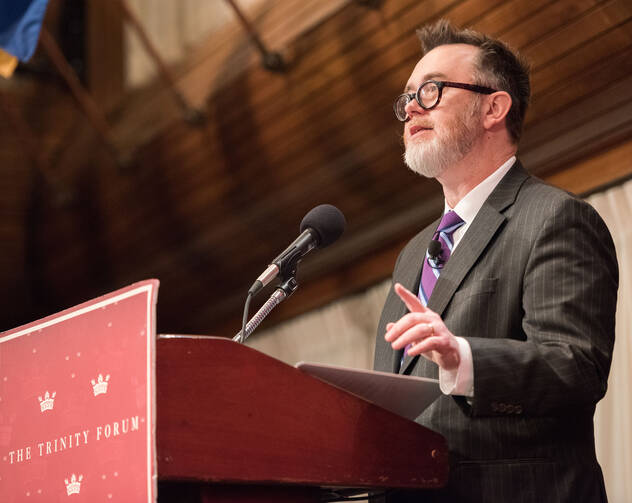 Rod Dreher, senior editor for The American Conservative, has spent years writing about faith and culture in the public square. Mr. Dreher spoke with America by phone on March 7, 2017. The interview has been condensed and edited for clarity. A longer version can be found at thejesuitpost.org.

In our conversation you said, “Being a faithful Christian is not the same thing as being a faithful G.O.P. or Democrat.” How can people challenge themselves to live by their faith rather than by their political ideology?

The wonderful thing about Roman Catholicism is that it doesn’t track one-to-one with American political divisions, and for me that was one of the liberating things about being a Catholic. It’s good to step outside your ideological puzzle and realize that the Gospel is so much bigger than your political commitments, and sometimes being faithful to the Gospel means standing up to your political allies. I have progressive friends who do that on the issue of life, and I have conservative friends who do that on the issue of the environment or economics. But that’s liberating, frankly. When you don’t feel captive to a political party, when you realize that the church is not the Republican or Democratic party at prayer, that opens up some really amazing possibilities for your own growth as a neighbor and as a citizen and as a Christian.

Many people bemoan the lack of common ground today. How is the Benedict Option going to promote more common ground, when you seem to be pulling away from what common ground there might be in the public sphere?

That criticism is on point, and I am less concerned with finding common ground than I am with being faithful. That doesn’t preclude finding common ground with others outside of my faith tradition, and I look for that. But that is not the thing that I am most concerned about. I believe that we have the culture war because people on both the left and the right believe in things that are incommensurable—we can’t agree on what is the good.

I am less concerned with finding common ground than I am with being faithful.

We have to find some way to live together without being at each other’s throats. But having lost a common story, it is difficult to find a common ground in reality. So we end up in a situation—Alasdair MacIntyre described this quite well—where the only common ethic is emotivism, that is, the only thing that many of us seem to believe is true is our feelings. People have lost the ability to distinguish between an argument and an assertion.

In your comments on Emma Green’s review of your book at The Atlantic, you note that “Quite often secular or progressive people want to know why conservative Christians are so concerned about LGBT issues.” But you counter with the claim that, “This is not the fight that most conservative Christians I know (including me!) want to have. But it’s the fight that has been brought to us.” Can you explain?

After Obergefell [v. Hodges], we are, constitutionally speaking, seen on the same level as racists, and increasingly in culture this is also true. We’re not being allowed to hold on to our views, and to be faithful to our views, no matter how tolerant and irenic we are. We’re being challenged and punished for holding them.

After Obergefell [v. Hodges], we are, constitutionally speaking, seen on the same level as racists, and increasingly in culture this is also true.

This is where the fight is being brought to us. Insofar as progressive Christians or people outside the church demand that Christians give up what we know to be true from the Bible and our traditions about homosexuality and sexuality in general, then we are going to have to fight, and we are going to have to take a stand, even if it means we lose, and we lose certain privileges, because to do otherwise is to burn a pinch of incense at the statue of Caesar.

What Rod Dreher gets right in "The Benedict Option" is just as important as what he gets wrong.
Patrick Gilger, S.J.

It should give us hope that even when our own efforts in this lifetime seem to fail, we can’t lose heart. We just have to be faithful to what God has given us and leave the rest up to God.

I learned that we don’t have to win the victory in this lifetime, and it can’t be won in this lifetime. All we have to do is to do the very best we can where we are and let God do the rest.

More: US Politics / LGBT / US Church

Bill McCormick, S.J., is a scholastic in philosophy studies at Fordham University. He is an editor of The Jesuit Post.

The Benedictines, of course, have an Oblate program for men and women, Catholic or not: two weekends a year at an abbey with the monks. And praying the hours at home, usually abbreviated versions in morning and evening. Benedictine priests also say mass at nearby churches and some work in education and other outside work. Benedictine nuns also work in and outside the monastery.