Cardinal O’Malley: Evangelization will have ‘no effect’ if the church doesn’t protect children 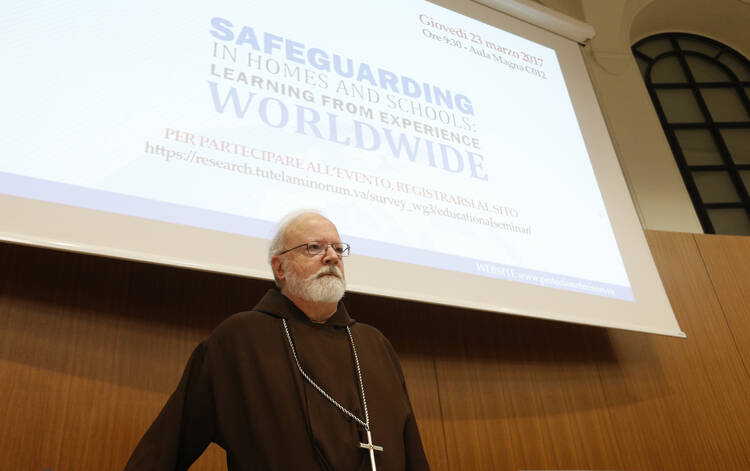 U.S. Cardinal Sean P. O'Malley, president of the Pontifical Commission for the Protection of Minors, is pictured during a seminar on safeguarding children at the Pontifical Gregorian University in Rome March 23. (CNS photo/Paul Haring)

Opening today’s seminar at the Gregorian University in Rome on “Safeguarding children in homes and schools worldwide,” Cardinal Seán O’Malley, president of the Pontifical Commission for the Protection of Minors, told participants: “Let there be no doubts, no other topic is more important for the life of the church. If the church is not committed to child protection, our efforts at evangelization will be to no effect; we will lose the trust of our people and gain the opprobrium of the world.” Indeed, he said, “there is simply no justification in our day for failures to enact concrete safeguarding standards for our children, young men and women, and vulnerable adults.”

The importance of the seminar was underlined by the presence of six cardinals (including the secretary of state), several bishops, other Vatican officials, ambassadors, rectors of pontifical universities and colleges, authorities from the Italian state police and the Vatican gendarme, as well as professionals in the field from all continents and many countries.

Cardinal O'Malley: ‘There is simply no justification in our day for failures to enact concrete safeguarding standards for our children.’

The Boston cardinal, who enjoys great credibility in this field, repeated what he told the Consistory of Cardinals in February 2015, namely, that abuse “is not a Catholic problem or even a clerical problem, it is a human problem,” but “when abuse is perpetrated by a priest the damage is even more profound.” He recalled that Pope Francis gave the P.C.P.M. the task of “promoting responsibility in local churches” and assisting them through an exchange of best practices and programs of education, training and developing adequate responses to sexual abuse.

Today’s seminar, organized by the abuse commission’s working group, headed by Australia’s Kathleen McCormack, and Center for Child Protection at the Gregorian University, headed by Hans Zollner, S.J., brought together experts from Argentina, Australia, Colombia, Mexico and Italy who presented a stark picture of the abuse happening in their countries and the multiple efforts being made by the church, N.G.O.s and state bodies to combat it.

Monica Yerena Suaréz from Mexico reported that in her country there are 600,000 cases of sexual abuse each year. Nine out of 10 of the victims are women, four out of 10 are children under the age of 15 and 50 percent of the abuse takes place in the home of the victim. Sixty percent of the abuse is done by a family member or someone known to the victim. A Salesian priest from Colombia, Father Wilfredo Grajales Rosas, spoke of his organization’s work, including with street children in Bogotá, and of the abuse that occurs in the home or for commercial purposes through human trafficking.

Juan Ignacio Fuentes from Argentina said that since new legislation was introduced in his country between 2010 and 2015, the number of people reporting abuse has doubled as victims see hope of redress. He claimed that because military dictatorships ruled many South American countries for decades, people grew accustomed to violence, so there is a need today to change that mentality, something the church is seeking to do.

The chief executive officer of the Truth, Justice and Healing Council of the church in Australia, Francis Sullivan, delivered a powerful address on the dramatic situation in his country, where between 1950 and 2010 some 7 percent of all Catholic priests in the country had allegations of abuse made against them. While there is abuse elsewhere, too, he said, “this is a church problem, and the fact that it happened in the Catholic Church says so much about the corruption in the church,” he stated.

‘Let’s learn from the victims, from whom the church has so much to learn.’

“Child sexual abuse has broken the heart of the church in Australia,” he said. Not only is there “brand damage” to the church, there is also a high level of distrust in the bishops: 50 percent of those who attend church weekly consider them “untrustworthy” as do 70 percent of those who identify themselves as Catholic. He believes the only way forward is the path of humility: “Let’s be humble, let’s experience the vulnerability” and “let’s learn from the victims, from whom the church has so much to learn.” The bishops can only regain credibility by action, not by words, he said.

In this work of safeguarding children, Mr. Sullivan said, education is vitally important. The church has 9,389 schools and educational institutions with 3.6 million children. Twenty-one percent of all Australian children are educated in Catholic schools. “Most of the abuse occurred in schools and orphanages,” he said, but, significantly, “most of the data peaked in the 1970s” which shows that most priest-abusers were educated in the pre-Vatican II seminaries. It took some 31 years before the allegations of abuse were reported, however, because of the status of the church in Australia and the unwillingness of authorities to believe the children. A drop off of the abuse started in the 1970s and was “almost negligible” by 2010, Mr. Sullivan said. There are still some cases today because, notwithstanding new safeguards, “when people want to abuse children, they find ways to do so.”

Giovanni Ippolito, a member of the Italian state police, endorsed this last point and highlighted the way children are being led into abuse today through the internet. This topic will be the focus of a major international congress at the Gregorian university next October, Father Zollner said.

‘Pope Francis is totally committed to zero tolerance in this whole area. His commitment is beyond doubt.’

Cardinal Kevin Farrell, prefect of the Dicastery for Laity, the Family and Life, told America he considered it “extremely important that people from all over the world can gather to share the information that they have acquired over the last 20, 30 years on this question of the abuse of children.” Cardinal Farrell believes “the experiences of one country or one ethnic group can help another.” He said: “These kinds of activities are essential to making the church aware and helping to find solutions and to educate people because as Cardinal O’Malley said, this is not just a problem of the churches, it’s a societal problem, but it is of course much worse when a man of the clergy abuses the children. We have to realize that children are vulnerable, and we need to help them.”

Cardinal Marc Ouellet, prefect of the Congregation for Bishops, told America that he agreed with Cardinal O’Malley who said, “if we don’t protect children our evangelization has no effect.” The Canadian cardinal confirmed that his congregation now screens every candidate to be bishop on this precise subject: “We have a specific question not only on the quality of the candidates but also on their capacity to address this problem, to be vigilant.”

Criticisms of the Vatican’s sexual abuse commission need to be taken seriously, not written off as clichés
The Editors

Likewise, the Brazilian cardinal João Braz de Aviz, prefect of the Congregation for Institutes of Consecrated Life and Societies of Apostolic Life, told America that his congregation carries out an advanced investigation “in every case of a religious who is a candidate to be bishop.” Moreover, he said, his congregation now has the specific competence to “investigate immediately” every allegation against a religious superior or bishop, “because time is of the essence to prevent.” The result is then communicated to the pope or to the Congregation for the Doctrine of the Faith.

Surprisingly, the prefect of the C.D.F., Cardinal Gerhard Müller, was absent, though two officials of his office who deal with abuse cases were in attendance.

Asked by America about recent suggestions in some media that the pope may be taking a softer line on the perpetrators of abuse, Cardinal O’Malley said: “Pope Francis is totally committed to zero tolerance in this whole area. His commitment is beyond doubt.”

The recent Dublin Report of Clerical Sexual Abuse of Children is another damaging report where Archbishops and Auxiliary Bishops have been accused of moving priests around from parish to parish when they knew that these priest repeatedly committed child sexual abuse.

Another damaging blow to the Church was when Marie Collins, a prominent survivor of childhood sexual abuse, stepped down as a member of the Papal Commission of Clerical Sexual Abuse, because Vatican officials refused to implement basic protections for children the Commission recommended with Pope Francis's blessing.

'Actions', most importantly bringing bishops to justice, and 'not words', remains a major problem plaguing our Church.