Should Catholics be feeling the March Madness? 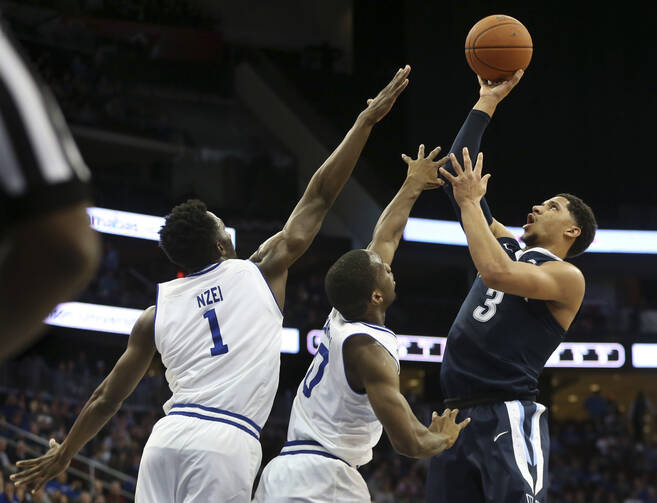 First, it is important to recognize that Catholics have been playing sports for many centuries. In the medieval period, laypeople regularly played sports on feast days—times of leisure and celebration that made up as much as one third of the calendar year—and on Sundays. The humanists of the Renaissance and early Jesuits were the first to educate primarily laypeople and included sports in their schools. When large numbers of Catholics started coming to the United States, they made sure that the schools they started included time and space for students to play sports as a matter of course. By the late 19th century, Catholics began to view sporting competitions between Catholic and public high schools and universities as a way to show that they were as strong, smart and capable as members of the dominant Protestant majority. And they were remarkably successful at this endeavor.

The emergence of a religious culture that so easily incorporated play and sports was made possible by several factors. These included the Christian understanding of the material world as good and of the human person as a unity of body and soul; the view that virtue was associated with moderation; and an understanding of faith and culture that tended toward the acceptance of non-Christian customs and cultural traditions that were good in themselves (or at least not objectionable on moral grounds). St. Paul himself had provided a biblical precedent for engagement with sports when he made use of experiences from athletics to explain the dynamics of the Christian life in his letters to Greeks in places like Corinth.

At the heart of papal teaching about sports is that athletics should serve the human person in his or her integral development. In order to understand whether they are doing this or not, it is crucial to pay attention to the experiences of persons playing sports. Dynamics that have shaped the world we live in direct our attention away from such experiences, however. The Puritans associated godliness with one’s work or calling but tended to regard play and sports with suspicion. It is not by chance that Americans became more comfortable with sports in the course of the 20th century when they became profitable or related in a meaningful way with work and business. Our universities today tend to regard big-time sports as a means to an end as well. And the stakes are high. The National Collegiate Athletic Association is being paid $10.8 billion by CBS Sports and Turner for the right to broadcast the March Madness tournament from 2011 to 2024, and has recently signed an eight-year extension that will pay them $1.1 billion per year through 2032.

In addition, a Cartesian mind-body dualism continues to shape how universities approach athletics. Within a dualistic perspective, bodily activities such as sport are not considered to be related to meaning-making for our students or expected to provide them with insight into their lives. This is why we typically do not ask most university students to think about their embodied experiences in sport in the classroom.

From a Catholic perspective, theological reflection about sport at any level needs to start with the experiences of the participants, because this is the only way we will know if sport is serving their integral development or not. Such reflection will also help us to begin to get an understanding of the internal goods associated with sport and to think about the ways these can be related to education. The problem with not paying attention to the experiences of players is that money and prestige become the driving forces, which dictate the choices of athletic departments at too many Division I universities in the United States. It is important to remember that St. Paul, who opened the door to Christian engagement with sports, also wrote that the “love of money is the root of all evil.”

The best sports experience I have is watching two grandsons play basketball in our community program. They are in grades 1 and 3. I also enjoy our hometown Cleveland Cavs, but I have more smiles with the grandsons. It's all about trying to succeed and learning skills. Everyone on the roster plays. Money $$$$ is not a factor. Truth is, money $$$ and sports reputation is as important at Catholic Universities as it is a State Universities.