Charlie Brown and his football: a story of Christian hope 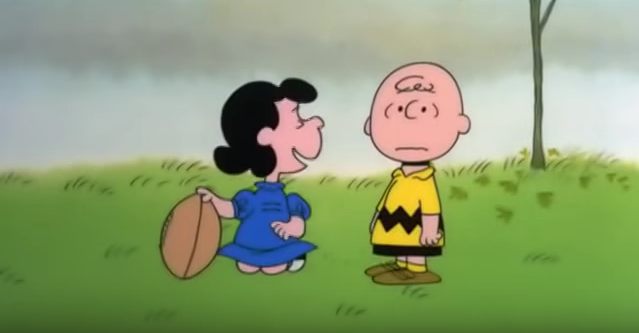 Charlie Brown comes running, but, at the last moment, Lucy pulls back the football, explaining to the prostrate kicker: “I was afraid your shoes might be dirty, Charlie Brown. I don’t want anyone with dirty shoes kicking my new football.”

He tells her: “Don’t you ever do that again! Do you want to kill me? This time, hold it tight!” She does, so tightly, he kicks a ball, which doesn’t move, and tumbles onto his back.

He laments: “I’m not going to get up. I’m going to lie here for the rest of the day.”

Lucy would continue some variant of the football snatch in almost every subsequent year of the strip, all the way to 1999. The same would happen nine times in animation. Drawing the strip for the last time, Charles Schultz said that he realized, sadly, that Charlie Brown would never kick that football, but, he also thought, having him succeed would have been a disservice to the character.

Why is that? Perhaps because Charlie Brown is something of an everyman, and trying to kick that football reveals who he is. Depending on your perspective, either he will not learn from the past or he refuses to give up on the future. For the Christian, it’s the latter, which is what makes Charlie Brown something of a Christ-figure: He doesn’t close in upon himself; he doesn’t give up on others; he lives in hope.

Consider the commandment God gives through Moses: “Be holy, for I, the Lord your God am holy” (Lev 19:2). And then, “You shall love your neighbor as yourself” (Lev 19:18). We are told to be like God, which is to love like God. Humans become most truly themselves, most truly human, when we strive to imitate God, when we love and give, when we love to give, when we give love.

Jesus rejects all of the petty reasoning that would make us comfortable closing in upon ourselves. Love and goodness are always diffusive. They don’t draw back. That is the mark of their divine origin. It is the vision of what it means to be human, revealed in Christ. “So be perfect, just as your heavenly Father is perfect” (Mt 5:48).

One could put all of this into another key. As God is the deepest reality there is, we humans have only one choice. We either choose to be like God or we choose to be…not at all. We call the confirmation of the first choice, heaven. The second choice leads to the nothingness that we name hell.

The Freedom of the Father’s Children
Michael Simone

Art doesn't change the world. So why escape to the movies?
Terrance Klein

The final football gag appeared in the strip on Oct. 24, 1999. At the last moment, Lucy is called away, but she asks her brother Rerun to play the trick on Charlie Brown for her. Back in the house, she asks him: “What happened? Did you pull the ball away? Did he kick it? What happened?”

It is, after all, the great question that life poses. Am I a Charlie Brown or a Lucy? Do I love and give as God does, as Christ did? Or do I, at the last moment, pull back into myself?

Terrance W. Klein is a priest serving in the Diocese of Dodge City and author of the Vanity Faith.

Just as we sneer at the Pharisee apropos the tax collector in the temple, Fr. Klein perpetuates the trope that Lucy is a malevolent actor in Charlie Brown's luckless life. I would remind Fr. Klein that both Pharisee and tax collector were equally welcome in the temple, and that Lucy taught young Brown an important life lesson. His misfortune to not learn after 9 unfortunate experiences, no Talmudic scholar he. Put that in your next sermon, but give due credit.

Wow John, you really worked hard to find a dark lining in a silver cloud.
The Pharisee's sin in the parable you mention is his self righteousness.
It's hard to believe that Lucy's motive in pulling the football back each time is to teach Charlie a worthwhile lesson. Especially since Charlie states "You nearly killed me." Yet this has no bearing on Lucy's future actions with the football.

With respect to the Pharisee and Publican, I have this image of the CEO of a money-center bank on one hand, payday lender on the other. We project our own prejudices upon the Baker Scholar from HBS, former Eagle Scout with his Club membership, well groomed kids and vacation retreat on LBI. The payday lender, on the other hand went to our less prestigious alma mater, wears brown suits and probably ignores his wife or has a little something going on the side. What do you suppose the payday lender said to himself when he saw the perfumed and superbly coifed CEO?

Both men came into the temple seeking to be in the presence of the most holy of holies, and they came bearing the baggage which men typically carry.