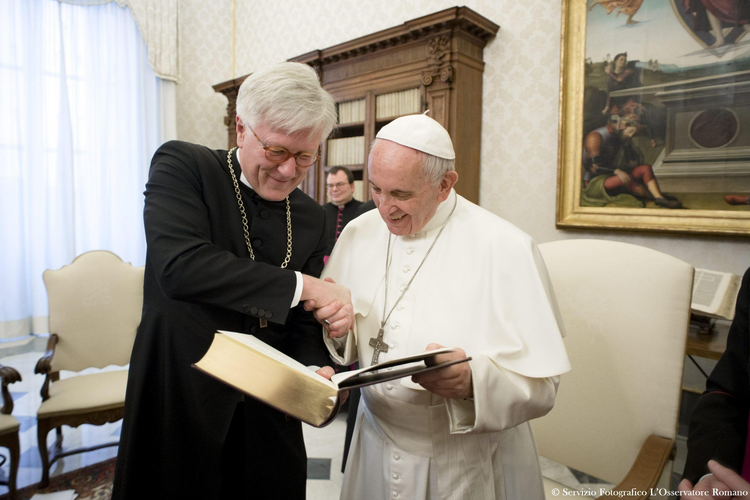 Pope Francis and Bishop Heinrich Bedford-Strohm, chair of the Council of the Evangelical Church in Germany, meet at the Vatican Feb. 6. (CNS photo/L'Osservatore Romano)

For the first time since the Reformation, the Evangelical Church in Germany, which represents the vast majority of Protestants in that country, has invited the pope to visit their homeland, the nation where the Reformation began. An ecumenical delegation from Germany visited Pope Francis in the Vatican on Feb. 6 as part of the commemoration of the 500th anniversary of that event.

“Pope Francis, you have struck a new chord of goodness and mercy for all people” and “as sisters and brothers in Christ we are grateful for the clear orientation you give,” Bishop Heinrich Bedford-Strohm, the chairperson of the Council of the Evangelical Church (Evangelische Kirche in Deutschland, abbreviated E.K.D.) in Germany told the pope before issuing the invitation.

Cardinal Reinhard Marx, president of the German Catholic Bishops’ Conference, accompanied the delegation. He underlined the historical significance of this invitation and expressed the fervent hope that the pope could respond to it.

Pope Francis has already participated in a joint Catholic-Lutheran commemoration of the Reformation in Lund, Sweden, in October last year, but this invitation is even more significant.

"It is sometimes a painful reality in families: couples who share children, grandchildren and friends are divided at the Lord's table."

Though he gave no clear answer during the audience, it is possible that Pope Francis will accept. He knows Germany, speaks German and is aware of the importance of the invitation.

Greeting the German delegation in his private library, Francis sought to give new impetus to the effort toward Christian unity. He encouraged evangelicals and Catholics, when considering an ecumenical initiative, to ask themselves: “Can we share it with our brothers and sisters in Christ? Can we do another stretch of the road together?

“We have the same baptism: We must walk together, without growing tired,” Francis said. There is no going back on the road to unity he assured the delegation; Catholics and evangelicals must “continue to witness together to the Gospel and to continue on the road to full unity.”

He described the “differences” that still exist between the churches on questions of faith and morals as “challenges” on the road to the visible unity that the faithful want. “Spouses that belong to different confessions” feel especially “the pain” of division, he said, alluding to the problem of families not being able to participate together in the Eucharist.

He encouraged Catholics and evangelicals to work “to overcome the existing obstacles” by persevering with “insistent prayer” and “every [other] effort,” including “intensifying the theological dialogue and reinforcing collaboration between us.”

Bishop Bedford-Strohm told the pope, "It is sometimes a painful reality in families: couples who share children, grandchildren and friends are divided at the Lord's table."

He recognized that progress has been made “in the spirit of reconciliation,” adding that the churches are working together “to seek the way forward to an even greater Eucharist fellowship.”

He said the issue has been raised in the various dialogues with the Vatican. Cardinal Marx confirmed this effort at a press conference in Rome with the German evangelical leaders that followed the meeting with the pope. He said both sides are working together “to figure out if we can reach a common line.”

Pope Francis hailed the fact that Catholics and evangelicals are commemorating the historic events of the Reformation together “in order to put, once again, Christ at the center of their relations.” He recalled that deep down the church reformers were “animated and restless” about how “to indicate the road to Christ.” He said that should be at the heart of Catholic and evangelical efforts today as they move forward on the road to unity.

Pope Francis welcomed a joint evangelical-Catholic initiative in Germany to hold a ceremony of penance and reconciliation in March because “to heal memory, to witness to Christ” is an ecumenical task.

At the press conference, Annette Kurschus of the evangelical leadership highlighted the importance of “reconciled diversity” and emphasized that the ecumenical visit to Rome—“the global city of Catholicism”—on the 500th anniversary of the Reforma tion also has “significance” for the Protestant world on the journey to unity.

The Evangelical Church in Germany is a federation of Lutheran, Reformed (Calvinist) and United Protestant regional churches and denominations in Germany, with some 24 million members. The federation’s Bishop Bedford-Strohm, in greeting Pope Francis said, “Our churches feel a special responsibility to develop ecumenism further, since the divisions started with us in Germany.”

The E.K.D. seeks “a deeper dialogue” with the Catholic Church “on baptism and its significance for the next ecumenical steps” and wishes “to follow a new approach to ensure the dialogue does not stagnate,” he added.

Both the pope and the bishop highlighted the importance of Catholics and evangelicals giving common witness to Christ in a world marked by violence and polarization. Francis said “the urgent call of Jesus to unity” calls members of both churches to act together “when we experience grave lacerations and new forms of exclusion and marginalization.” Here “our responsibility is great,” he said.

Bishop Bedford-Strohm agreed, adding, “Where mercy and compassion are denied, the ‘social sin’ threatens human life together.” He noted that “some now aspire to wall in our humanity. A new populism in different countries glorifies its supporters’ own nation and excludes large groups of people.”

He highlighted, too, the plight of refugees and migrants—an issue that is close to the pope’s heart. He said that “in 2017 the Christian churches should raise their voices together worldwide in order to encourage our countries to show solidarity with refugees from terror and war and to distribute the burdens as broadly as possible.”

My father was Protestant and my mother Roman Catholic.
On Sundays I went to Church with my father and then Mass with my
Mother.

One of my Dad's brother was a Revivalist Preacher and I spent the Summer of my 12th year traveling throughout the Midwest "Saving Souls
for Jesus".

I would be quite happy if Protestants and Catholics find a way to allow
inter-communion.

What I don't understand, and call me naive, is why the Vatican is not
working as hard as it can for Intercommunion between the
Orthodox and Catholics.

If the Pope has to get down on his knees and apologise for the
Sack of Constantinople in 1204 AD and for the failure to support
the Byzantine Empire in the decades before the Ottoman seizure
of Constantinople, then let him do so.