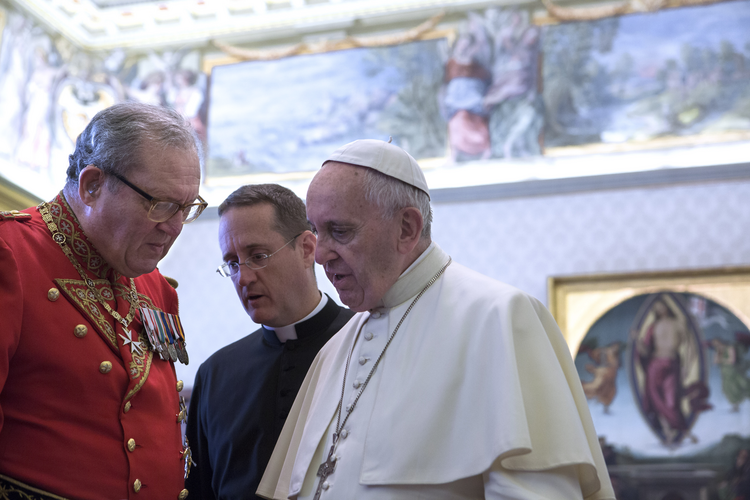 Pope Francis talks with Fra Matthew Festing, grand master of the Sovereign Military Order of Malta, during a private audience with members of the order at the Vatican in this June 23, 2016, file photo. (CNS photo/Maria Grazia Picciarella, pool)

The public dispute between the Holy See and the Sovereign Order of Malta has ended in a way apparently acceptable to both sides. Since much has been written already about this, I will only examine the role played by the principal actors in the dispute: Pope Francis; the grand master, Fra’ Matthew Festing; the grand chancellor, Albrecht Freiherr von Boeselager; and the Cardinal-patron of the order, Raymond Burke.

To begin with, it is important to understand that the Order of Malta, which was founded in Jerusalem around 1048 to witness to the faith and give assistance to the poor and sick, has a dual characteristic: It is a lay religious order of the Catholic Church and has a unique sovereign status as a subject of international law.

As a lay religious order, it has 13,500 members—70 percent men, the knights; 30 percent women, the dames. Fifty-five knights have taken religious vows of poverty, chastity and obedience and are in the top leadership positions. The order has, moreover, 80,000 staff and volunteers as well as 25,000 doctors, nurses and paramedics who provide health care and humanitarian assistance to people in 120 countries.

As a religious order, the order falls directly under the Holy See and the authority of the pope, but as a juridical entity that is neutral, impartial and apolitical it retains a unique status and enjoys many privileges of a nation state, even though its territory consists of a palace and a villa in Rome. It issues its own passports and has diplomatic relations with 106 states, including the Holy See, and with multilateral entities.

This dual characteristic can be likened to “two sides of the same coin,” the order’s reinstated grand chancellor, Mr. Boeselager, said at a press conference in Rome on Feb. 2. That fact explains why many have difficulty in grasping the delicate nature of the Holy See’s intervention when the crisis escalated in an unexpected way last December.

It is worth underlining here that Pope Francis did not take the initiative to intervene in the order’s affairs. He was asked to do so in a private audience on Nov. 10 that had been requested by Cardinal Burke, whom he appointed as patron of the order two years earlier.

Informed Vatican sources, who asked not to be identified, said the American cardinal brought two problems to the pope’s attention that he considered serious in terms of faithfulness to church teaching: the first related to the distribution of condoms, the other to the influence of Freemasons in the order. He wanted the pope to intervene, but Pope Francis asked him to put in writing what he was advocating.

Several days later, the same sources said, Cardinal Burke sent a letter to Francis outlining the line of action that he strongly recommended. This letter has not been made public.

On Dec. 1, Pope Francis replied in a letter that a source who had seen it described as “diplomatic,” urging Cardinal Burke to resolve the problems in the order through dialogue. Five days later, it became clear that dialogue was not the cardinal’s preferred path when the grand master dismissed Mr. Boeselager, allegedly because during his term as grand hospitaller, the order’s aid group, Malteser International, distributed condoms in Myanmar to combat H.I.V./AIDS. The grand chancellor denied that this was done with his knowledge and said the distribution was ended once it became known.

In light of the grand master’s decision, the question arises: What exactly did Cardinal Burke tell Mr. Festing (and others) after his audience and exchange of letters with the pope? Instead of beginning the dialogue recommended by the pope, he appears to have indicated that Francis wanted Mr. Boeselager removed from office. The grand master dismissed him, in the presence of the cardinal, after Mr. Boeselager challenged the legitimacy of the demand and refused to resign. The order’s chief and the cardinal let it be known that Mr. Boeselager was removed from office at the pope’s behest.

The Vatican flatly denied this latter assertion in letters to the order from Cardinal Pietro Parolin, the secretary of state, on Dec. 21. The cardinal, who is the pope’s right hand man, emphasized that Francis had called for dialogue and had not asked for anyone’s dismissal.

Events took a downward turn on Jan. 10 when the grand master publicly rejected the Vatican investigation.

On Dec. 22, as the situation continued to fester, Pope Francis decided to set up a commission of five persons headed by Archbishop Silvano Tomasi, an experienced Vatican diplomat, to investigate what had led to the grand chancellor’s dismissal. The commission included a top canon lawyer and three members of the Order of Malta.

Events took a downward turn on Jan. 10 when the grand master publicly rejected the Vatican investigation as interference in the internal affairs of a sovereign state and said the order would not cooperate with it. The situation became even more explosive on Jan 16 when the U.K.’s The Tablet reported that Mr. Festing sought to discredit the papal commission by alleging in a letter that three of its members may have had conflicts of interest because of their links to a fund in Geneva. The Vatican rapidly rejected the allegation and reaffirmed its confidence in the commission.

Commenting on these events at the press conference in Rome, Mr. Boeselager claimed that the grand master had been “badly counseled.” Although he did not say by whom, many in Rome believe Cardinal Burke was among those Mr. Boeselager was alluding to.

The papal commission completed its work rapidly and handed its report to the Holy See. The text has not been published, but sources say it confirmed the illegal nature of the grand chancellor’s dismissal and highlighted the need for “spiritual renewal” of the order and to address issues relating to finances, moral conduct and the relation of members to associations not in harmony with Catholic teaching.

As tensions remained high between the order and the Holy See, Pope Francis invited the grand master for a face-to-face meeting on Jan. 24, during which he asked him to resign. Fra’ Matthew obeyed and immediately wrote his letter of resignation.

Responding to a question at the press conference, the grand chancellor explained that while the order’s constitution does include a provision for the removal of the grand master, it would not have been applicable in this situation. In other words, if the pope had not asked Mr. Festing to resign, he could not otherwise have been removed.

The day after the resignation, Cardinal Parolin, sent a letter to the order in which he declared that all the acts of the grand master after Dec. 6, 2016, were to be considered null and void. He announced, moreover, that the pope would appoint his delegate to the order.

The appointment of a special delegate raises the question of what will happen to Cardinal Burke. He is still cardinal-patron of the order but no longer the pope’s sole interlocutor with the order.

By way of conclusion to a sad affair that lasted two months, the order’s governing body, the Sovereign Council, accepted the grand master’s resignation on Jan. 28, revoked the disciplinary actions against Mr. Boeselager and reinstated him as grand chancellor. The election of the new grand master, or an interim leader, will take place within three months.

At the press conference, Mr. Boeselager acknowledged that the public dispute with the Vatican had profoundly disturbed members of the Order of Malta worldwide and resulted in a loss of funds from donors. “People decided not to help us anymore because they thought we were fighting against the pope, which is not true,” he said.

Then, speaking on behalf of the government of the order, he set out to reassure its supporters, emphasizing “the order’s loyalty to the Holy Father” and confirming its “willingness to collaborate with the [Holy See’s] special delegate.”

He thanked Pope Francis for his guidance “that helped end the government crises” and observed that “in all his decisions the pontiff showed respect and regard for the Order of Malta, while at the same time acknowledging in all his actions, the sovereignty of the order.”

Interestingly, Mr. Boeselager explained that the reason for the Vatican's concern was not related to the Order of Malta’s historical status as a sovereign entity but to the fact that “the order needs to work in a trustful relation with the Holy Father because without this trustful relation the order cannot function."

Pope Francis’ concern was to re-establish this trust, he said. Some progress toward that goal appears to have been made.

Another puff piece clearing Francis of any wrongdoing. America has become the Pope's PR machine, no criticism allowed. Meanwhile Francis has installed his own man in Malta, Archbishop Angelo Becciu, to keep an eye on things. Also, posters are up all over Rome decrying Francis' bullying nature.

You do understand that one of the two--Cardinal Burke or the Holy Father himself--is lying regarding what was conveyed to Festing? You also understand, n'est-ce pas? that it is a much more serious thing to accuse the Successor to Peter of lying than it is to accuse a cardinal? If you actually believe that this pope is capable of lying about a matter such as this, you are suggesting that his papacy is illegitimate because of malfeasance. I think you had better be prepared to make good on such accusations, lest the Vatican find a way to take canonical action against you, like I have recently suggested it should, against Damien Thompson. Your own and his accusations are serious, libelous, likely to cause "scandal" in the minds of the faithful, and therefore, perhaps, requiring excommunication.