Why you should have pity on the Roman Missal translators

Why you should have pity on the Roman Missal translators 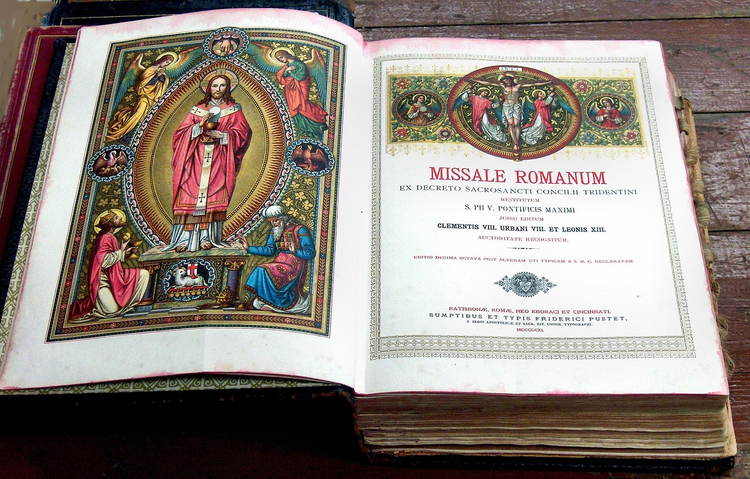 Pity the poor translators! Their task is always arduous—and at times downright perilous. Their work often falls prey to the critiques of Monday night quarterbacks (like the present writer). Occasionally they can even be the objects of veiled threats made modo Italiano: “Traduttore è traditore!” (“The translator is a traitor!”) And we all know the unhappy fate of traitors.

So the news of yet another Vatican document on liturgical translation can fill the translational guild with acute foreboding. Caught between the partisans of “dynamic equivalence” and the proponents of “formal equivalence,” they may be forgiven if they throw up their hands and invoke a pox on Montagues and Capulets alike.

Still, faithful laborers in the Lord’s vineyard that they are, they will undoubtedly put their shoulder to the wheel and recharge their computers yet again. And so, to the other gratuitous advice proffered them, one may add the following.

The first English translation of the Sacramentary, published after the reforms of Vatican II, sought to be intelligible to a 20th-century audience. Thus the syntax labored to be direct and even colloquial. But, too often, to the sensibilities of this celebrant, it fell flat. It sounded not direct, but pedestrian. In addition, the theology of the prayers chanted, or more often mumbled, tended to be reductionistic, seemingly catering to the biases of a therapeutic culture. And so, after 40 odd years of wandering through what felt like dry, weary land, one yearned for wellsprings of living water. Instead what appeared was merely a mirage, a mild “dewfall.”

In the new Sacramentary’s effort to be exact and correct, the sonorous and complex Latin often became a muddled, interminable English paragraph. The translators seemed oblivious to the fact that the Lord, in his goodness, also created semi-colons [;] and periods [.]. Thankfully, the theology became duly elevated; but the syntax, alas, sounded dull and stilted. Thus let this mantra be engraved on the minds and hearts of those heroic enough to put their hand once more to the plow: “Be direct, but not flat; elevated, but not stilted.” And the Lord be with your spirit!

But let us not pass over in silence those who exercise the ministry of episkope in the community, since they are to be assigned a more prominent collegial role. It is well enough to follow the current fashion and insist fervently that “unity does not entail uniformity.” Of course, the two-millennial tradition of a plurality of liturgical rites within the Church Catholic amply demonstrates the point.

More pressing, however, is to discern between authentic plurality within the one apostolic faith and a promiscuous pluralism that compromises that faith. And such discernment is the prime episcopal responsibility. Pope Francis himself has inveighed against a resurgent “gnosticism” that replicates the deviance of its ancient forebear. It, in effect, denies the unique taking flesh of God in Jesus Christ, the article upon which the church stands or falls.

The hoary liturgical adage—“the law of prayer establishes the law of belief” (lex orandi legem statuit credendi)—must be complemented by its dialectical counterpart—the law of belief establishes the law of prayer (lex credendi legem statuit orandi). Thus the view attributed to Archbishop Arthur Roche that “the form we choose for an utterance is itself expressive of our purpose in speaking” strikes me as theologically incomplete. For, surely, our purpose in speaking liturgically is to celebrate faithfully the Gospel that is the church’s sole reason for being. And the heart of the Gospel is not a proposition or even a message, but the very person of Jesus Christ. He is the form of every ecclesial utterance whose whole purpose is to bear witness to him.

As an illustration of what I mean, let me hark back to the (rather unseemly) polemic regarding the revised translation of the words of consecration. Where the earlier sacramentary translated “calix” simply as cup; the second replaced it with the supposedly more elevated “chalice.” Following the perfervid disputations over the matter, one might be forgiven if the Lord’s diatribe against scribes and Pharisees came to mind. “Woe to you, blind guides...for which is greater, the gold or the temple that has made the gold sacred?” (Mt 23:16-17).

Which indeed is greater, the vessel or the blood poured out for the salvation of the world that consecrates both vessel and recipients? And that is the point. Translation, at its precarious best, is not an end but a means. Does it serve to promote worship in Spirit and in truth by leading believers more deeply into the paschal mystery of Jesus Christ—the only participatio actuosa that ultimately matters?

Since electronic media does not add cost per word, perhaps Fr. Imbelli
could take several passages from the 1970 Vernacular Missal, the
proposed 1998 Vernacular Missal, and the 2011 Revised Missal along with
the Latin and explain to the readers why he favours one translation or
another.

The Rev. Robert Imbelli, a priest of the Archdiocese of New York, is the author of Rekindling the Christic Imagination (Liturgical Press), which received a first-place award from the Catholic Press Association.