Have you read the most-circulated book in the history of Christianity (after the Bible)? 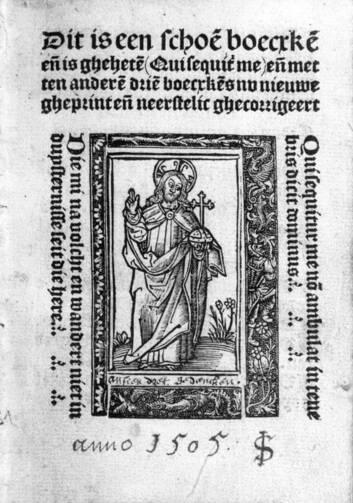 The 1505 ed. of ‘Imitation of Christ,’ at Museum Catharijneconvent, the Netherlands. (Wikimedia Commons)

St. Thomas More considered it one of the three books that everyone should own. After the Bible, Imitation of Christ is the most widely translated and circulated book in the history of Christianity. First issued in 1418, it existed in more than 800 manuscripts before the turn of the century. Over 600 editions were published between 1500 and 1650 in many languages including, Dutch, French, German, Italian, Spanish, English, Chinese, Czech, Greek, Hungarian, Japanese, Ukrainian and Polish.

The author, Thomas à Kempis, born in 1380, was a German canon regular of the Monastery of Mount St. Agnes. (Canons regular live in community under a common rule and engage in a ministry of liturgy and sacraments.) He had been schooled by the Brothers of the Common Life, a community embracing the devotio moderna call for the apostolic renewal of the church. The movement stressed the reappropriation of genuine pious practices, meditation and devout cultivation of the interior life.

Although written for religious, the book remained a bestseller through the centuries largely due to its simplicity. Sir Richard W. Southern, a medieval historian, called Imitation “one of the few books which breaks down without an effort the barrier between the medieval and modern worlds.”

The classic’s seminal effect on St. Ignatius of Loyola is recorded by the Portuguese Jesuit Gonçalves da Câmara. Ignatius discovered Imitation at Manresa, and “since then he had never wished to read any other devotional book. He recommended it to all he had dealings with...; after dinner and at other times he would open it at random and he always came across something that was close to his heart at that time and which he needed.”

St. Thérèse of Lisieux cites Imitation 14 times in her writings. The sculptor Auguste Rodin found that when he switched out each occurrence of the word “Jesus” in Imitation with “sculpture," every passage remained true.

Originally written in Latin, in meter and rhyme, the style of Imitation of Christ is neither linear nor systematic. Rather, it is, in the words of St. Francis de Sales, “a charming labyrinth of piety.” The four books comprising Imitation were initially independent treatises.

Imitation asks our question: “What sort of life is this, from which troubles and miseries are never absent, where all things are full of snares?”

Imitation asks our question: “What sort of life is this, from which troubles and miseries are never absent, where all things are full of snares?” The voice of Christ answers: “I am wont to visit my elect in two ways—by temptation and consolation.... When you think you are far from me, then often I am very near you.” We sense the exceptionality of this mystical gem in a prayer to Christ: “Left to myself, I am nothing but total weakness. But if you look upon me for an instant, I am at once made strong and filled with new joy.”

I fell in love with Imitation as a teenager. Upon my decision as a sophomore to transfer to a minor seminary, my friend Bobbianne Phillips gave me a copy of the book, a gift from her encouraging mother. The inside cover bears her name and the date she acquired it: 1947. It is the book on my nightstand.

The prophetic quality of Imitation is confirmed in the words of Pope Francis: “I believe that the secret [the Lord used to reveal his mystery] lies in the way Jesus looked at people, seeing beyond their weaknesses and failings.”

Peter John Cameron, O.P., teaches homiletics at St. Joseph's Seminary in Dunwoodie, N.Y., and is the editor in chief of Magnificat.