Skip to main content
FaithSigns Of the TimesJanuary 2, 2017 issue 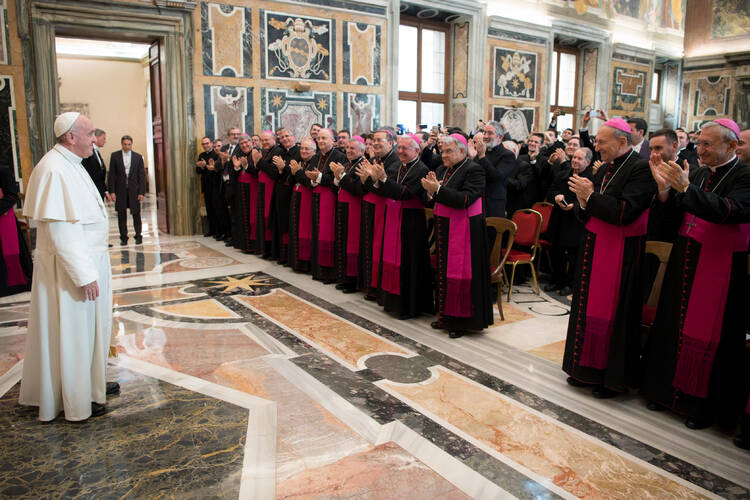 Pope Francis leads a meeting with bishops and seminarians associated with Pius XI Seminary at the Vatican Dec. 10. The seminary prepares priests for the Puglia region of southern Italy. (CNS photo/L'Osservatore Romano)

The Vatican on Dec. 7 declared that “persons with homosexual tendencies” cannot be admitted to Catholic seminaries. This reaffirms a 2005 policy now seemingly at odds with Pope Francis’ famous response, “Who am I to judge?” when asked about gay priests in 2013. The document, entitled “The Gift of the Priestly Vocation,” was drafted by the Vatican’s Congregation for Clergy, and it is meant to offer wide-ranging guidelines for priestly formation. Three of the document’s 210 paragraphs are devoted to “persons with homosexual tendencies” who desire to become priests, drawing primarily from a 2005 document that bans candidates with “deep-seated homosexual tendencies.” Pope Francis approved the document, according to a letter signed by Cardinal Beniamino Stella, who heads the clergy office. Quoting the 2005 teaching, the new document says that men “who practice homosexuality, present deep-seated homosexual tendencies or support the so-called ‘gay culture’” cannot become priests. Men who experience a “transitory” attraction to other men could be admitted to seminaries, it says, though “such tendencies must be clearly overcome at least three years before ordination to the diaconate.”

From AP, CNS, RNS, Staff and other sources
Show Comments (
5
)
Comments are automatically closed two weeks after an article's initial publication. See our comments policy for more.
Richard Booth
4 years 11 months ago
It's nice to think that transitory homosexual attractions can be "overcome," but the nature of human sexuality is that it is more or less fluid (see the literature on this topic). There are repression and suppression that might work for awhile, but the urgings are likely to present in either direct or indirect ways along the lifespan. To ban these persons from the priesthood would reduce the number of clerics significantly. But, respecting Pope Francis, I do understand what he is endorsing and why. Unfortunately, one cannot "will away" one's sexuality.
Christine Smith
4 years 11 months ago
Do you mean homosexual attractions or 'urgings' are stronger than heterosexual ones? Surely heterosexual priests have to 'overcome' their sexual desires, give up the choice to marry, and devote themselves to their vocation. I understand, however, that a homosexual living closely with men all around him would be putting himself in the occasion of sin, long term!
Richard Booth
4 years 11 months ago
Greetings...no, I am not suggesting that one type of attraction is any stronger than the other. What I was attempting to do was to comment on an America article which talked about homosexuality and the priesthood, in which it was stated (I paraphrase) that periodic or transitory homosexual attractions must be eliminated three years prior to the diaconate, according to Pope Francis. Sexual urges do not disappear with Holy Orders; it becomes a matter that requires both homosexual and heterosexual attractions do not lead to the breaking of the vow of chastity.
David Whitewolf
4 years 11 months ago
The ideas expressed above exemplify a prime insanity of the Church. Understandably, those priests who are homosexually active are violating their vow to celibacy -- but then so are HETEROSEXUALLY active priests. Heterosexuality is no more "transitory" than is homosexuality. And no one has ever asked heterosexual priests to "overcome" their sexuality. When will the Church grow up?
Derrick Weiller
4 years 10 months ago
Many thanks, David, for your clear-headed response.