Here are the biggest Catholic stories of 2016. 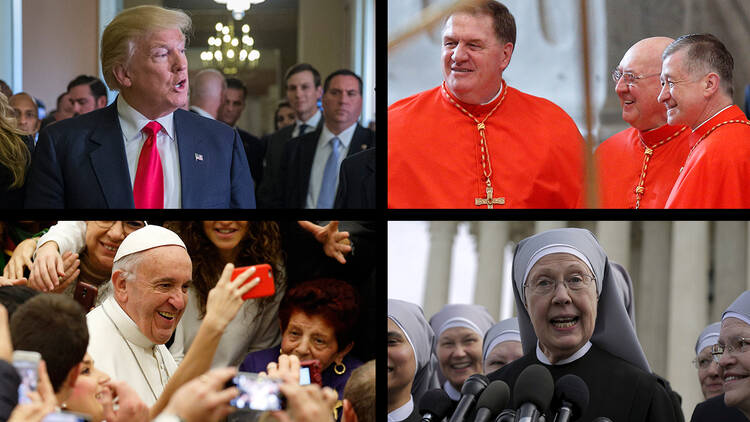 Below are some of the biggest Catholic stories of 2016. What stories do you think should have made the list? Leave your comments below.

1. Catholics from the pope on down played a role in U.S. presidential politics

Catholic angles to major political stories were easy to find in 2016, when the U.S. presidential election dominated the news.

Perhaps the most obvious example dates back to February, when Pope Francis and then-G.O.P. presidential hopeful Donald J. Trump verbally sparred over Mr. Trump’s proposal to build a wall along the U.S.-Mexico border. During a visit to the Mexican side of the border, the pope faced the United States, where dozens of undocumented migrants sat behind a border fence, and prayed for those who died making the journey north.

Responding to a journalist’s question during his flight back to Rome, the pope said politicians who build walls instead of bridges were “not Christian,” which prompted Mr. Trump to call the pontiff outrageous.

Though the rift appeared to soften after the Vatican said the pope was not speaking about any particular politician, a group of Catholic intellectuals urged their fellow believers in March not to back Mr. Trump, saying he was unfit for the presidency. When Mr. Trump wrapped up the nomination, a group of Catholics came out in support of him, pointing to the candidate’s promise to appoint to the Supreme Court someone in the mold of Justice Antonin Scalia, a Catholic jurist who died in February.

Intense campaigning between Mr. Trump and Democratic challenger Hillary Clinton was put on hold for a single evening in October, when the pair traded jokes at the Al Smith Dinner, a New York fundraiser for Catholic charitable organizations hosted by Cardinal Timothy Dolan.

But just days before the election, Pope Francis delivered a passionate speech in Rome in which he urged individuals not to succumb to the politics of fear, which some U.S. Catholics interpreted as a shot at Mr. Trump’s campaign. Come Election Day, however, Catholic voters nonetheless backed the Republican real estate mogul.

2. From gun violence to minimum wage, Catholics were part of the conversation

Catholic bishops, for example, urged lawmakers to support modest gun control proposals championed by Mr. Obama in January. Then following a mass shooting at a gay club in Orlando in June, which left close to 50 people dead, several bishops repeated the call to regulate firearms more effectively, though just a handful of bishops noted that the attack specifically targeted the L.G.B.T. community.

Protests continued across the nation to raise the federal minimum wage, an issue to which Cardinal Dolan lent his support in February.

In May, the University of Notre Dame sought to diffuse the intense partisanship plaguing U.S. elections by honoring Vice President Joe Biden and former Speaker of the House John Boehner, two Catholic politicians whose careers came to an end this year (we think...#Biden2020?).

On the religious liberty front, the U.S. Supreme Court in May kicked a challenge from the Little Sisters of the Poor against certain provisions of the Affordable Care Act back down to a lower court, prompting the sisters to declare victory. Earlier in the year, Speaker of the House Paul Ryan had invited some of the sisters to hear President Barack Obama’s final State of the Union address.

3. A crop of new leaders for the church in the United States emerged

There was also plenty of church news involving American Catholics as well.

Cardinal Blase Cupich of Chicago was given two major nods by Pope Francis, who named him to the powerful Congregation for Bishops in July and then made him a cardinal in November. In addition to Cardinal Cupich, the pope also gave red hats to two other American bishops: Archbishop Joseph Tobin of Indianapolis, who will soon head off to lead the Archdiocese of Newark, and Bishop Kevin Farrell, who was the bishop of Dallas before being appointed by the pope to run a new Vatican office that deals with family life in August.

The pope also launched a commission to study the history of women deacons in the church, and appointed to it American scholar Phyllis Zagano.

Georgetown University in August announced that it would apologize to the descendants of 238 slaves it had sold in 1838 and permanently rename two campus buildings honoring the Jesuits who signed off on the sale.

American bishops elected new leaders in November, sticking to custom and elevating Cardinal Daniel DiNardo of Galveston-Houston from vice-president of the U.S. Conference of Catholic Bishops to president. They selected as his number two Archbishop JoséGómez of Los Angeles, the first Mexican-American to hold a top leadership post in the conference, a fitting milestone as bishops also learned at that meeting that the future of U.S. Catholicism lies with younger, Latino Catholics.

They also announced that a new pastoral letter condemning racism was in the works, and Archbishop Wilton Gregory of Atlanta called on bishops to condemn post-election hate crimes.

4. Protecting immigrants was once again a priority for bishops

Circling back to the new president, U.S. bishops expressed optimism in working with Mr. Trump on abortion, but they also voiced support for undocumented Americans in light of the president-elect’s suggestions that he would seek to deport the nearly 11 million people living illegally in the United States.

In response to that campaign promise, the heads of 27 Jesuit colleges and universities in the United States signed a statement pledging to protect undocumented students.

5. And Pope Francis showed no signs of slowing down

Finally, Pope Francis turned 80 in December, and he marked the day by celebrating with some of Rome’s homeless. But that’s not all he did in 2016. Read more about the biggest pope stories of the year later this week.

RELATED: What You Read, Shared and Commented on in 2016

@MikeOLoughlin
Show Comments (
2
)
Comments are automatically closed two weeks after an article's initial publication. See our comments policy for more.
Lisa Weber
5 years 7 months ago
1. Pope Francis shows no signs of slowing down. This is the most hopeful story. 2. Catholics were part of the conversation. They should be. 3. New Catholic leaders emerged. Time will tell whether this is important or just business as usual. 4.Protecting immigrants a priority for the bishops. This was negated by the Catholic influence on the election. 5. The Catholic role in the election. This is a story of shame. Supporting a corrupt and incompetent candidate in hopes of getting a conservative Supreme Court justice is indefensible. The fallout of this decision is not clear yet, but it is unlikely to be positive. I find Jesus far more interesting and inspiring than the Church. If the Church actually paid attention to what Jesus said and did, it would be a better place than it is.
Carlos Orozco
5 years 7 months ago
Merry Christmas. This year especially to Christians in liberated Aleppo, who can once again celebrate their faith without fear. May 2017 mark the end of the brutal war in Syria.