Pope Francis' schedule is even more ambitious in 2017.

Pope Francis' schedule is even more ambitious in 2017. 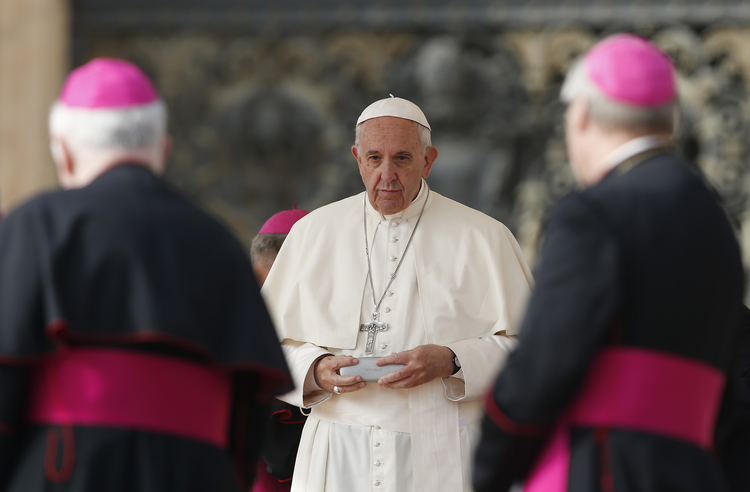 Pope Francis prepares to greet bishops during his general audience in St. Peter's Square at the Vatican Oct. 19. (CNS photo)

Pope Francis enters the new year enjoying good health and, it seems, extraordinary inner peace. On March 13 he begins the fifth year of his ministry as successor to St. Peter. While the Jubilee of Mercy was an action-packed year for him, 2017 promises to be no less so.

When a close friend recently suggested that he should slow down, Francis calmly responded that at his stage of life one has to move even faster. Though his agenda has been only partially defined at the time of this writing, what is known already confirms his intention to continue at high speed over the coming 12 months. As pope, he has made 17 foreign trips outside Italy, visiting 26 countries as well as the European Parliament and Council of Europe in Strasbourg, France, and there are more on the horizon.

He is expected to visit Colombia, perhaps in April, as he promised he would do once the peace accord between the government and the left-wing revolutionary group FARC was ratified, ending the 52-year civil war. After a nationwide referendum narrowly rejected the first accord, the Colombian Congress unanimously approved the revised version in late November, thereby opening the door for him to come. He might also decide to visit another Latin American country on what will be his third visit to his home continent.

The Argentine pope will visit Fatima on May 12-13, for the 100th anniversary of the apparitions of Our Lady to the three shepherd children in this town in Portugal. This was announced by the Patriarch of Lisbon, Manuel Clemente. Francis will be the fourth pope to pray at this Marian shrine, following Paul VI (1967), St. John Paul II (1982, 1991 and 2000) and Benedict XVI (2010).

After visiting Africa for the first time in November 2015, when he went to Kenya, Uganda and the Central African Republic, Francis wants to return this year. Among the countries being considered, two stand out: the Democratic Republic of the Congo and South Sudan. Both are caught up in armed conflicts. The D.R.C. is a mineral-rich country gravely wounded by decades of war, violence, corruption and political crises. Its president, Joseph Kabila, visited Francis in the Vatican last September, but whether the pope can go to this land, where 43 percent of the population is Catholic, depends on the political situation. Another possible destination is the conflict-torn, oil-rich South Sudan, where 37 percent of the population is Catholic, as is the president, Salva Kiir Mayardit, whom Francis met in Kampala during his visit to Uganda.

The Jesuit pope believes the church’s future is in Asia. He has visited this continent twice already, going to South Korea, Sri Lanka and the Philippines, and will return this year, perhaps in November, to visit India—a majority Hindu country, and Bangladesh—the world’s third largest Muslim country.

Since becoming pope, Francis has reached out repeatedly to Muslims. In recognition of this, for the first time ever, the grand imam of Al-Azhar, Sheik Tayeb, the world’s most prestigious institution of Sunni Islam (who account for 85 percent of all Muslims), visited him in the Vatican on May 23, 2015. “The meeting is the message,” Francis stated then, and the interpersonal dynamic was so positive that the sheik invited him to visit Al-Azhar, in Cairo, for a joint initiative. That could happen this year.

Apart from foreign trips and pastoral visits to the archdioceses of Milan and Genoa, Francis will have an extremely busy year not only receiving heads of state and dignitaries from all continents but also meeting brother bishops from many countries making their ad limina visits to the Holy See. (These visits were suspended during the Jubilee Year of Mercy, and there is now a backlog.)

Following tradition, Francis will lead the major liturgies at St. Peter’s Basilica during Holy Week, Pentecost and Christmas and will preside at canonization ceremonies from time to time.

During the year, Francis will hold bimonthly meetings with his nine cardinal advisers to advance the reform of the Roman Curia and promote synodality and decentralization in the church worldwide. He will make senior-level personnel changes in the Vatican and might even hold a consistory to make new cardinals at the year’s end.

Pope Francis has taken personal charge of the Vatican’s work for migrants and refugees and is likely to surprise us with some daring and incisive initiatives in this and other fields in 2017, as he has done since his pontificate began.

Show Comments (
2
)
Comments are automatically closed two weeks after an article's initial publication. See our comments policy for more.
Bruce Snowden
3 years 1 month ago
Holy Father Francis, I fully agree with you when you say at 80 one must move faster and not slow down. That's why I do so much posting, probably annoying to some. The simple truth is at 85, my age, there probably isn't much time left to say what I feel I want to say, perhaps needs to be said. So for me too, like you, Holy Father, there's no slowing down. "Say it now, or we may not get a chance to say it!" Just hope whatever I may say is in someway beneficial and not simply blabber! May you live to be 100. The Church needs you!
Vincent Gaglione
3 years ago
Cent anni, Pope Francis! Just don't move so fast as to exhaust yourself. We need you to be vigorously with us for a long, long time!
Advertisement

This article also appeared in print, under the headline “No Slowing Down,” in the January 2, 2017, issue.