Pope Francis: There will be no 'reform of the reform' of the liturgy. 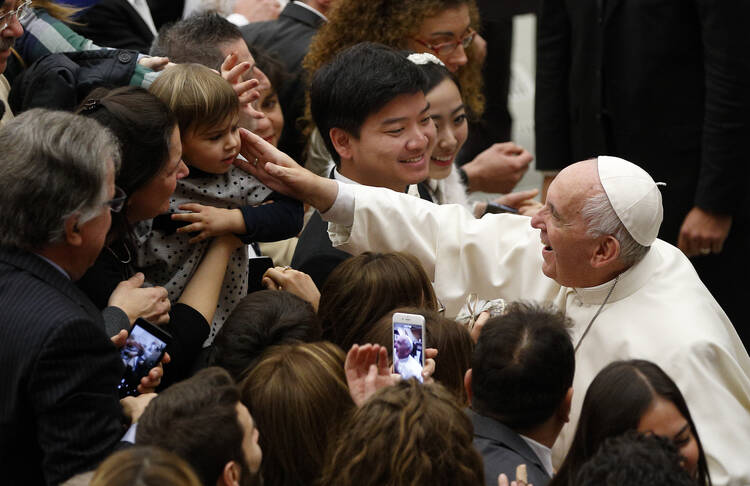 Pope Francis greets a child during his general audience in Paul VI hall at the Vatican Dec. 7. At his audience the pope began a new series of talks about hope. (CNS photo/Paul Haring)

For some years now there has been talk of a “reform of the reform” of the liturgy promulgated by Paul VI after the Second Vatican Council. Such talk became more vocal following Pope Benedict XVI’s decision in July 2007 to restore the “extraordinary” rite alongside the “ordinary” one. Moreover, more recently some prelates, including Cardinal Robert Sarah, prefect of the Congregation for Divine Worship, have given credence to this possibility and advocated that priests return to celebrating Mass facing the altar rather than the congregation.

Antonio Spadaro, S.J., asked Pope Francis what he thinks of such proposals when he interviewed him on July 9, four days after Cardinal Sarah had given a lecture in London calling for priests to implement this change at the beginning of Advent and affirming that a “reform of the reform” is underway.

Francis’ answer appears in the preface to the 1,000-page book Nei Tuoi Occhi È La Mia Parola (In Your Eyes Is My Word), a collection of his main talks and homilies as archbishop of Buenos Aires.

He began by affirming that Pope Benedict XVI (in his motu proprio of July 2007 “Summorum Pontificum,” on the use of the Roman Liturgy prior to the reform of 1970), “made a right and magnanimous gesture by going to meet some groups and persons with a certain mentality that had nostalgia [for the old liturgy] and were distancing themselves.”

He emphasized, however, that this was “an exception” and “for that reason it is referred to as ‘the extraordinary’ rite, but the ordinary rite of the church is not this.” Francis recognized the need “to go to meet with magnanimity the one who is attached to a certain way of praying,” but he stated clearly that “the ordinary rite is not this.”

He insisted that the Second Vatican Council and its “Constitution on the Sacred Liturgy”“must be carried forward as they are” and declared furthermore that “to speak of ‘the reform of the reform’ is an error!”

Probing further, Father Spadaro asked whether “apart from those who are sincere and ask for this possibility out of custom or devotion,” the desire for this rite “could also express something else.”

Francis responded: “I ask myself this. For example, I always try to understand what is behind persons who are too young to have experienced the preconciliar liturgy but who nevertheless want it. At times, I find myself in front of persons who are very rigid, an attitude of rigidity. And I ask myself: How come such rigidity?” And when one “digs” deeper, he said, one discovers that “this rigidity always hides something: insecurity, or at times something else…. Rigidity is defensive. True love is not rigid.”

Turning to the question of tradition, Father Spadaro noted that “some understand this also in a rigid way.” Francis responded, “But no: tradition blossoms!” Nevertheless, he said, “there’s a traditionalism that is a rigid fundamentalism; this is not good. Fidelity on the other hand implies growth. In transmitting the deposit of faith from one epoch to another, tradition grows and consolidates itself with the passing of time, as St. Vincent of Lerins said in his Commonitorium Primum.” And the Liturgy of the Hours, the pope pointed out, quotes St. Vincent: “The dogma of the Christian religion too must follow these laws. It progresses, consolidates itself with the years, developing itself with time, deepening itself with age.”

It is worth noting that on the day Pope Francis spoke with Father Spadaro, he also received in private audience Cardinal Sarah, who has emerged as the standard bearer of those who are pushing for a “reform of the reform.” Two days later, at the pope’s instruction, the Vatican spokesman, Federico Lombardi, S.J., issued a declaration stating that the “ordinary” form of the celebration of the Mass is the one envisaged by the Missal promulgated by Paul VI, while the “extraordinary” rite approved by Benedict XVI is not to take its place. Father Lombardi denied that new liturgical directives would be introduced in Advent and asked that the expression “reform of the reform” be avoided in referring to the liturgy. He revealed that Cardinal Sarah “expressly agreed to all this” in his meeting with the pope.

In a word, Francis wants the Second Vatican Council’s directives on the liturgy to be more fully implemented, not rolled back. It seems clear that he feels this has not yet happened.

@gerryorome
Show Comments (
5
)
Comments are automatically closed two weeks after an article's initial publication. See our comments policy for more.
Henry George
6 years 1 month ago
When I read the histories of Vatican II, especially concerning the proposed changes in the Liturgy I wonder why Paul VI just did not allow the following: The "Old Mass" in Latin The "Old Mass" in Vernacular The "New Mass" in Latin The "New Mass" in the Vernacular and then the let the "People of God" vote with their feet. After five years the Bishop and the Parish Priests could do their best to meet the needs of all the the "People of God" by agreeing to hold the "less popular" liturgies in a number of Parishes in the Diocese. There was no need to remove the Altar Rails, to tear out the old beautiful Altars, to move the Tabernacle to some forgotten spot, to give up a rich musical tradition for songs to musically trite that you could offer $ 1,000 to whomever could hum or whistle the unforgettable melodies at last week's Liturgy and never lose your money. Why Priests decided to stop wearing the beautiful liturgical garments for polyester wrap-arounds of various shades of neon is beyond me. Meanwhile 65 % of Catholics stopped attending the Holy Mass - AFTER - the Liturgical Changes of Vatican II were forced upon the "People of God". Now we have rigid defenders of a 70's version of the "New Liturgy" who are blind and tone-deaf to mediocre hymns/homilies/prayers that seem to praise humans more than Christ Jesus who gave His whole life for our Salvation.
Lisa Weber
6 years 1 month ago
The liturgical changes came too late to keep many of the baby boomers in church. The "people of God" voted with their feet and left.
Christine Smith
6 years 1 month ago
Is this a semantics battle or is Pope Francis shutting down the effort to restore the liturgy referred to as 'the reform of the reform'? We all know the liturgy is on life support. Sure some parts in some places are functioning and healthy. But there is the problem of what passes for liturgy in other places, the proliferation of abuses- many thoroughly accepted and established by attrition, that threatens the whole. You can go to Sunday Mass in two different places and not recognize that they are both the Catholic Mass! I have had this experience. Summorum Pontificum did not 'restore' the Tridentine Mass, as its practice was never abrogated. (Despite determined bullying to squash it.) It is not 'extraordinary' because it is an exception. This is the Mass celebrated by many of our priest saints, and inspired many other saints. It is clearly extraordinary when set alongside the Mass of Paul VI as practiced. BXVI had hoped that the two forms would enrich each other and be given equal opportunity. Pope Francis turns critical speaking of this- and I think he was set up by progressive Spadaro- using the old canard of patting those on the head that are devoted out of nostalgia. Those young people preferring the Old Mass not out of nostalgia are explained away by the other canard-rigidity. They are sent packing to the peripheries. The truth is the the Catholic Mass as practiced has gone so far off the rails it does not even resemble what Pope Paul envisioned. Cd Sarah's call to ad orientum worship is an example of that. The Mass was never meant to be celebrated facing the people. Nor was the tabernacle to be anyplace but 'central', or Communion to be taken standing, or in the hand, or 'distributed' by hands that were not ordained, or to be said entirely in the vernacular. or for bands to 'perform' by the altar. None of these now accepted practices were promulgated or mandated in the documents of V2. The falling off of attendance at Mass, and generally from the practice of the faith, can be attributed very nearly to the disastrous results of VII, and with it the dumbing down of Catholicism. If Pope Francis is talking about V2 and the Constitution on the Liturgy being 'carried forward as they are', as they are written and not as how they have been misinterpreted, then there is no difference of opinion or problem. But as is his style, it is not clear what he means.
David Whitewolf
6 years 1 month ago
"The Mass was never meant to [be] celebrated facing the people." I suppose Jesus himself turned his back to his gathered disciples while celebrating his Last Supper?
Lisa Weber
6 years 1 month ago
I grew up before the changes of Vatican II were implemented. Mass in Latin with the priest facing away from the people was mostly incomprehensible. Yes, there was a translation in the missal, but the Mass could not be understood without being translated. The celebration of the Mass left out those in the congregation. The obvious sexism and clericalism of the pre-Vatican II Church was easy to leave. I will not attend a church that promotes pre-Vatican II thinking by celebrating the extraordinary form of the Mass because the memories associated with my early years in church are too painful.