New cardinals signal a shift away from the U.S. culture wars 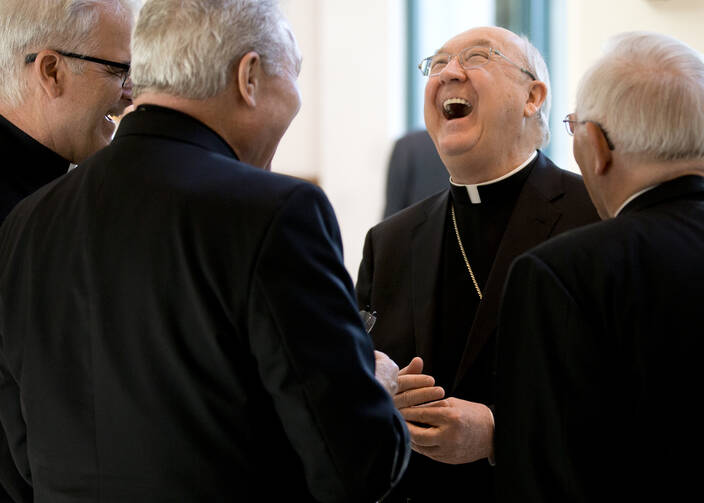 Bishop Kevin J. Farrell, who headed the Dallas Diocese from 2007 until mid-August, laughs with other bishops at the U.S. Conference of Catholic Bishops' building in Washington Sept. 13.

The pope’s decision to make two American archbishops cardinals is a message to other U.S. prelates that the church needs leaders less concerned with culture war issues and who are instead focused on building bridges and making the church a more welcoming place.

In a move that will further shake up how the American hierarchy operates, Pope Francis on Sunday announced the creation of new 17 new cardinals, including three American bishops: Archbishop Blase Cupich of Chicago, Archbishop Joseph Tobin of Indianapolis and Bishop Kevin Farrell, the former bishop of Dallas who was appointed by the pope to lead a new Vatican department on family life earlier this year.

The impact on how the church operates in the United States could be immense.

Archbishop Cupich is a key Francis ally on proposed reforms that supporters say could make the church more welcoming to disaffected Catholics. Archbishop Tobin’s openness toward expanded opportunities for women in the church and his support for resettling Syrian refugees, even over objections from G.O.P. vice presidential hopeful Gov. Mike Pence, put him squarely in line with the pope’s agenda.

Elevating Archbishop Cupich to a cardinal was largely seen as a matter of when, not if.

Pope Francis, after all, handpicked the Chicago archbishop in 2014, passing over the slate of candidates prepared for him by advisors. The pick to lead one of the U.S. church’s most storied and influential archdioceses caught some church leaders off guard. Before taking the helm in Chicago, Archbishop Cupich led the small dioceses of Spokane, Wash., and Rapid City, S.D.

But since his installation, Archbishop Cupich has emerged as a key Francis ally in the United States. He was present in Rome at the second part of the Vatican meeting of bishops about family life, where he urged delegates to consider ways to makes Catholics living in irregular family situations feel more welcome in the church, including the possibility of divorced and remarried Catholics being able to receive communion.

On the domestic front, Archbishop Cupich has publicly urged his brother bishops to spend more time on issues such as immigration reform and workers’ rights. At the meeting of the U.S. Conference of Catholic Bishops last year, for example, the archbishop took to the floor to ask that immigration be included on the body’s list of key priorities that guide their work. His suggestion was rejected.

Whereas Archbishop Cupich’s appointment was expected, the nod to Archbishop Tobin comes as something of a surprise.

Indianapolis is certainly not an archdiocese used to housing a cardinal, but Pope Francis was aware of how Archbishop Tobin managed the controversial oversight of Catholic sisters in the United States ordered by Pope Benedict XVI in 2012.

Prior to his assignment in Indianapolis, the archbishop had served in Rome in the Vatican department overseeing religious life. He angered church hardliners in the United States and Rome for urging greater restraint when it came to investigating U.S. sisters over doctrinal concerns.

The archbishop was later praised by women religious for his sensitivity and compassion in listening to their concerns and he was credited with helping to wrap up the investigation two years earlier than anticipated, with as little fall out as possible for either side.

Just this week, Archbishop Tobin expressed support for the idea of women serving as deacons in the Catholic Church, and with it the possibility that they could preach at Mass.

According to the National Catholic Reporter, the archbishop said he was “hopeful” about the possibility during a question and answer session at a Catholic conference for women.

“I'm praying Pope Francis can make good on his promise to find more incisive and visible roles for women in the church,” Tobin said, according to N.C.R.

On the political front, Archbishop Tobin made headlines late last year when he clashed with Gov. Mike Pence, now Donald Trump’s running mate. Pence had joined many other governors across the nation in announcing that Syrian refugees would not be welcome in his state, citing concerns about terrorism.

The Catholic Charities agency in Indianapolis had been working to resettle a Syrian family for several months at the time of the announcement, and Pence asked that they put plans on hold. After a meeting between the two men, Archbishop Tobin announced that he would direct the agency to move forward with the resettlement regardless.

Bishop Farrell’s elevation to cardinal will have less of an impact on how the church operates in the United States, but the move means he is suddenly the top American working in Rome.

The Irish-born bishop spent much of his career working in Washington, D.C., before being named leader of the church in Dallas in 2007. In recent years, the social media-savvy bishop blogged frequently about the need for greater gun control laws, especially after the violence that erupted this summer in which five police officers were shot dead during otherwise peaceful protests over the killing of unarmed African American men at the hand of police officers.

Just as notable in the pope’s announcement are three omissions: Archbishop Charles Chaput of Philadelphia, Archbishop William Lori of Baltimore and Archbishop Jose Gomez of Los Angeles. The three archdioceses are traditionally led by cardinals, but Francis has shown that geography alone is no longer the most important component when it comes to bestowing the honor.

Archbishop Chaput has resisted some of the pope’s efforts at reform, writing that opening up communion to divorced and remarried Catholics is a no go, despite the pope’s seeming to endorse the possibility. And Archbishop Lori has been vocal on one the nation’s most heated culture war issues, serving on the frontlines of the church’s battles with the Obama administration over contraception as head of the U.S.C.C.B.’s religious liberty committee.

Passing over Archbishop Gomez, who was ordained a priest as a member of Opus Dei, comes as a surprise. He was seen as a possible pick in this round in part because of his Hispanic heritage, the fastest growing demographic the U.S. church, and his frequent appeals for public policy more favorable to undocumented immigrants are in line with the pope.

The omissions mean that three of the nation’s largest archdioceses would not be represented in a papal conclave were one to be held in the near future.

When they are made cardinals at a Vatican ceremony coinciding with the end of the Year of Mercy, Archbishops Cupich and Tobin will become two of the most powerful Catholic voices in the United States. Practically speaking, that means they will be asked to spend more time away from their archdioceses in Rome helping the pope govern the universal church and, when the time comes, electing a new pope.

The main effect at home will be their increased influence. Their words and agendas will carry significantly more weight with their brother bishops and perhaps even with everyday Catholics. When a cardinal speaks, certain Catholics listen. But how they exert that influence will be key to the amount of impact they can have on the church here. American prelates will recognize that they are the kinds of leaders the pope wants.

The picks show Francis wants the church in America to be more focused on issues like immigration, the role of women in the church and the need to bypass traditional centers of power in order to find leaders who smell of the sheep, as the pope has put it.

The moves are further cues to American bishops about how the pope wants the church to be run. The big question now is whether the two new American cardinals will be able to use their papal nod of approval to steer a new course for the U.S. church.