Pope Benedict: Pope Francis is better at reforming the Curia

Pope Benedict: Pope Francis is better at reforming the Curia 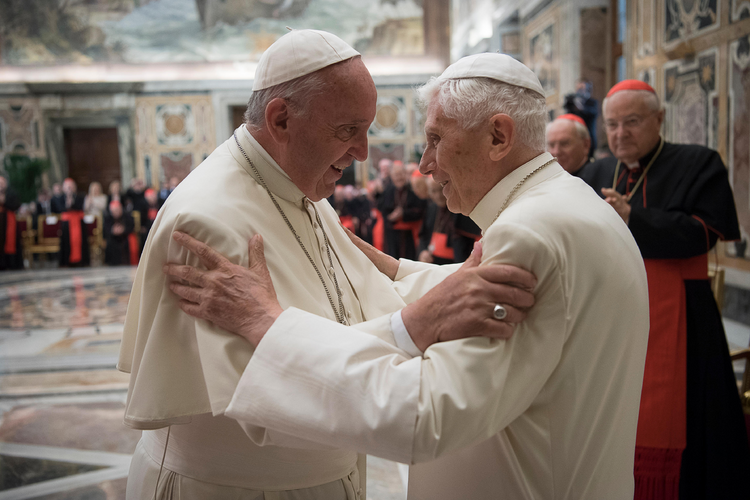 While retired Pope Benedict XVI said organization and governance are not his strong suits, he also said, "I am unable to see myself as a failure."

In a book-length interview with the German author Peter Seewald, Pope Benedict said that when he resigned he had the "peace of someone who had overcome difficulty" and "could tranquilly pass the helm to the one who came next."

The new book, "Last Testament," will be released in English by Bloomsbury in November. The German and Italian editions were set for release on Sept. 9, but some excerpts were published on Sept. 8 by the Italian daily newspaper Corriere della Sera.

Pope Benedict insisted once again that he was not pressured by anyone or any event to resign and he did not feel he was running away from any problem.

"My weak point perhaps is a lack of resolve in governing and making decisions," he said. "Here, in reality, I am more a professor, one who reflects and meditates on spiritual questions. Practical governance was not my forte and this certainly was a weakness."

Pope Francis, on the other hand, "is a man of practical reform," the retired pope said. His personality and experience as a Jesuit provincial and archbishop have enabled him to take practical organizational steps.

The retired pope, who is 89, said he had no inkling that then-Cardinal Jorge Mario Bergoglio would be elected his successor; "no one expected him."

"When I first heard his name, I was unsure," he said. "But when I saw how he spoke with God and with people, I truly was content. And happy."

Pope Benedict said it made no impression on him that the brand new pope chose to appear on the balcony of St. Peter's Basilica without wearing the ermine-lined red mozzetta or cape. "What did touch me, though, was that even before going out onto the loggia, he tried to phone me."

Electing the first Jesuit pope and the first Latin American pope, the College of Cardinals showed that "the church is moving, dynamic, open, with the prospect of new developments before it," he said. "What is beautiful and encouraging is that even in our day things that no one expected happen and they demonstrate that the church is alive and brimming with new possibilities."

Seewald also asked Pope Benedict about reports that during his pontificate there was a so-called "gay lobby" in the Curia and the group protected certain priests by threatening to blackmail others.

The retired pope replied that a commission of three cardinals he had named to investigate a major leak of reserved documents and conduct an administrative review of Vatican offices and procedures identified "a small group of four, perhaps five persons," which a few Vatican officials and the media later would refer to as the "gay lobby."

"We dissolved it," Pope Benedict said.

The retired pope, who has had a pacemaker since 1997 and can no longer see out of his left eye, told Seewald that preparing for death is part of his daily routine. It's not a matter of getting his earthly affairs in order, he said, "but of preparing to pass the ultimate examination before God."