A Closing and an Opening: On graduation and the priesthood 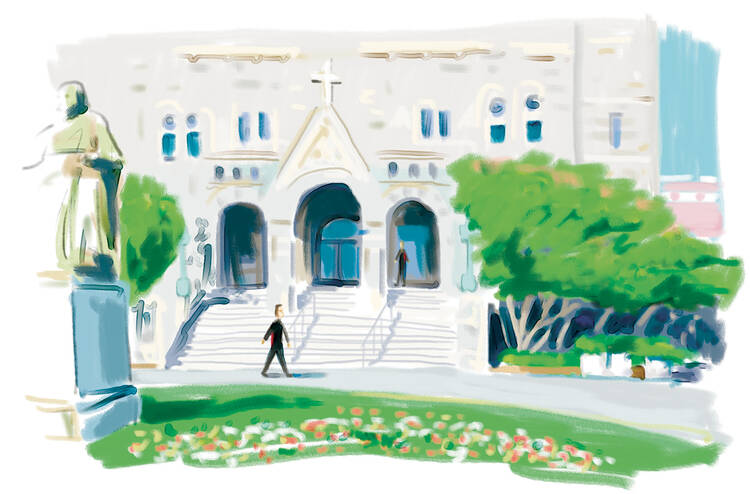 I walked with my 12-year-old nephew that balmy June afternoon through the manicured green Georgian campus of the The Gilman School in Baltimore. My sister had already rushed ahead to find us seats; my brother-in-law was parking the car; and my young companion’s older brother and soon-to-be-Hoya was long gone to assemble with his fellows for the graduation ceremony. I supported Matthew as he limped along because of a tense Achilles tendon. Dressed in my best black suit, cuffs with crested links and Panama hat, I focused my mind on the upcoming event and on caring for my wounded charge.

Suddenly, as I turned the corner of the handsome red brick Carey Hall, I spied through the lush trees, off in the distance, the top of the tower of the Cathedral of Mary Our Queen, where I had been ordained 29 years before, prostrating myself with 13 others on the floor before its high altar. As I ambled slowly to my graduation seat, I was quickly transformed.

A stillness began to grip me, as I sat there under the overarching branches, listening to the headmaster’s talk, then the valedictorian’s, the awards, the parting antics of the boys and the twang of the bagpipe as they awkwardly tumbled down the stairs of the dais. The Gilman graduation ceremony seemed very real, yes indeed (I was ever so proud of Greg). But in the midst of it, my inner silence returned me to the cathedral, and to the meaning of the priesthood, and to the value and worth of all the sacrifices that it demands.

Peace and gratitude for it all welled up, along with a renewed strength of commitment to the work of education that was being celebrated in front of me and that, together with Gilman, I could celebrate in my own Georgetown life. And I could do so precisely because of what happened in that building, whose nearby tower mutely told the meaning of all that we were doing that Sunday afternoon, even as it has told the meaning of all that I have done over 29 years.

Just as the oft repeated words of the Hail Mary become, in the rosary, icons that open into the abyss of their significance, so the transpiring events sounded a mantra calling forth a depth of feeling that T. S. Eliot so well describes in “Little Gidding” in his Four Quartets:

We shall not cease from exploration,
and the end of all our exploring will be to arrive where we started
and know the place for the first time.

The past and the present merged, and in doing so, they renewed me for the future.

Is this renewing not to know the eternal within the relentless movement of time? To return to the cathedral where it all began, but to return changed because of time, is yet to sink into the meaning of time. Is it not the same meaning, then as now? To return to the cathedral, is it not to return to what continually happens there—the timeless mystery of the Eucharist, which gives all time its meaning, which both absorbs time and infuses time, blotting what must always change into what can never change?

All our explorations, says Eliot, return us to the center—to the inner life of the cathedral. This center’s fresh vision, given that happy Gilman day at a time and in a place of surprise, appeared, as I later recalled with joy, on that best of days, the center’s own feast—Corpus Christi, the body of Christ, which is born ever new by the hidden passion of every priest.

Show Comments (
3
)
Comments are automatically closed two weeks after an article's initial publication. See our comments policy for more.
Lisa Weber
5 years 12 months ago
This is a beautiful reflection and I am grateful to its author. I do wonder how a woman is supposed to feel about this feeling of awe at the center of the cathedral when women are categorically excluded and silenced. Jesus did not exclude or silence women - when will the church see that and correct its error?
L J
5 years 12 months ago
Lisa it is curious that the focus of the article is inner transformation yet you make it about you. Mother Angelica Teresa of Calcutta Dorothy Day Edith Stein Katherine Drexel Maria Faustina Kowalska.... . You can teach, speak, and live more enthusiastically for Christ than these if you dare.
Rhett Segall
5 years 11 months ago
How poignantly Fr. Fields brings home the occasion of God’s grace! The graduation of his nephew sharpens his sense of beginnings; the lovely grounds awakens the treasures of God’s beauty; the Cathedral tower reminds him of the timeless meaning of his priestly ordination, so well elucidated by the poetic insight of Eliot. Thank you Fr. Fields for sharing a way of listening, a way of exploring! Rhett Segall