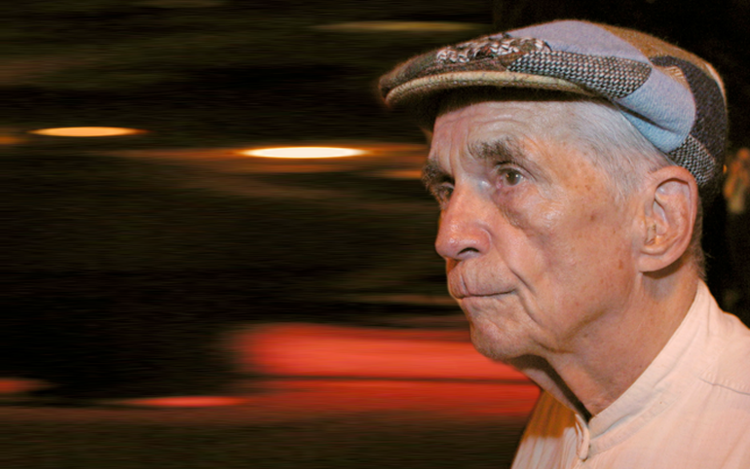 A Jesuit priest, poet, activist, scholar, writer, fugitive and inmate, Daniel J. Berrigan was one of the most influential Catholics of our time. His place in American Catholic history is beside the other two giants of the 20th century: Dorothy Day and Thomas Merton, both of whom were his friends. Father Berrigan inspired generations of men and women in the battle for social justice and put himself on the front lines in the war against war. He was perhaps best known as a member of the Catonsville Nine, a group of Catholic activists who seized piles of draft records in May 1968, during the Vietnam War, and set them on fire. Instead of appearing at his sentencing hearing two years later, Father Berrigan chose to go underground, “a fugitive from injustice,” as he put it with his dry wit. He was captured three months later by agents of the Federal Bureau of Investigation and jailed, one of a series of incarcerations over the years. A widely circulated photo showed him handcuffed, with a wide grin, flashing a peace sign.

Saints are often people who live out their Christianity in a way that seems ridiculous or even scandalous. As Father Berrigan wrote about Dorothy Day, he lived the Gospel as if it were true. But his actions rarely won him acclaim from the hierarchy, and he faced fierce opposition from Cardinal Francis Spellman, the powerful archbishop of New York. Even within the Jesuits there were grumblings about his “way of proceeding,” though Pedro Arrupe, S.J., then superior general, visited him in his cell in a federal prison during a trip to the United States, signaling his support.

Father Berrigan did not mellow in old age. He continued to agitate for change until the end. “Start with the impossible,” he wrote. “Proceed calmly towards the improbable. No worry, there are at least five exits.”

The Editors
Show Comments (
4
)
Comments are automatically closed two weeks after an article's initial publication. See our comments policy for more.
Leonard Villa
6 years 1 month ago
Some examples and more precise language would be helpful in your editorial in your lionizing Fr. Berrigan. Yes, he inspired some and was influential on some. Social justice? How defined? "(O)n the front lines in the war against war"? Yes against the Vietnam war and against the United States. I don't recall any concern/demonstrations on his part against the communists of North Vietnam, the Soviets, Red China,the Laos-Pol Pot genocide and their subversions and their waging wars of conquest or any pressure or demonstrations against any communists. Catholic social teaching points out in Divini Redemptoris that communism is intrinsically evil. The U.S was at fault for a lot of things in the Vietnam war but his protests were one-sided of an ideological stripe (in sync with a mainstream media that often misrepresented what was happening and ignored the communist role in the conflict.) I would not identify that ideology with Catholic social teaching. Now the Lord judges: may Fr. Berrigan rest in peace.
Michael Appleton
6 years 1 month ago
I had the privilege of meeting Dan and Phil Berrigan as an undergraduate when they spoke at the Harvard-Radcliffe Catholic Student Center in 1967 or 1968. They were phenomenal men, intensely committed to the gospel and inspiring in their passion. They were also right.
Vincent Gaglione
6 years 1 month ago
I was not able to watch the funeral Mass for Fr. Daniel Berrigan nor could I find a recording of it. My fantasy funeral service for Daniel Berrigan looked and sounded something like this. The Cardinal Archbishop of New York, dressed in simple black cassock and merely a presence on the altar, not a celebrant, during the service, rises after Communion to express the condolences of the people of the archdiocese. He makes very brief remarks: “We acknowledge our indebtedness to Daniel Berrigan for his prophetic preaching of the Gospel by the life that he led. When so many of us were so wrong for so long, he was always so right. Daniel Berrigan, pray for us.”
Leo Cleary
6 years 1 month ago
One did not need to know him for long to be touched by his warmth and insight. Many years ago, in a particularly nervous time during the Cold War, and in the midst of a tiredness and sense of loss, he gave a small group of us a weekend retreat. No longer in prison, some denounced him as a traitor to America; or a disobedient, bad priest and Jesuit. He was clearly their enemy. Later, seeing him alone for a moment, I asked him "How do you respond to your enemies?" He said with warm eyes: "I don't have any enemies."