The gentle, grace-filled life of Peter Faber: One of the very first (and one of Pope Francis’ favorite) Jesuits 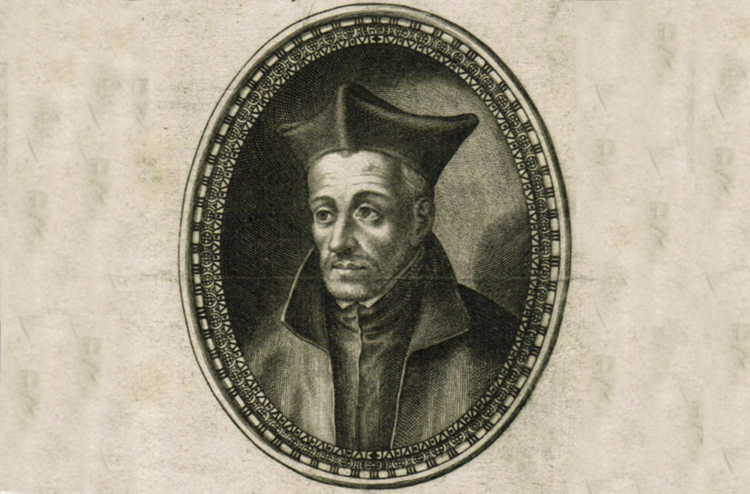 Pope Francis surprised his interviewer last August when he said that Pierre Favre (usually Anglicized to Peter Faber) was among his favorite Jesuits (Am., 9/30/13). Faber is not someone well known to the general public. Thanks to the pope he is beginning to become far better known, and rightly so. Faber formally was proclaimed a saint on Dec. 17, 2013.

Peter Faber stands at the threshold of the Society of Jesus. He was the first companion in Paris of Ignatius Loyola. Francis Xavier was the second. Ignatius we know as the author of the Spiritual Exercises and as the first and most important of the 10 founders of the Society of Jesus. Francis Xavier we know as an inspiration to generations of Christian missionaries bringing the Gospel message worldwide. Peter Faber, on the other hand, the first among those companions to be ordained a priest, was the “quiet companion.”

As a Jesuit he was pulled at the request of others from one place to another, and one activity to another, in the brief years of his directly apostolic life. His was a ministry that brought the compassionate, consoling, redeeming Jesus to those with whom he dealt. He carried it out especially through presence, friendship, preaching and spiritual direction. These activities depend greatly upon personal characteristics. Pope Francis described well the characteristics of Faber that particularly moved him: “[His] dialogue with all, even the most remote, and even with his opponents, his simple piety, a certain ‘naïveté’ perhaps, his being available straightaway, his careful interior discernment; the fact that he was a man capable of great and strong decisions but also capable of being so gentle and loving.”

Faber is not someone well known to the general public. Thanks to the pope he is beginning to become far better known, and rightly so.

Peter Faber, born in 1506, came from the pastoral mountains of the Duchy of Savoy, a fearlessly independent redoubt of equally decisive citizens. One of their rulers once exclaimed in exasperation, “These devils of Savoy are never content. If the good God rained down gold coins on the houses of Savoy, they would complain that he had damaged their roofs.”

Faber and Xavier first met in 1525 when they were both 19 years old. Faber arrived as a student at the University of Paris, then the most famous educational institution in the world. Three years later Ignatius arrived to further his studies in order “to help souls.” For a year Ignatius attended the traditionalist Collège de Montaigu, as Faber earlier had done for a while, a school immortalized by Erasmus as a place of “scurvy, fleas, hard-beds and harder blows, stale herring, rotten eggs and sour wine.” Then Ignatius transferred to the more contemporarily oriented Collège Ste. Barbe where he met his assigned roommates, Faber and Xavier. Presumably this trio was different from the other Ste. Barbe students vividly described by one of the teachers there at the time: “While their professor shouts himself hoarse, these lazy idlers sleep or think of their pleasures. One, absent, will get a friend to answer for him at roll call. Another has lost his shoes.... This fellow is sick, that one is writing to his parents...and then we have the day-student loafers from the town.”

Peter began to help Ignatius in his studies; Ignatius slowly became a dear friend and counselor to whom Faber unburdened his troubled inner life. Ignatius could understand it well; he had experienced the same trials of scruples, temptations, uncertainties that had long bedeviled Peter. These burdens never completely left Faber, but he learned from Ignatius both how to deal with them and how to help others in the same circumstances.

In 1538, after finishing these studies and unable to go as pilgrims to the Holy Land as they had hoped, the first 10 Jesuits-to-be presented themselves to Pope Paul III in Rome to serve him in his role of pastor of the universal church. He immediately dispatched them to a great variety of ministries. Faber went first to Parma. From that moment until his death, pope, emperor, king, cardinals, nuncios and his Jesuit superior, Ignatius, would turn Peter’s life into an extended journey of pastoral activities. That life became a litany of cities and friendships, many of the latter face-to-face, others nurtured by letters. His correspondents ranged from Ignatius to Guillaume Postel, a famous French humanist; from Peter Canisius, the future apostle of Germany, to the king of Portugal; from young men whom he had recruited to this new Society of Jesus to the prior of the Carthusians of Cologne.

What does St. Peter Faber have to say to Jesuits today?
Adolfo Nicolás

In 1540 the Pope sent Faber to Worms with the representative of Charles V, the Holy Roman Emperor, to a meeting there with Protestant leaders. Peter was the first Jesuit to enter Germany. Given the condition of the Catholic Church there, he said that one “would never again be surprised at anything…except the puzzling fact that there are not even more Lutherans.” For instance, the emperor remarked of the Catholic archbishop of Cologne, where Faber soon also worked, “How would that poor man go about doing any reforming? In his long life he has not celebrated Mass more than three times. He doesn’t even know the Confiteor.”

In every place he went, Faber preached, gave the Spiritual Exercises, heard confessions, engaged in personal spiritual direction and founded Jesuit communities. In a letter to another Jesuit, he quite decisively set down two principles for any work among the reformers: “If anyone would be of help to heretics in this day and age, first, he must look upon them with great charity and love them in truth. And he must close his mind to all that would tend to lower his affection for them. [Secondly] rapprochement should be established with them in areas in which there is concord between us rather than in those things which tend to point up our mutual differences.” And all of this occurred while both Protestant and Catholic theologians were fulminating anathemas at each other. But as one of the most violent spokesmen among the Catholics remarked wonderingly of Faber, “I have met a master of the life of the affections.” Simão Rodrigues, one of those first Jesuit companions, wrote of Faber, “He has a genius for friendship. He has such charm and grace in dealing with people as I have not seen in anyone else.” And Ignatius said that of all the Jesuits, Peter was the most accomplished as a director of the Spiritual Exercises.

In one assignment after another, frequently in ill health, in seven years in more than 25 cities in what are today Italy, Germany, France, Spain, Switzerland, Belgium and Portugal, Faber preached and modeled the gentle and compassionate Christ. He planted seeds of renewal and then had to leave the field for others to gather the harvest. It was a hard self-surrender to leave friends he had made in every place when he was asked to take on yet another new responsibility. If one adds together all the twists and turns of his travels, they probably totaled some 15,000 miles, seldom on horseback, often on mule back and very often on foot. This was Faber’s outer journeying.

His inner journey is recorded in part in his 150 letters and most especially in his Memoriale, a sort of spiritual autobiography. It was written on the run, between mid-1542 and early 1546, in the midst of all of his activities. The journal begins, “Bless the Lord, O my soul and forget not all his benefits.” It is a remembering of God’s deeds in Faber’s life, a continuing dialogue with God as the primary partner and sometimes also with the saints, the angels (to whom he had a special devotion), his Jesuit brethren and the “spirits” of the cities he passed through. Faber’s side of the conversation exhibits his desires, the spiritual “motions” he experienced, discernment of their meanings and requests for enlightenment. Increasingly he speaks of heightened spiritual “perceptions,” as he described them, “an immediate knowledge with a loving understanding…of God the Lord himself,” and of being “lifted up to the countenance of God.” One of his brief prayers sums up his fundamental Trinitarian spirituality: “Father, in Jesus’ name, give me your Spirit.”

Often, too, Faber prays with both great affection and realism for specific individuals, some of them surprising choices. “Eight personages came to mind and I felt the desire to remember them in prayer and to overlook their faults. They were the supreme pontiff [Paul III], the emperor [Charles V], the king of France [Francis I], the king of England [Henry VIII], Luther, the Turk [the Muslim Sultan], Bucer, and Melanchthon [two very prominent reformers]…and at the prompting of the spirit there rose up in me a certain feeling of compassion for them.” Not many people of that time on either side of the Reformer/Catholic divide were recorded as praying for their opponents.

Faber was, of course, a man conditioned by the circumstances of the 16th century. But some of the circumstances of our times are analogous to those of his era, and the way Faber responded to them might well be appropriate for us in the 21st century. Time after time, Faber was called to move from one place, one responsibility, to another, as is true so often for people today. But he did so convinced that everywhere he was supported both by God’s presence and by a community of friends on this earth. Second, he experienced deeply the often wrenching changes around him in the world and in the church, like those that also exist today. But in the midst of doubt and discouragement, he saw the world and the church with a sense of measure, proportion and patience. Next, his sensitivity to his own interior states helped him to be equally sensitive to those circumstances of the men and women of such great variety with whom he came in contact. Finally, he desired an ever deepening relationship with God. He knew this depended first and foremost on the initiative of God’s unfailing love. But he also knew that this love was most often mediated through the companionship of others, who also sought such a relationship with God.

Finally, summoned by Pope Paul III to serve at the Council of Trent, Faber, already in ill health, made his last journey from Madrid to Rome. There in 1546, only 40 years old, he died surrounded by his brethren at the Jesuit residence.

Faber now rests at the threshold of the Society of Jesus in another sense. At the Gesù, the principal church of the Jesuits in Rome, pilgrims venerate the relics of Ignatius and Xavier at two magnificent altars. But when the Gesù was built in the late 1500s, it was impossible to distinguish Faber’s bones from those of all his Jesuit brethren who had been buried over the decades at the old Jesuit residence and church. So all those remains were gathered together and reburied in a crypt directly underneath the main entrance to the Gesù. Every pilgrim who walks into that church today from those many places where Faber evangelized and for which he prayed walks, albeit unknowingly, directly over and into the presence of the final resting place of a mystic, a missionary, a spiritual guide, a Jesuit and now, at last, a saint.

John W. Padberg, S.J., a historian, is the director of the Institute of Jesuit Sources, Saint Louis, Mo.