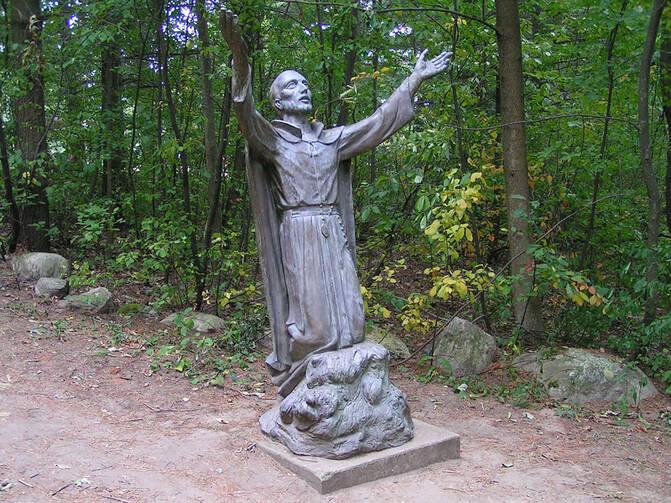 In my Jesuit community during theology studies, we had a little poster about the founders of four great religious orders, which said: Bernardus Valles, Colles Benedictus amavit, Oppida Franciscus, Magnas Ignatius urbes.

Which translates as: "Bernard loved the valleys, Benedict the hills, Francis the small towns, and Ignatius the great cities."

Each of these men had different desires, inclinations, and hopes that took them to different places in their lives and brought them to different ways of being. The Jesuit saints show us this, too.  And part of the joy that comes with reading the lives of the saints is that you see how God celebrates individuality.

A passage in Leo Tolstoy's War and Peace illuminates this. One of the main characters, Pierre, is taken prisoner by French soldiers, and is almost executed. Previously, Pierre had viewed people as generic groups, rather than as individuals. But his near-encounter with death leads to an epiphany. Tolstoy writes, "This legitimate particularity of each individual, which used to excite and irritate Pierre, now became a basis for the sympathy he felt for, and the interest he took in, other people."

Every Jesuit saint was a member of the Society of Jesus, lived vows of poverty, chastity and obedience in community; and were formed by the Spiritual Exercises. But even with those important commonalities, no one was alike. To that end, let me tell you about one of my Jesuit heroes, whose feast day we celebrate today.

Jean de Brébeuf was born in Normandy, France. According to Joseph P. Donnelly, S.J., one of his biographers, his family was of the "lesser nobility" who worked the land beside the peasants residing there. As a boy, then, Jean would have "herded sheep, fed the stock and, when old enough, took on heavier chores." Little is known of Jean's early life, though he likely studied at the University of Caen, where he probably met the Jesuits.  He entered the Jesuit novitiate in Rouen in 1621. For the next few years he taught boys at the Jesuit school in Rouen. But this would not be the future that God had in store.

In 1624, the Franciscans, who had operated the "missions" to the Huron peoples in New France since 1615, appealed to other French religious orders to send assistance. Among the first to sail was Jean de Brébeuf , now a tall, robust man of 32.

Jean and his companions reached Quebec on June 19, 1625, and immediately began to prepare for his journey to the Huron nation. Happily, he had a great talent for something that would prove critical in his work. The great explorer Samuel de Champlain wrote about Brébeuf, "[H]e had such a striking gift for languages that…he grasped in two or three years what others would not learn in twenty."

That facility would assist him in working with a people with whom he shared little in common, save their common humanity. To enter into their world Jean resolved to do everything according to their customs, no matter how strenuous, eating their food, sleeping as they did, working as hard as they did. Here is a powerful echo of the Call of the King, from the Spiritual Exercises, in which one is asked to "labor as Christ labors."

Every Jesuit saint was a member of the Society of Jesus, lived vows of poverty, chastity and obedience in community; and were formed by the Spiritual Exercises. But even with those important commonalities, no one was alike

Jean's first journey to the Huron homeland, 800 miles from Quebec, was grueling. Jean tied his shoes around his neck, hiked up his cassock and climbed into the bark canoe. This passage, from Donnelly's biography, Jean de Brébeuf, first published in 1975, made a lasting impression on me when I read it as a novice:

On a journey the Indians spoke little, saving their energy for paddling their average of ten leagues, about thirty miles a day. Squatted on their haunches, immobile for hours on end, except for the swing of their arms and shoulders wielding the paddle, they generally had no small talk. Rising at dawn the Hurons heated water into which they dropped a portion of coarsely pounded corn….[After] their scanty meal, the Hurons launched the canoes and began another day of silent travel. In the evening, when the light began to fail the Indians, making camp for the night, ate their [corn meal] and stretched out on the bare ground to sleep. The swarms of mosquitoes, deer flies, and other insects…seemed not to bother the Indians….Then at dawn the whole painful process began again.

Once he arrived, the tall Jean was given a name, "Echon," perhaps a version of first name, or a word meaning in the Huron language, "man who carries the load." Here is Brébeuf himself, writing to the Jesuit in Quebec, in the letters now known as the Relations, describing an aspect of his travels: "Now when these rapids or torrents are reached, it is necessary to land, or carry on the shoulder, through woods, over high and troublesome rocks, and all the baggage and canoes themselves. This is not done without much work…"

In addition to learning their customs and beliefs, Jean wrote a Huron grammar and translated a catechism in the local language. Brébeuf would spend three years among these families before being asked to return to Rouen in 1629, after political difficulties made it harder for the French to remain. Despite the normal prejudices about the native peoples common at the time, Jean had grown to admire and love those with whom he lived. At times their generosity astonished him:

We see shining among them some rather noble moral virtues. You note, in the first place, a great love and union, which they are careful to cultivate….Their hospitality to all sorts of strangers is remarkable; they present to them, in their feasts the best of what they have prepared, and, as I said, I do not know if anything similar, in this regard, is to be found anywhere.

When he returned to New France in 1635, he was cheerfully welcomed by his Huron friends. Immediately he and Antoine Daniel, another Jesuit, began their work in earnest. (They were one of several Jesuits working in the region at the time.) Near a town called Ihonotiria, near current-day Georgian Bay in Canada, Fathers Brébeuf and Daniel began teaching the people about Christianity. They were later joined by two other French Jesuits, Charles Garnier and Isaac Jogues.

With the arrival of their new companions, though, a smallpox epidemic broke out among the Jesuits, which spread to the Hurons, who had no immunity whatsoever from the illness. The missionaries cared for the sick and baptized thousands of Hurons. But because they had baptized those who were dying, the Hurons concluded that baptism brought death, and so many of the Hurons began to turn against the "Blackrobes." Brébeuf then moved to Sainte-Marie, a center for the Jesuits in the area.

Jean de Brébeuf's torture was among the cruelest any Jesuit has had to endure.

Then a new danger arose. Rumors (false ones) circulated that Jean was in league with a sworn enemy of the Hurons, the Seneca clan of the Iroquois. So he prudently moved to another site, Saint Louis. On March 16, the Iroquois attacked the village and took the Hurons, who were mainly Christians, along with Jean and another Jesuit, Gabriel Lalement, prisoner. He knew that the possibility of martyrdom was imminent.

Jean de Brébeuf's torture was among the cruelest any Jesuit has had to endure. (You might want to avoid this next paragraph if you're squeamish.)

The Iroquois heated hatchets until they were glowing red and, tying them together, strung them across his shoulders, searing his flesh. They wrapped his torso with bark and set it afire. They cut off his nose, lips and forced a hot iron down his throat, and poured boiling water over his head in a gruesome imitation of baptism. They scalped him, and cut off his flesh while he was alive. Finally someone buried a hatchet in his jaw.

After 14 years as a missionary, Jean de Brébeuf died on March 16, 1639. He was 56. At his death his heart was eaten as a way for the Iroquois, who were stunned by his courage, to share in his bravery. Eight other Jesuits were martyred around this same time. Their feast day (Oct. 19) is referred to as either the Feast of the North American Martyrs or the Feast of St. Isaac Jogues and Companions. Let us not forget this great Companion.