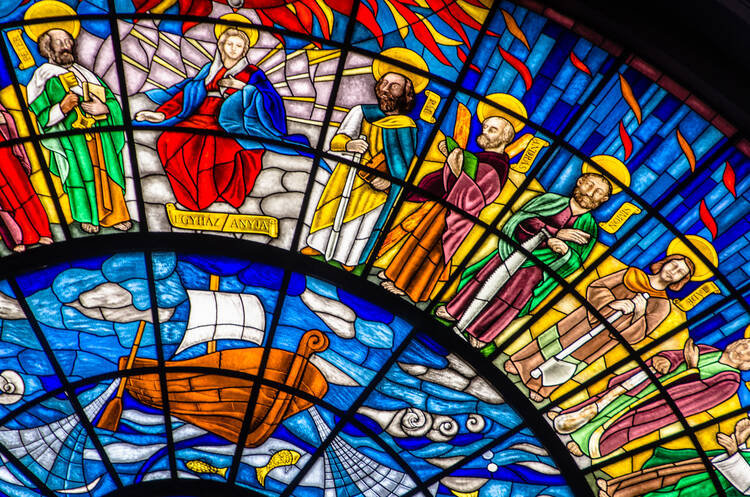 The best-known prayer among American Catholics, after the Our Father and the Hail Mary, may be the one to Anthony of Padua, which goes, Saint Anthony, Saint Anthony, please come around. Something is lost and cannot be found. How many times have you turned to the Portuguese-born Franciscan after losing your keys?
There are petitionary prayers for almost every need. Looking for a boyfriend or a husband? Try a prayer to Mary’s mother: Saint Anne, Saint Anne, find me a man. An addendum was recently suggested to me during a talk on the saints at a local parish. After I mentioned that popular intercessory prayer, one woman in the audience shouted out the correct final line.

As fast as you can! she said to general laughter. Another woman in the audience said, Now I finally know why it’s been taking so long in my case: I wasn’t saying the last line.

Now, I know that some readers may already be rolling their eyes. The concept of intercession makes many contemporary Catholics uncomfortable. (And I haven’t even mentioned the prayers to Mother Cabrini and Thérèse of Lisieux to find a parking space.) Often when I mention praying for help to a particular saint, Jesuit friends will grimace or, with polite silence, communicate their theological disapproval. Why the distaste?

First, it smacks of superstition. (What is the difference between those rhyming prayers and a magic spell?) Second, it irks those who feel that intercessory prayer encourages believers to bypass God. (Why not pray to God directly?) Third, it may seem frivolous, even absurd, to ask members of the communion of saints to search for something as minor as a lost wallet. (Admittedly, it is odd imagining St. Anne searching for husbands from her heavenly post.) Fourth, it can reduce the saints to people whose primary role is reduced to obtaining favors for us. (Find me a man!) Overall, it is said to be inconsistent with a mature Christian theology.

But intercession has a distinguished history that reaches back to the earliest days of Christianity. In her book Friends of God and Prophets, Elizabeth Johnson, C.S.J., delineates two main historical models of devotion to the saints: companion and patron. Many Catholics may be more comfortable with the saint as companion, the one who accompanies us along the way to God, and whose story and example helps us to lead a more Christian life.

But the patron model is also an integral part of the Christian tradition. In her book, Sister Johnson notes that intercessory prayers can be traced to requests scratched as second-century graffiti on the walls near the martyrs’ graves in Roman cemeteries. Calling upon the martyrs was a specific way of evoking the solidarity that existed between pilgrims on earth and those who had been sealed with the victory of Christ, she writes.

Today this part of Catholic heritage finds echoes not simply in expressions of personal piety but also in liturgies celebrated by the whole church. It appears most visibly during the Easter Vigil and at ordination Masses, with the chanting of the ancient Litany of the Saints. In response to the invocation of the names of the saints, the congregation sings, Pray for us. Such prayers are expressing the same desires as those of the early Christians.

For me, it is both natural and sensible to call on the saints for help from time to time. Since we often ask for prayers from friends on earth, why would we not turn to our friends in heaven?

When it comes to serious matters, like a life-threatening illness, the intercession of the saints is easy to explain. Why wouldn’t someone as generous as, say, Thérèse of Lisieux want to help us during difficult times, just as she prayed for her sisters, for missionaries in Vietnam, and for a notorious murderer, during her life? The doctor of the church specifically hoped for this role in the afterlife. After my death I will let fall a shower of roses, she wrote. I will spend my time in heaven doing good on earth.

Even with less significant matters, like the lost set of keys, the saints may be happy to help us, much as a big brother or sister will bend down to help a younger sibling tie a stray shoelace or zip up a winter coat.

How does all this work? Beats me. All I know is that when I get to heaven I plan to do a lot of thanking, to the Father, Son and Holy Spirit, and to the Blessed Mother, to be sure, but also to quite a few patrons and companions. And given my forgetful nature, I’ll start with St. Anthony, who for over 40 years has faithfully been coming around.

James Martin, S.J., is an associate editor of America.

@jamesmartinsj
Show Comments (
1
)
Comments are automatically closed two weeks after an article's initial publication. See our comments policy for more.
muhammad ajaz
14 years 11 months ago
Hello Fr. Jim: I do exactly that for almost anything - and you know what?, it helps me spiritually knowing that I can go to anyone in the church triumphantfor help. Melinda